Murder in the Courtroom! 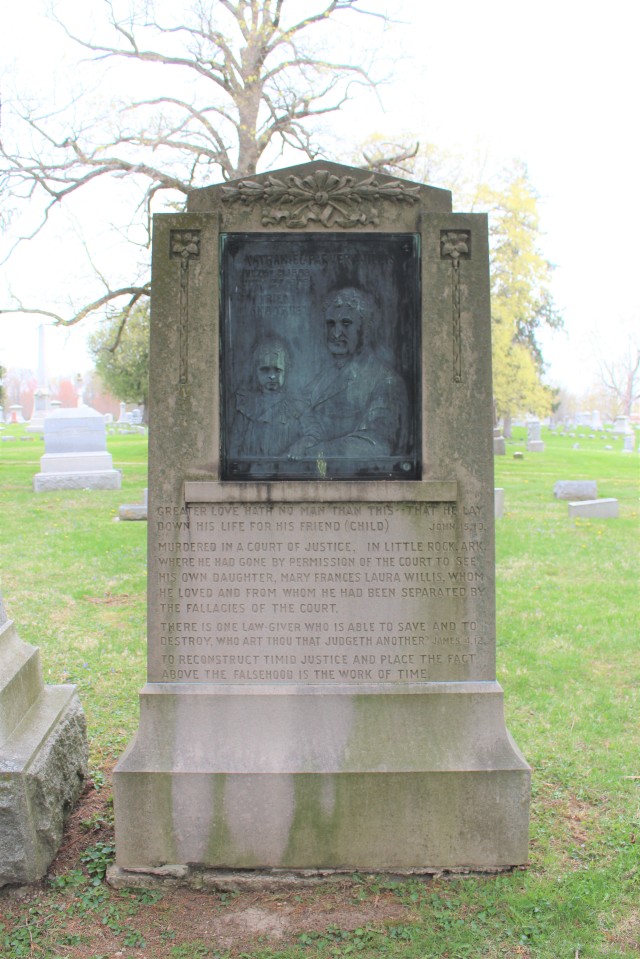 GREATER LOVE HATH NO MAN THAN THIS – – THAT HE LAY DOWN HIS LIFE FOR HIS FRIEND (CHILD) JOHN 15:13

MURDERED IN A COURT OF JUSTICE, IN LITTLE ROCK, ARK. WHERE HE HAD GONE BY PREMISSION OF THE COURT TO SEE HIS WON DAUGHTER, MARY FRANCES LAURA WILLIS, WHOM HE LOVED AND FROM WHOM HE HAD BEEN SEPARATED BY THE FALLACIES OF THE COURT.

THERE IS ONE LAW-GIVER WHO IS ABLE TO SAVE AND TO DESTROY, WHO ART THOU THAT JUDGETH ANOTHER?  James 4:12

TO RECONSTRUCT TIMID JUSTICE AND PLACE THE FACT ABOVE THE FALSEHOOD IS THE WORK OF TIME.

The inscription on the Nathaniel Parker Willis tombstone refers to his tragic murder.  Parker Willis, the oldest son of Abner Willis and Frances Ellen Willis, was born in Crawfordsville on August 21, 1868.  He was a bright student and a fast study graduating from Crawfordsville High School with a scholarship to Wabash College which he turned down.  Instead he went into the printing business as a apprentice at the local newspaper office, the Crawfordsville Review as a compositor.  Having mastered it, he took a job as a mail carrier, but quickly changed careers again to take over his father’s photography business, which became a huge success, winning him local, state, and national prizes and accolades for his artistic photographic abilities.  Again, Parker Willis changed careers, this time setting up in Chicago where he began selling a cure for the “liquor habit.”

While Parker Willis was in Chicago he fell in love and married but his wife of only a few weeks died.  Several years later he met and married Hattie Bell.  Reportedly, the marriage was not a happy one, but they did produce a daughter, Mary Frances, who Parker Willis adored.  The couple moved from Chicago to Cincinnati and then to Indianapolis.  The moves did not seem to help the relationship and Hattie and Parker Willis divorced.  Hattie moved from various places often secreting the daughter away from Parker Willis without telling him where she was.  Eventually Hattie took Mary Frances to Little Rock, Arkansas, where she married W. Y. Ellis.  Parker Willis stayed devoted to his daughter and worked tirelessly to secure visitation rights.  But on July 27, 1909, when he was petitioning the court to allow Mary Frances to stay with him for a two-week period, he was cut down.  Suddenly, without warning or provocation, W. Y Ellis stood up and shot Parker Willis to death in the courtroom.  In the murder trial that followed, letters from the deceased man revealed him to be a tender and devoted who longed to be able to spend time with his only child.

“Citizens Pay Last Tribute to Former Resident, who Was Shot Down In Arkansas Courtroom.

“CRAWFORDSVILEE, Ind. Aug. 1.—The body of Nathaniel Parker Willis of Indianapolis, who was murdered in the Court House at Little Rock, Ark., last Tuesday afternoon; was brought here by a special traction car Sunday, accompanied by many Indianapolis friends and relatives.  The body was taken to the lodgeroom of the Crawfordsville Commandery No. 19, Patriotic Order of Sons of America.  The lodgeroom was thrown open to the public and hundreds of people viewed the remains, which lay in a casket banked with flowers.  The public was then excluded from the lodge services, only the immediate friends and relatives and the members of the P.O.S. of A being permitted to remain.

“Marion E. Clodfelter delivered the funeral oration, in which he told of the life of Parker Willis and ended with the reciting of the story of his death.  At the conclusion of the funeral services the body was escorted to Oak Hill Cemetery, where it was interred by the side of the murdered man’s father, under the ritualistic burial ceremonies of the order.

“The funeral procession was one of the longest ever seen in Crawfordsville, there being at least 100 carriages line.” 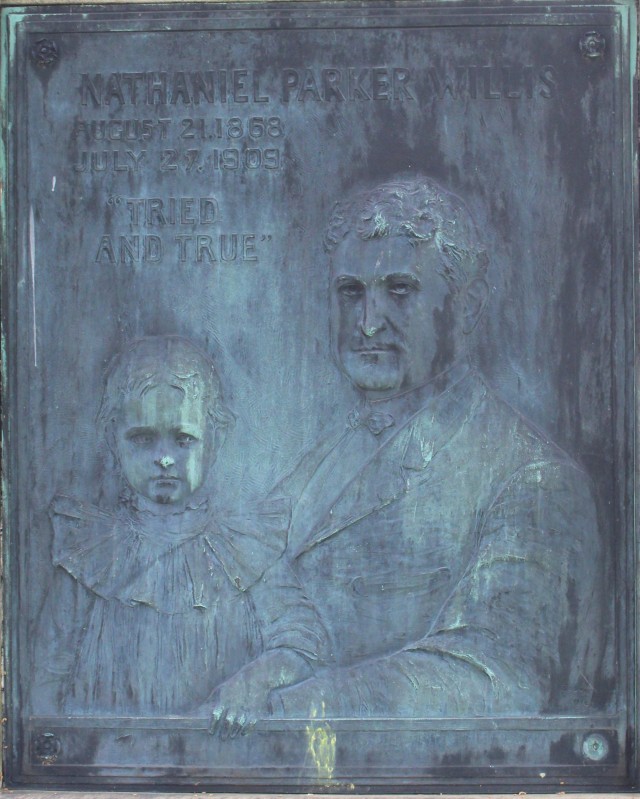 The tombstone in the Oak Hill Cemetery in the city of his birth,  Crawfordsville, Indiana, features a bas-relief that commemorates the love between the father and his daughter.  The commissioned bronze was created by George Julian Zolnay.

The Hungarian-born sculptor Zolnay (July 4, 1863 – May 1, 1949) created monumental works of arts including the memorial at the edge of Centennial Park in Nashville, Tennessee, for fallen World War I soldiers. This sculpture shows the full force and emotion of his work. A young soldier, still clutching his rifle lies in the lap of a young woman who cradles him as he dies. Her cape covers them.

Just like other great artists of the time, Zolnay was commissioned to create cemetery memorials. The seated mourning figure was commissioned by David Rowland Francis (October 1, 1850 – January 15, 1927), who served in various political posts such as, Mayor of St. Louis, Governor of Missouri, United States Secretary of the Interior, and Ambassador to Russia. Zolnay’s mourning figure in the Bellefontaine Cemetery, at St. Louis, Missouri, wears a cloak that casts a shadow over her face giving the statue a haunting look.

The sculpture Zolnay created for Confederate President Jefferson Davis (June 3, 1807 – December 6, 1889) in the Hollywood Cemetery, at Richmond, Virginia, shows a proud and unrepentant man. Davis was a graduate of the U.S. Military Academy at West Point served six years in the United States Army and fought in the Mexican American War (1846–1848). From 1853 to 1857 under President Franklin Pierce, Davis served as Secretary of War. He was also elected as the Democratic U.S. senator from Mississippi. But, Davis, a believer in each states’ right to secede from the Union, was inaugurated as the President of the Confederate States of America on February 18, 1861. He became inextricably linked to the Confederacy and a symbol of the lost cause. 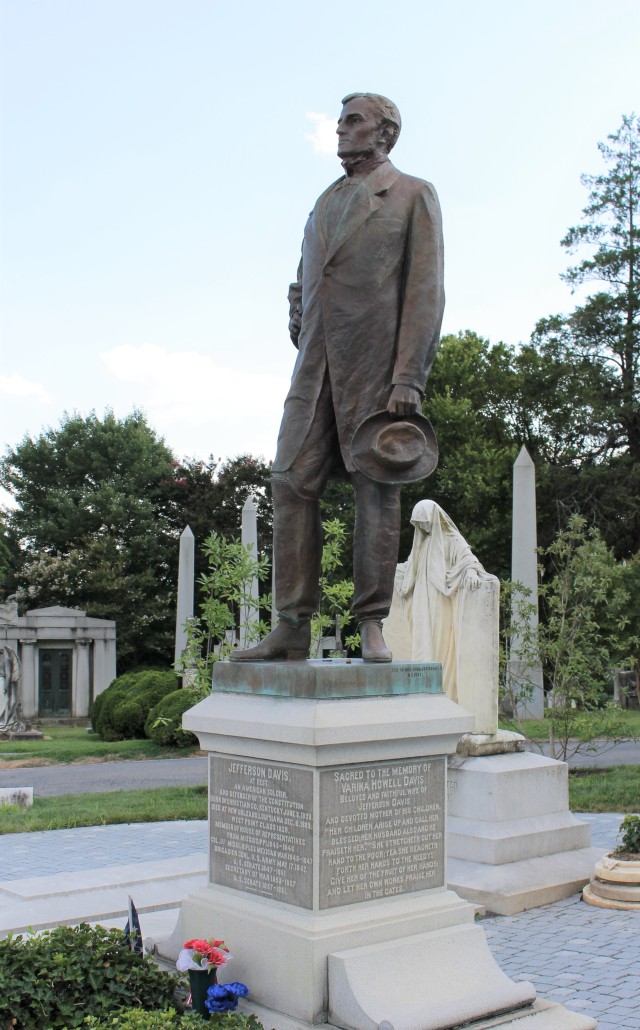 This entry was posted in Artists, Uncategorized. Bookmark the permalink.