The Coded Messages of Flowers

Posted on June 7, 2020 by gravelyspeaking

The gravestone for Nathaniel and Madeline Merion can be found in the Green Lawn Cemetery in Columbus, Ohio.  Atop the base is the statue of a mourning figure.  In David Robinson’s book, Saving Graces, depicts photographs of mourning figures from some of the most famous cemeteries in Europe depicting sculptures of beautiful, young, and voluptuous women often wearing revealing clothing as they mourn the dead. However, unlike her European counterparts, the Victorian “weeper” was usually not voluptuous and often portrayed as androgynous, dressed modestly in a diaphanous gown loosely fitted and flowing beyond her feet.

Often these sepulchral figures are referred to “saving graces” and often as “weepers,” and are intended to represent mourning and sorrow.  Since ancient times, women have been the ones in our families and in our society, who showed grief and shed tears over those lost to death. Like the women in ancient times, these sculptures are depicted as standing over the graves in sorrow.

Robinson identified four categories of “saving graces”–first, women completely overcome by grief, often portrayed as having collapsed and fallen limp on the grave. Second, are the women who are portrayed reaching up to Heaven as if to try to call their recently lost loved one back to Earth.  Third, are the women who are immobile, and grief stricken, often holding their head in their hands distraught with loss.  Lastly, he describes the last category of “saving graces” as the mourning figure who is “resigned with the loss and accepting of death.”  The mourning figure on the Merion monument appears to be in the last category. 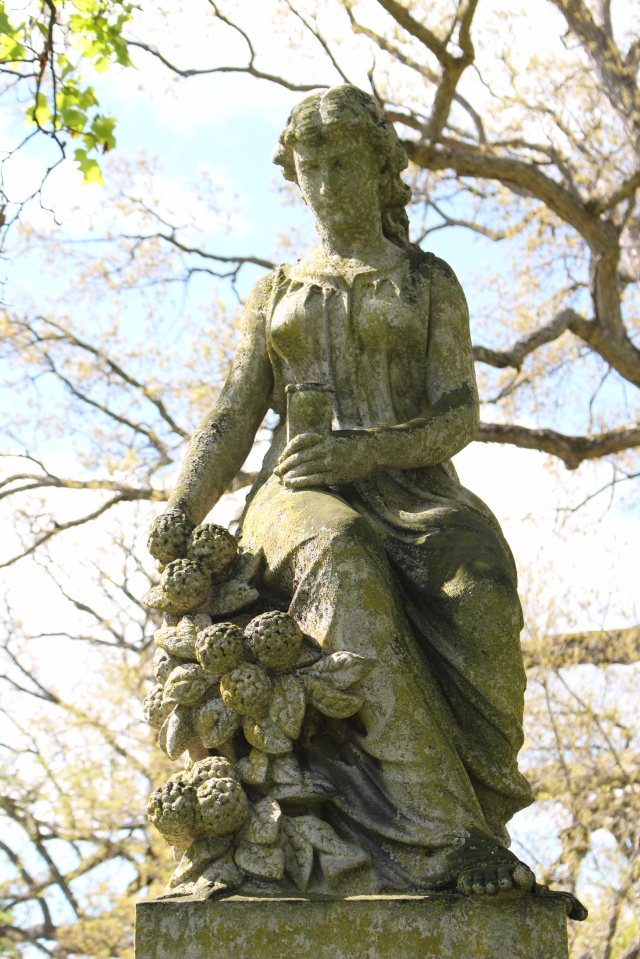 In this example the figure is holding an hourglass in one hand and what looks to be a large bouquet of hydrangea in the other.  The symbolism of the hourglass is obvious—time is fleeting, as the long-running soap opera, Days of Our Lives, reminded us with their catchphrase,  “Like sands through the hourglass, so are the days of our lives.” The meaning of that catchphrase is clear–life passes by very quickly.  Life measured by the grains of sand slip through one side of the hourglass to the other in a flash.  The hourglass symbol on a gravestone, often shown with wings, represents the same thought of time fleeting by quickly.

The hydrangea, if that is what it is, is a bit of a mystery.  In Victorian times, flowers took on significance as a way to send coded messages; this was known as floriography from the Latin combining flora—“goddess of flowers”—and graphein—“writing.”

In 1884, Kate Greenaway, a popular author and illustrator published a book titled, the Language of Flowers.  According to her book, each flower had a meaning that was conveyed to the viewer or receiver of the flower or bouquet of flowers—for instance, the weeping willow represented mourning, the white lily represented purity, the Easter lily represented the Resurrection, and so on.

The book is a nearly complete listing of flowers along with their “secret” or symbolic meanings.  On page 22, she describes the meaning behind the hydrangea as “a boaster, Heartlessness.”  So, what could that cryptic message symbolize to the viewer of the monument?  Does Death, in this coded message, represent heartlessness?

This entry was posted in Saving Graces, Symbolism. Bookmark the permalink.

2 Responses to The Coded Messages of Flowers