The white marble gravestone for the Cafferata Family in the New St. Joseph’s Cemetery in Cincinnati, Ohio, depicts a mourning figure draped across the top of the stone.  The description of a mourning figure found on a door in the Woodlawn Cemetery in the Bronx and described in Sylvan Cemetery: Architecture Art & Landscape at Woodlawn, is fitting for the Cafferata monument: the “flowing figure of a grieving woman, seen… with drapery slipping down to revel a long and sinuous form, a play of curved and angular contour lines.…Her head is bowed and her face hidden from our view signifying the ravages of grief works on the harmony and beauty of the human face.”

These mourning figures are referred to as “weepers.”  Since ancient times, it has been the women who have been the ones in our families and in our society, who showed grief and shed tears over those lost to death. Like the women in ancient times, these sculpted mourning figures are depicted as standing over the graves in sorrow.  In funerary art the women often are depicted as beautiful, young, and voluptuous women wearing revealing clothing as they mourn the dead. 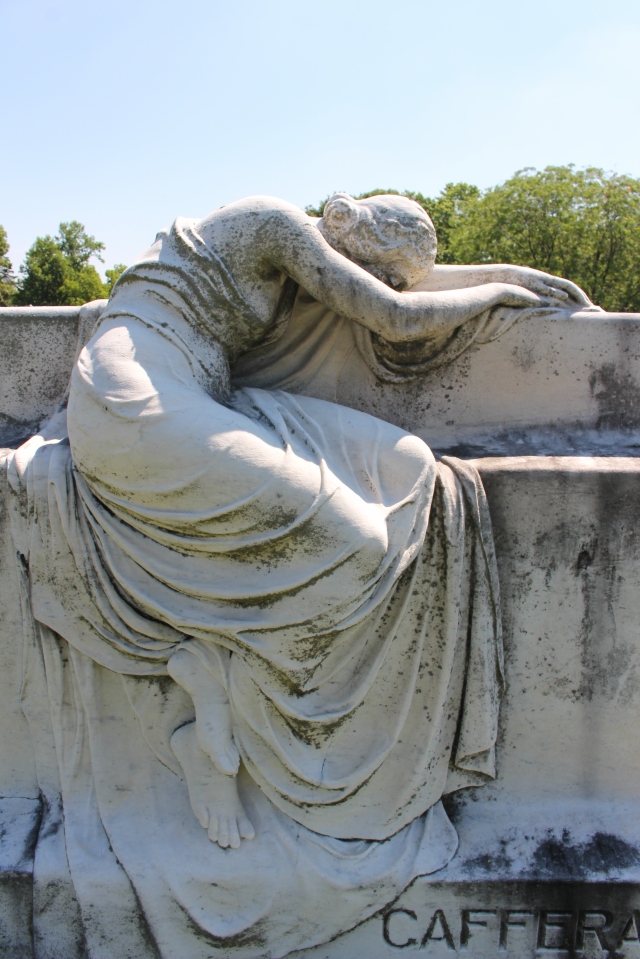 In David Robinson’s book, Saving Graces, which has been referenced many times in this blog, he describes these figures as “grieving women who signify how deeply the deceased is missed.  As symbolic mourners, their idealized beauty is spiritual, representing purity, passion, and commitment…But these women also serve as escorts on the journey ahead.  As designated companions in eternity, they are posted there to watch over and take care of the deceased.  Forever present, they are also forever young…these women symbolize the aspiration of eternal life, not the acceptance of death.  They may grieve, but they also comfort, and in this role, their beauty is more sensual than spiritual.”  Robinson notes that these mourning figures are “Pure on the one hand, sensual on the other, idealized yet lifelike…a very human combination of spiritual devotion and earthly desire.”

The Victorian “weeper” was usually not voluptuous and often portrayed as androgynous, dressed modestly in a diaphanous gown loosely fitted and flowing beyond her feet.