Posted on September 17, 2020 by gravelyspeaking

When William Foote died, his wife, Ida, commissioned the great artist Lorado Taft to create a memorial for her husband.  The bronze memorial that Taft created has become known as the Foote Angel, even though, it does not have wings.  The statue is an allegorical figure representing “memory.”  The work was completed in 1923.  The monumental figure sits on a bench, with a stylus in one hand and an unrolled scroll across her lap.

Lorado Zadoc Taft was one of the great American sculptors of the late 19th and early 20th Century. His parents, a homemaker, and a professor of geology, homeschooled young Lorado before he went on to the Illinois Industrial University (which later became the University of Illinois at Urbana—Champaign), where he received a bachelor’s and master’s degree. He then studied abroad at the famed Ecole Nationale Superieure des Beaux-Arts from 1880 to 1883, in Paris where he was widely recognized for his talent. He returned to the United States and settled in Chicago where he took up a career as an artist and a teacher. Taft was a widely published scholar on the topic and his work was highly sought after.  He was produced many private commissions and also many public works including The Soldier’s Monument in Oregon, Illinois, The Solitude of the Soul Sculpture at the Art Institute of Chicago, and The Fountain of Time in Chicago.

When Taft died, Taft’s ashes were scattered in the Elmwood Cemetery at Elmwood, his hometown. A monument to him was erected with a small replica of one of his own favorite sculptures mounted on top of a rose-colored granite base. 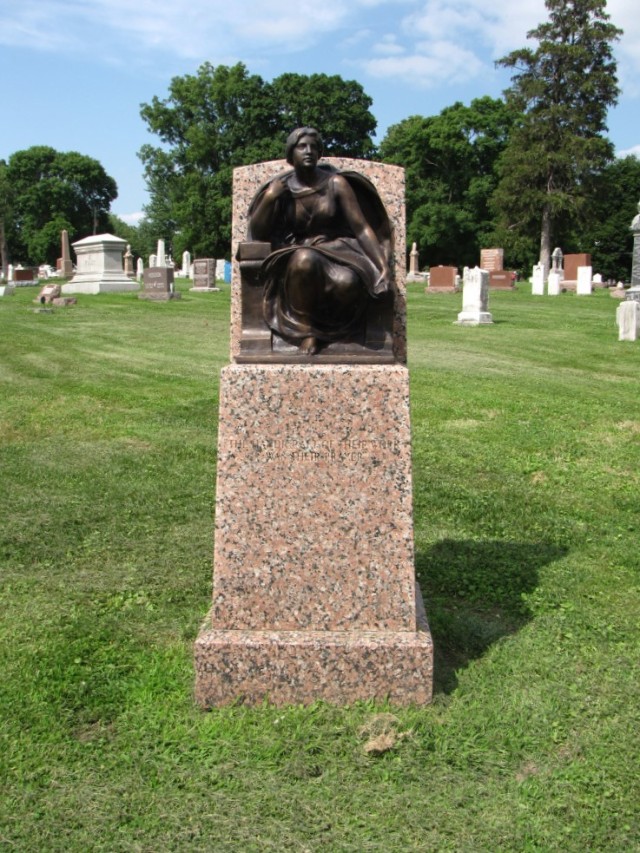 The plaque in front of his memorial states:

“MEMORY” IS A SMALL ORIGINAL REPLICA OF AN

IN WOODLAND CEMETERY IN JACKSON, MICHIGAN,

WAS A FAVORITE OF TAFT’S WIFE.

“MEMORY” WAS DEDICATED IN HIS HONOR AT THIS

This entry was posted in Angels, Artists, Famous graves. Bookmark the permalink.