Posted on September 12, 2020 by gravelyspeaking 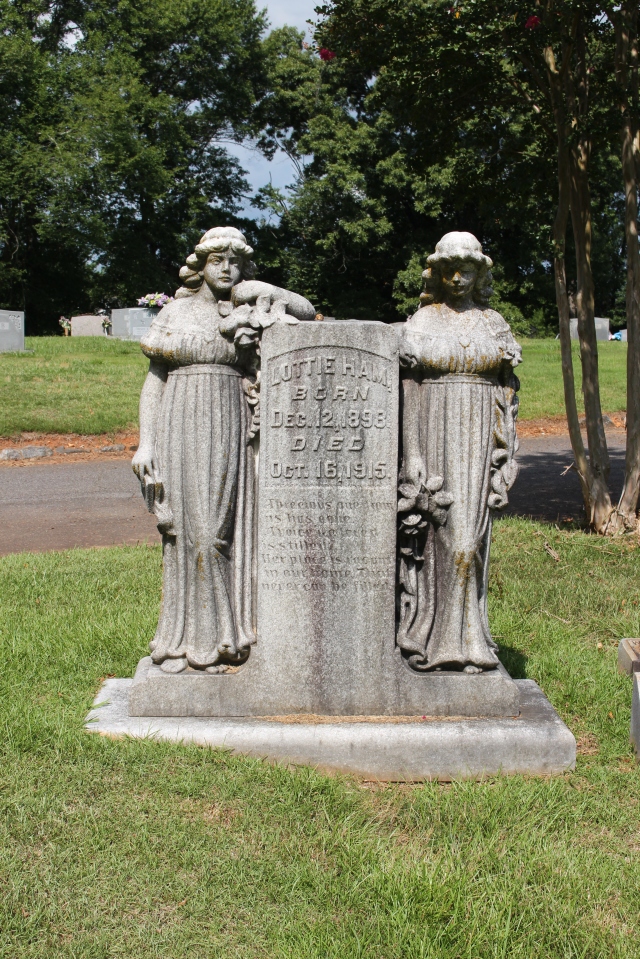 A precious one from

A voice we love

Her place is vacant

In our home That

Never can be filled.

The gray granite monument to Lottie Ham in the Crest Lawn Cemetery in Atlanta depicts two young women flanking a tombstone with the inscription bearing Lottie’s name and birth and death date and a well-known epitaph.  Lottie Ham was a 17-year old girl who was killed in a fire that swept through the Mutual Film Exchange Mion Building at no. 40—42 Luckie Street in Atlanta at 2:30 in the afternoon on Saturday, October 16th, 1915.

The Sunday morning, October 17th, Atlanta Constitution front page carried the following banner headline, “TWO GIRLS MEET DEATH IN FILM FIRE; NINE ARE INJURED BY FURIOUS BLAZE AT MUTUAL OFFICE.”  The article goes on to detail some of the tragedy, “…Two girls are dead, another dying and nine other victims’ badly burned and injured, as a result of a fire which originated in the inspector’s room of the Mutual Film exchange, Luckie and Cone streets…and quickly spread to all parts of the two-story building, cutting off every means of exit for those working in on the second floor…The cause of the fire is debatable.  Some of the employees state that it was caused by the fuse in the electrical machine which operates the renovator blowing out and the sparks igniting the highly combustible moving picture film in the inspector’s room.”

“C.E. Kessnick, manager of the Mutual Film Exchange, on the other hand, believes that the origin of the fire was spontaneous combustion.”

“Both young women who met their deaths were trapped in the small supply room at the rear of the second floor, into which they fled in order to escape out of the windows from the room  They were overcome by gas resulting from the combustion.”

According to the History of Service: Atlanta Fire Department Commemorative Yearbook, published by Turner Publishers in Paducah, Kentucky, 2000, “The fire originated on the ground floor near the stockroom and inspector’s room when a spark from an electric fan ignited scraps of film on the cutting table.  The flames flashed with explosive force through the first floor.  Most of the employees on this floor were able to escape without injury, but the flames swept up the stairs and enveloped the reels of highly combustible nitrocellulose film stored in the racks here…Thousands of feet of motion picture film were including several two-reel pictures of Charlie Chaplin, Harry Snubi, Harold Lockwood, Mabel Norman, Fatty Arbuckle and Chester Conklin.”

Over one hundred years have passed since Lottie’s gravestone was put in place, so it is impossible to know with certainty, the exact meaning of the two figures on the monument.  The two women could represent mourning figures, or seemingly depict two images of Lottie, as they are dressed the same, even with the same pendant necklace.  However, upon reading the news accounts, it just might be a tribute to Lottie and Clara who were together and died as a result of the fire—trapped in the same small supply room overcome by the gases released as the nitrocellulose film that was stored in the racks of the building went up in an explosive blaze. 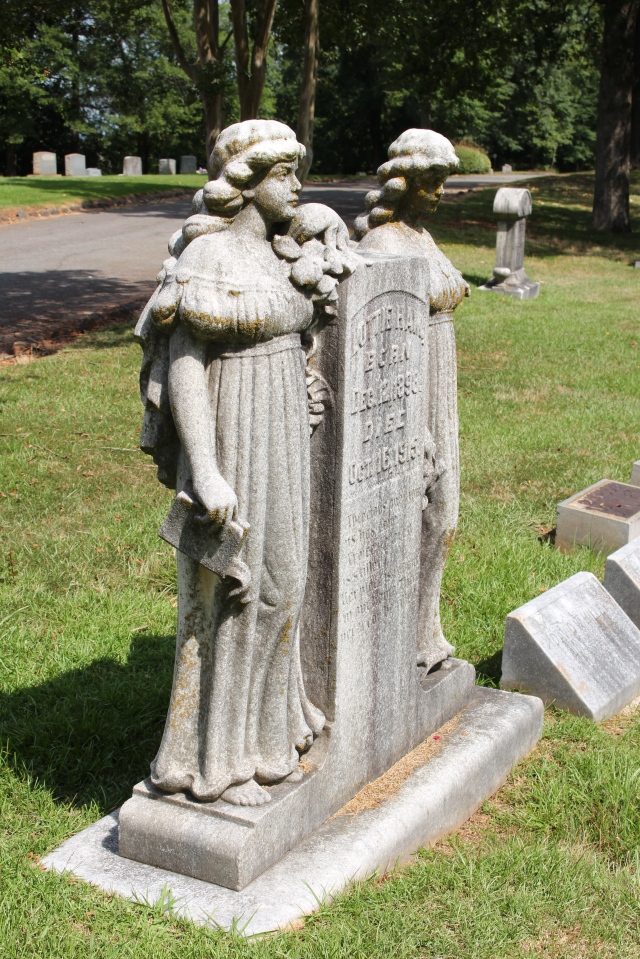