Presidential Recognition for a Storyteller

“I SEEM TO SEE BEFORE ME THE SMILING FACES OF THOUSANDS OF CHILDREN SOME YOUNG AND FRESH, AND SOME WEARING THE FRIENDLY MARKS OF AGE.  BUT ALL CHILDREN AT HEART AND NOT AN UNDFRIENDLY FACE AMONG THEM.  AND WHILE I AM TRYING HARD TO SPEAK THE RIGHT WORD I SEEM TO HEAR A VOICE LIFTED ABOVE THE REST SAYING YOU HAVE MADE SOME OF US HAPPY AND SO I FEEL MY HEART FLUTTERING AND MY LIPS TREMBLING AND I HAVE TO BOW SILENTLY AND TURN AWAY AND HURRY BACK INTO THE OBSCURITY THAT FITS ME BEST.”

Joel Chandler Harris was a famous writer who started his work in publishing as a “printer’s devil”—someone who apprenticed in a print shop performing non-technical assistance such as mixing ink and fetching materials for the journeyman printers.  Eventually, Harris worked as a journalist for newspapers, The Countryman, the Monroe Advertiser, the Savannah Morning News, and The Atlanta Constitution.  He also gained fame and as author and storyteller best remembered for his collection of Uncle Remus and Brer Rabbit stories.  Harris received acclaim and awards from many quarters but few spoke words of praise as glittering as those from President Theodore Roosevelt, who invited him to the White House to be honored for his contribution and said, “Presidents may come and presidents may go, but Uncle Remus stays put. Georgia has done a great many things for the Union, but she has never done more than when she gave Mr. Joel Chandler Harris to American literature.” 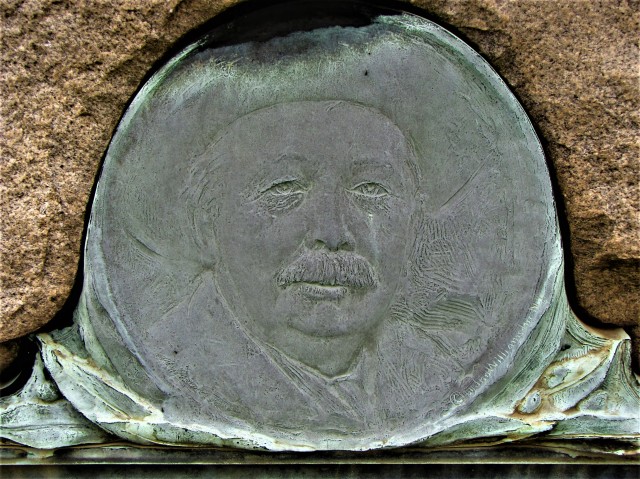 The Joel Chandler Harris gravestone can be found in the Westview Cemetery in Atlanta, Georgia.  The monument is a rough-cut granite stone with a bronze bas-relief portrait of Harris.  The bronze relief was sculpted by Allen George Newman III (August 28, 1875 – February 2, 1940) who gained fame for his sculpture, the Hiker, which depicted a soldier from the Spanish-American War.