Posted on February 13, 2020 by gravelyspeaking 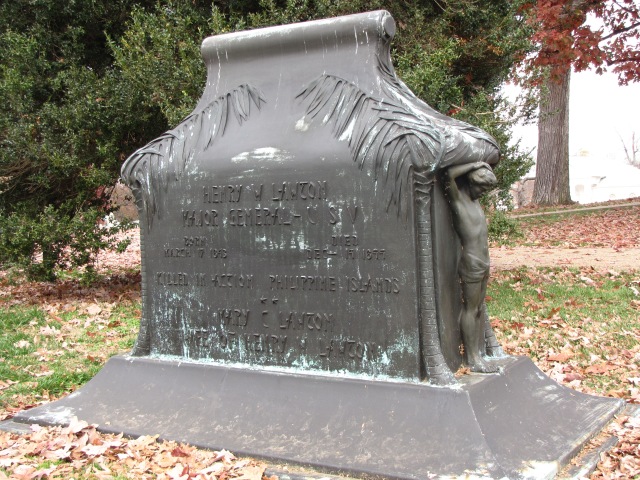 The Henry Ware Lawton marker is in the Arlington National Cemetery at Arlington, Virginia, on what was at one time the Robert E. Lee plantation. The Smithsonian sculpture database notes that the Lawton monument was created by sculptor Myra Reynolds Richards (1881-1934). 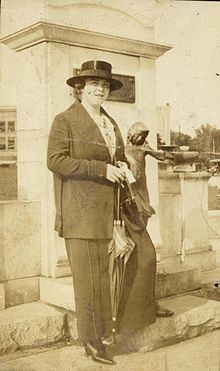 Richards was an Indiana-born sculptor and teacher. She studied at the Herron Art Institute in Indianapolis, in New York under famed artist Isidore Konti, and at the Academie Scandivave in Paris.  Her most notable works were created and exhibited in Indiana:

A statue of James Whitcomb Riley, the famous Hoosier poet, which was unveiled at the Hancock County courthouse at Greenfield, Indiana, in 1918; 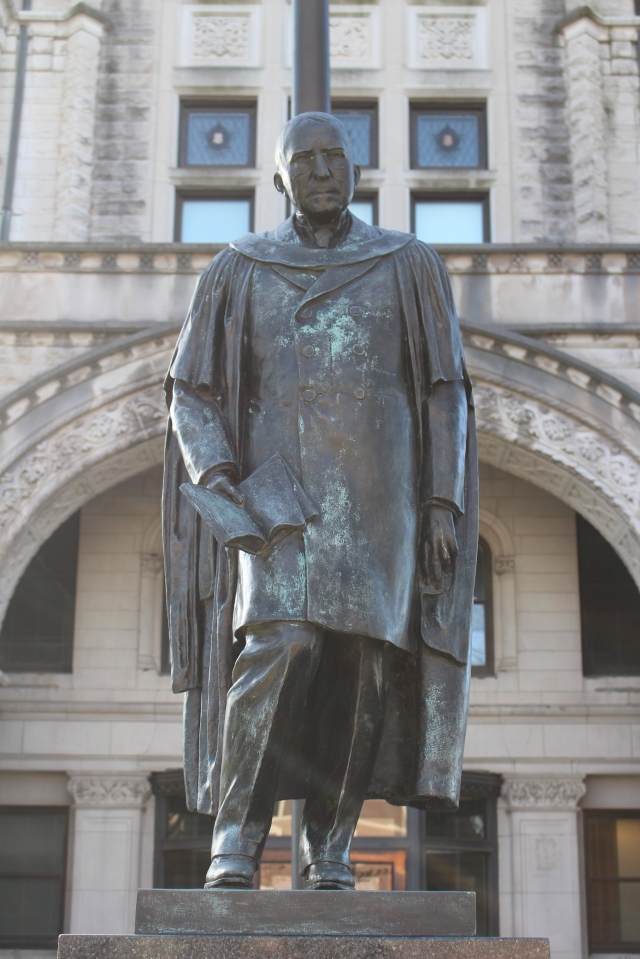 The Murphy Memorial Drinking fountain at the Carroll County Courthouse, also in 1918; 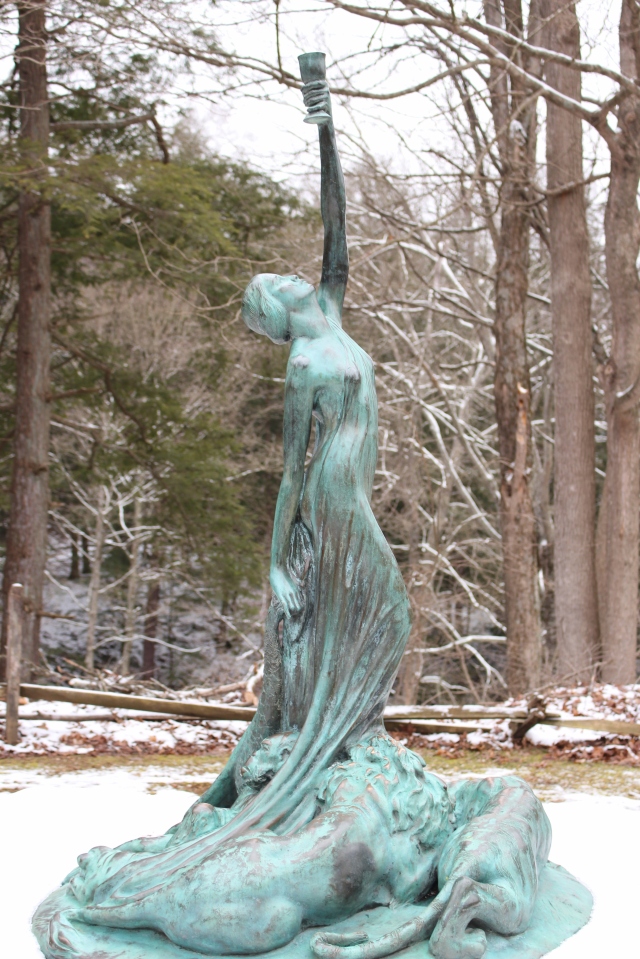 The Bird Boy unveiled in 1924 for the Columbus Central Middle School; and two works that were stolen—Pan and Syrinx created for the Depew Memorial Fountain in Indianapolis. 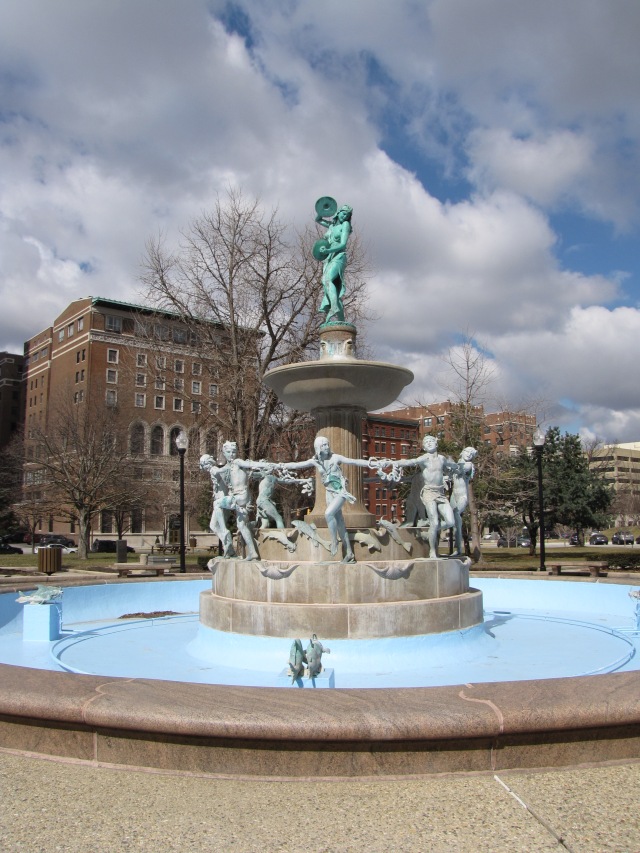 The bronze Henry Ware Lawton monument was cast by the Roman Bronze Works of New York. The Smithsonian sculpture catalog describes the work as “resembling an abstract casket, each corner composed of a palm tree with fronds extending to the tapered top. At each end is a boy wearing only a loincloth, with arms uplifted and hands clasped behind his head, sheltered by the palm fronds. The bottom of the gravestone widens and is multi-tiered. Each side of the gravestone is inscribed.”

It could also be described as a sarcophagus that portrays the jungle in which he fought his last battle in what was a long and distinguished career serving with distinction in the Civil War, the Apache Wars, the Spanish-American War and the Philippine-American War. 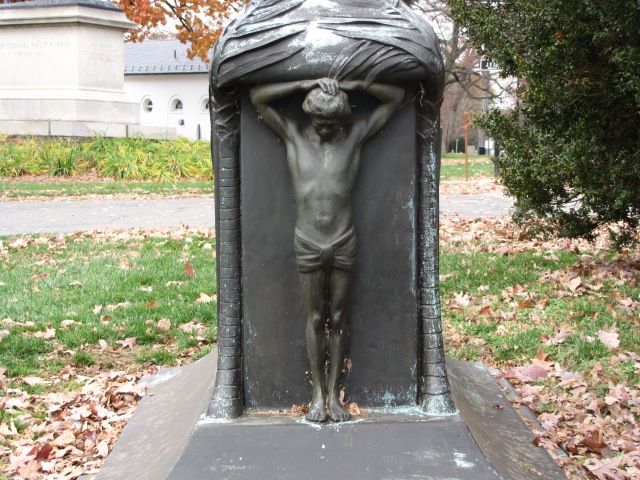 Lawton was born on March 17, 1843, at Maumee, Ohio, the son of George W. Lawton and Catherine Daley Lawton. The same year Henry Lawton was born, his father, a millwright, moved the family to Fort Wayne, Indiana. Most of Lawton’s youth was spent between Indiana and Ohio. Lawton volunteered for a three-month call in the Company E of the 9th Indiana Volunteers in the early part of the Civil War. When his three-month stint was up, he re-enlisted in the 30th Indiana Infantry. He fought in several major battles and by the end of the war had been promoted to Brevet Colonel after having received the Medal of Honor.

After studying at Harvard, Lawton accepted a 2nd lieutenant’s commission, and joined the 41st Infantry Regiment on July 28, 1866, which saw action in the Apache Wars. Lawton not only earned a reputation for being a fierce fighter but also compassionate toward the Native Americans. Lawton advocated on behalf of the Indians who were being cheated out of food allotments by the local Indian Agency.

In May 1898, after having served continuously in several different position in the armed forces, including as Inspector General, Lawton was appointed Brigadier General and given of the 2nd Division, which was being sent to Cuba during the Spanish-American War. 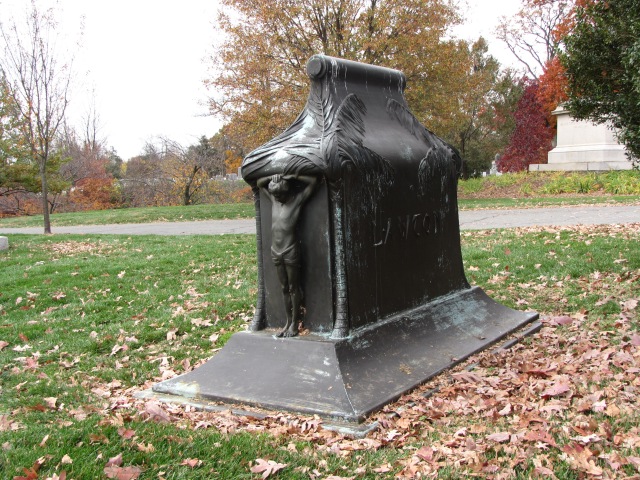 Lawton was transferred to the Philippine-American War front to command the 1st Division of Eight Army. It was during this campaign that Lawton received the nickname, The General of the Night, from General Emilio Aquinaldo, his opponent during the Philippine-American War. Aquinaldo is known that have said that “Lawton attacked him so often at night that he never knew when Lawton was coming.” Lawton was shot and killed on December 19, 1899, by a Filipino sharpshooter during the Battle of Paye. After a funeral service in the Paco Cemetery in Manila, Lawton’s body was transported to the United States and buried at Arlington National Cemetery on February 9, 1900. 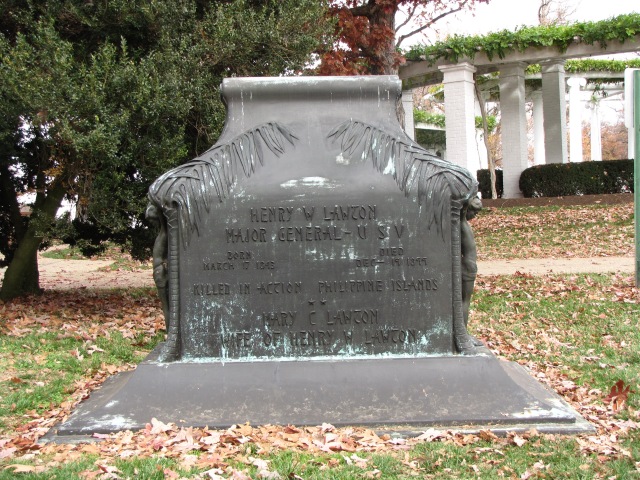