Posted on October 28, 2018 by gravelyspeaking

Homemade grave markers come in many shapes and made of many different materials.  This particular homemade marker in the St. Joseph’s Cemetery in south Indianapolis, Indiana, is made of metal.  Two crossbars form a Latin cross—the universal symbol for Christianity—and a medallion of Jesus is at the center of the cross.  A Rosary, a prayer to the Mother Mary with a tradition that dates back to St. Dominic in the 1200s, is draped over the cross.  This is a Catholic symbol representing devotion to the Virgin Mary, but when found in cemeteries, also symbolizes the unending and constant prayers for the deceased.

The marker is simple but elegant.  The portrayal of Christ is dramatic depicting Him wearing a Crown of Thorns that He wore as He was mocked as a king, which is described in John, Chapter 19, (King James Version):

Verse 2, “And the soldiers platted a crown of thorns, and put it on his head, and they put on him a purple robe.”

Verse 3, “And said, Hail, King of the Jews! and they smote him with their hands.” 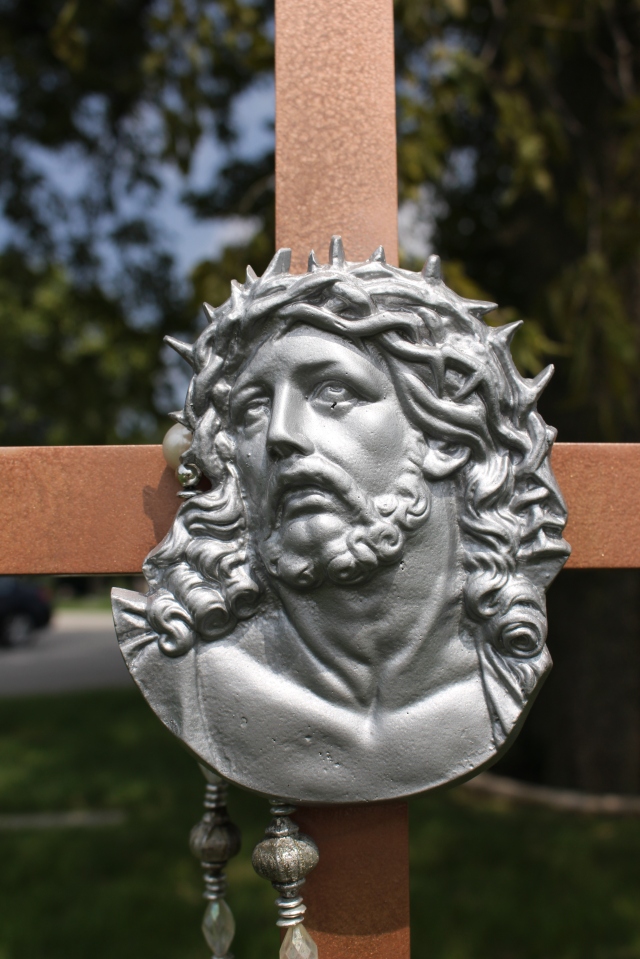 The agony of His face as He looks upward is a moving tribute to the pain He endured before the Crucifixion.