Posted on November 12, 2016 by gravelyspeaking

Adam Edward Burkhardt, emigrated from Bavaria to Cincinnati, Ohio, where he founded a company that manufactured furs. Burkhardt was a highly successful furrier and a prominent citizen of Cincinnati. His wife, Emma, was also from a leading family of the city. She was the daughter of Andrew Erkenbrecher, the founder of the Cincinnati Zoo.

According to Beauty in the Grove: Spring Grove Cemetery and Arboretum by Phil Nuxhall, 2009, Orange Frazer Press, page 44, the bronze statue marking the graves of the Burkhardt family, is referred to as the “Angel of Death.” The shrouded figure is kneeling, holding a wreath in one hand and palm leaves in the other. The palm represents victory over death as does the laurel wreath. The laurel wreath dates back to Roman times when soldiers wore them as triumphal signs of glory.

Who is the sculptor?

I contacted Phil Nuxhall, through the Spring Grove Website, who wrote Beauty in the Grove: Spring Grove Cemetery and Arboretum, and he told me that the artist’s name that is carved into the statue is Clement Barnhorn, (January 8, 1957 – August 2, 1935), a noted Cincinnati artist well known during his lifetime for funerary works, statuary, and architectural sculpture. 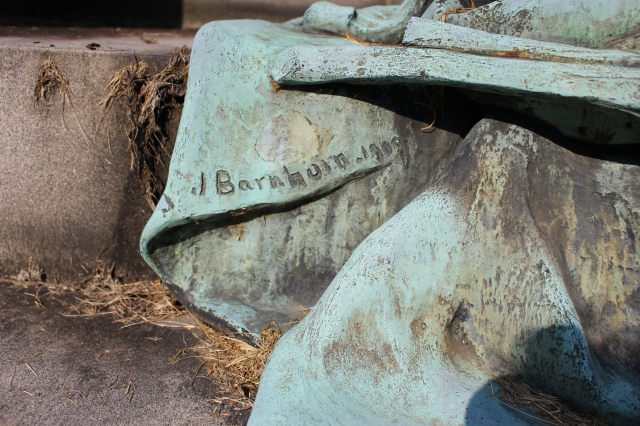