The Temple of Athena

Posted on November 5, 2016 by gravelyspeaking

Many ancient classical designs are replicated in American graveyards, often in grand neoclassical mausoleums based on the designs of Greek and Roman temples.  The Greek temple, the Parthenon, is one such example that has been replicated. The temple atop the Acropolis in Athens, Greece, was built between 447 and 438 BC and dedicated to the patron goddess of the city—Athena. The Parthenon was named for the cult of Athena Parthenon—“Athena the Virgin”. The temple was directed by Pericles and built by the architects Ictinus and Callicrates.   The sculptor Phidias supervised the construction and also completed the gold and ivory statue that was the centerpiece of the interior.

The Parthenon is an example of architecture in the Doric order, which is characterized by the fluted columns with no base resting directly on the stylobate, slightly curved and unadorned capital.  The architrave (stone panel that traces around the building just above the column) is truncated and plain, as is the frieze which is generally enhanced with triglyphs and bas-reliefs.

Two mausoleums, one in the Spring Grove Cemetery at Cincinnati, Ohio, and one in the Lakewood Cemetery at Minneapolis replicate the Doric-style design of the Parthenon. 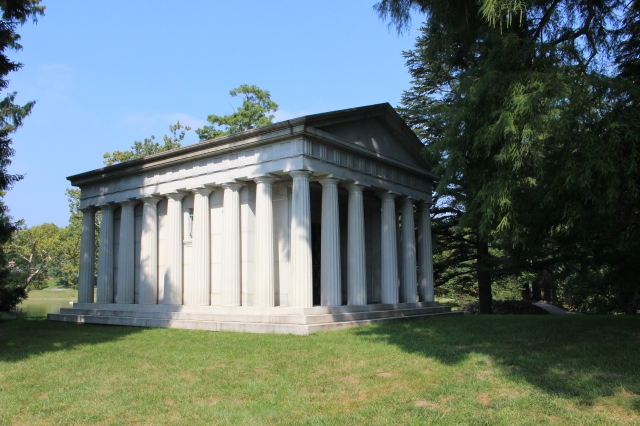 The Spring Grove Cemetery’s replica of the Parthenon was built by Charles Louis Fleischmann a yeast manufacturer. The Fleischmann Yeast Company became the world’s leading yeast producer. The company also produced vinegar and margarine. The mausoleum was constructed of 5,000 square feet of granite and designed by noted architects Samuel Hannaford and James K. Wilson.

Lakewood Cemetery’s largest mausoleum was built for the Goodrich and the Lowry families. Dr. Calvin Gibson Goodrich, Sr. and his son, Dr. Calvin Goodrich, Jr., were both prominent doctors. Thomas Lowry was a prominent businessman who headed the Minneapolis Street Railway Company. Goodrich and Lowry co-founded the Lakewood Cemetery and were also connected by the marriage of Beatrice Goodrich to Thomas Lowry.