Posted on September 28, 2016 by gravelyspeaking 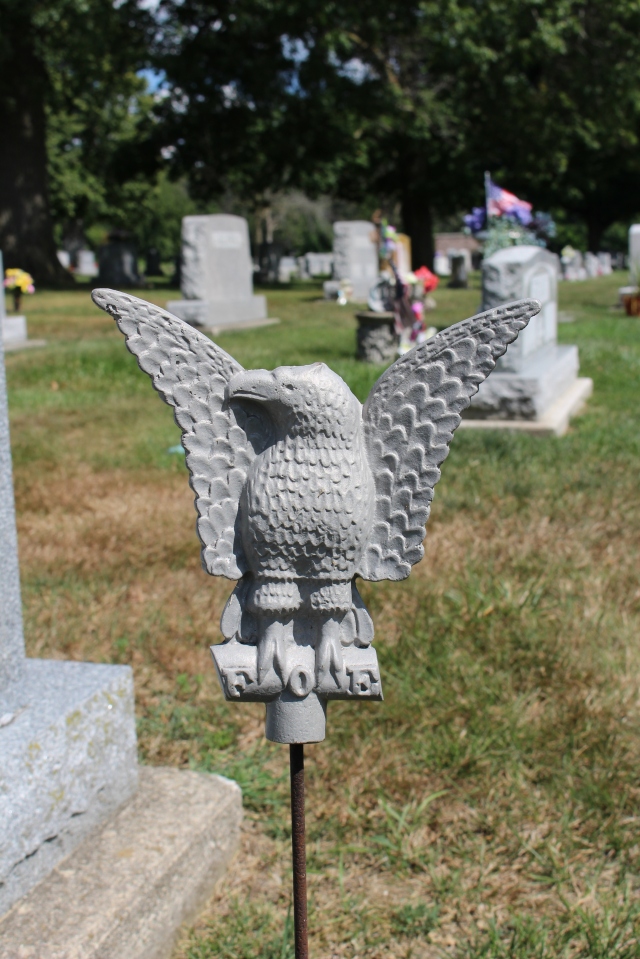 Founded February 6, 1898, by six Seattle, Washington, theater owners John Cort, John W. and Tim J. Considine, Arthur Williams, Mose Goldsmith, and Harry Leavitt organized as “The Order of Good Things”.  Within two months, in April of the same year, the fraternal order changed its name to The Fraternal Order of Eagles and adopted the American bald eagle as their emblem.

Many of the members’ graves are commemorated with a metal marker placed next to their gravestones. The Fraternal Order of Eagles metal grave markers come in many shapes and forms, often with the eagle inside a circle on a staff. This cast aluminum eagle marker in the Memorial Park Cemetery at Kokomo, Indiana, is a bit unusual because of its high-relief, almost 3-dimensional design. In this example, the eagle wraps its talons around perch with the letters F O E. The eagle’s wings are spread tipped upward, with its head turned.

The Eagles organize local chapters into aeries, (the chapter number is on the center of the marker–859) so named for the nests of eagles which are usually high and difficult to access.  Nearly since their inception, the Eagles have lobbied for causes important to the organization, such as the creation of Mother’s Day in 1904, later in the 30s for Social Security, and in 2006 to keep the two words “under God” in the Pledge of Allegiance.  The Eagles also contribute to many charities, such as, St. Jude’s Hospital, a Disaster Relief Fund, Diabetes Research Center at the University of Iowa, Art Ehrmann Cancer Fund, D. D. Dunlap Kidney Fund, among others.