Posted on August 28, 2016 by gravelyspeaking

America’s first vice president, John Adams said this about the job, “My country has in its wisdom contrived for me the most insignificant office that ever the invention of man contrived or his imagination conceived.” Not exactly high praise. The reputation for the office was not off to an auspicious start, to say the least. And, it didn’t get much better over the course of time. John Nance Garner, vice president under Franklin Delano Roosevelt, described the position this way, “The vice presidency isn’t worth a warm pitcher of spit.”

However, no matter how the office has been described various candidates have lined up to take the job—47, in fact, have served as vice president. As Bill Vaughan was quoted, “The vice presidency is sort of like the last cookie on the plate. Everybody insists he won’t take it but somebody always does.”

This year two men have signed up for the bottom of the ticket—Tim Kaine of Virginia and Mike Pence of Indiana. And, with the exception of New York which boasts 11, more vice presidents have been from Indiana than any other state. Five have hailed from the Hoosier state—Schuyler Colfax, Thomas Hendricks, Charles Fairbanks, Thomas Marshall, and Dan Quayle. 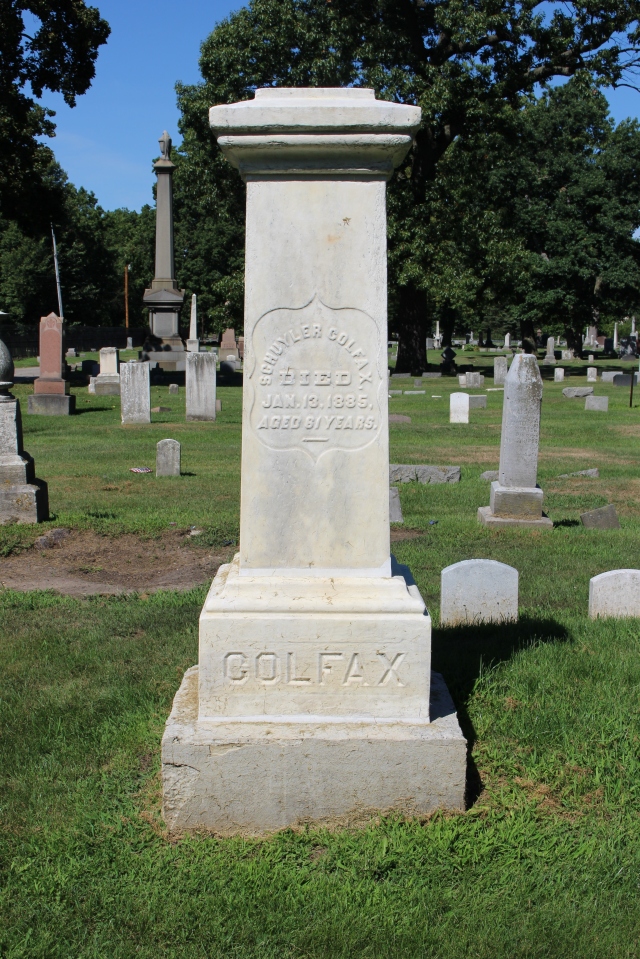 Schuler Colfax is buried in the City Cemetery at South Bend, Indiana under a tall white marble gravestone. At one time it had a small angel on top of the column but it is now missing. There is a small bronze marker with the following inscription:

VICE PRESIDENT OF THE UNITED STATES

HE RENDERED TO HIS COUNTY.

Hendricks has a soaring gray granite octagon-shaped column resting on a ornamented plinth in the Crown Hill Cemetery at Indianapolis, Indiana. The monument has the following inscription:

The Fairbanks monument in the Crown Hill Cemetery at Indianapolis, Indiana is designed in of the Ionic order, one of the three organizational systems of Greek architectural design.  The Ionic order is characterized by the use of a capital (the top of the column) that uses volutes, a spiral scroll-like ornamentation.  The Ionic columns are slender and fluted and the monument is topped with an acroterion motif–a stylized palm leaf that can be found on classical Roman and Greek architecture. His monument lists his and his wife’s accomplishments:

Marshall and his wife, Lois Irene Kimsey, 1873 – 1958, are both buried at the Cown Hill Cemetery at Indianapolis, Indiana, in a light gray limestone mausoleum.

Only 14 of the 47 men to serve as Vice President have become president, five by election. John Tyler was the first to ascend to the presidency upon the death of a president. He was derisively referred to as “His Accidency.” Seven other men became president under the same circumstances—Millard Fillmore, Andrew Johnson, Chester Arthur, Theodore Roosevelt, Calvin Coolidge, Harry Truman, and Lyndon Johnson. As Will Rogers said, “The person with the best job in the country is the vice president. All he has to do is get up every morning and say, ‘How is the president?’” Gerald Ford became president when Richard Nixon resigned the presidency.