Posted on August 6, 2016 by gravelyspeaking

Archangel Michael is the only named Archangel that appears in all three sacred texts of Judaism, Christianity, and Islam. Often referred to as St. Michael, Michael is actually an Archangel meaning that he is above all other angels in rank. In some of the many examples of the Archangel Michael found in the Mount Carmel Cemetery at Hillsdale, Illinois, whether in glass or stone, he is depicted as an angel wearing armor and wielding a sword. In each case Archangel Michael is triumphant over evil.

In the first example found in a stained glass window in a mausoleum in the Mount Carmel Cemetery, Archangel Michael is depicted with his arm raised as he readies Himself to plunge his sword into a fallen angel. Michael is bathed in light while the angel upon which he stands is depicted in a dark foreboding bilious green. This scene is an artistic recreation of the battle between Archangel Michael and Satan from the Book of Revelations (12:7-9):

8 And prevailed not; neither was their place found any more in heaven.

9 And the great dragon was cast out, that old serpent, called the Devil, and Satan, which deceiveth the whole world: he was cast out into the earth, and his angels were cast out with him.

According to the teachings of the Catholic Church, two of Archangel Michael’s responsibilities are to fight Satan, but also to escort the soul from this life to the next to stand in front of God in Heavenly judgment.

In the second stained glass window depiction of Archangel Michael, he is draped in the royal colors of purple—a prince of Heaven.

In the scene, Archangel Michael not only fights and defeats Satan, but he carries with him the scale of judgment.   Satan, again depicted in darkness and is thrown to the ground with his arms up to protect himself. Satan is falling from Heaven into flames.

In both stained glass examples above, Archangel Michael is shown toward the end of the battle—wielding the sword which has not yet defeated its enemy. The battle between good and evil still engaged but not yet won.

In the depictions in stone below, the battle is over. Archangel Michael is shown with his sword in Satan’s mouth.

And in all three cases, Satan is depicted as a dragon or a serpent, instead of a fallen angel. 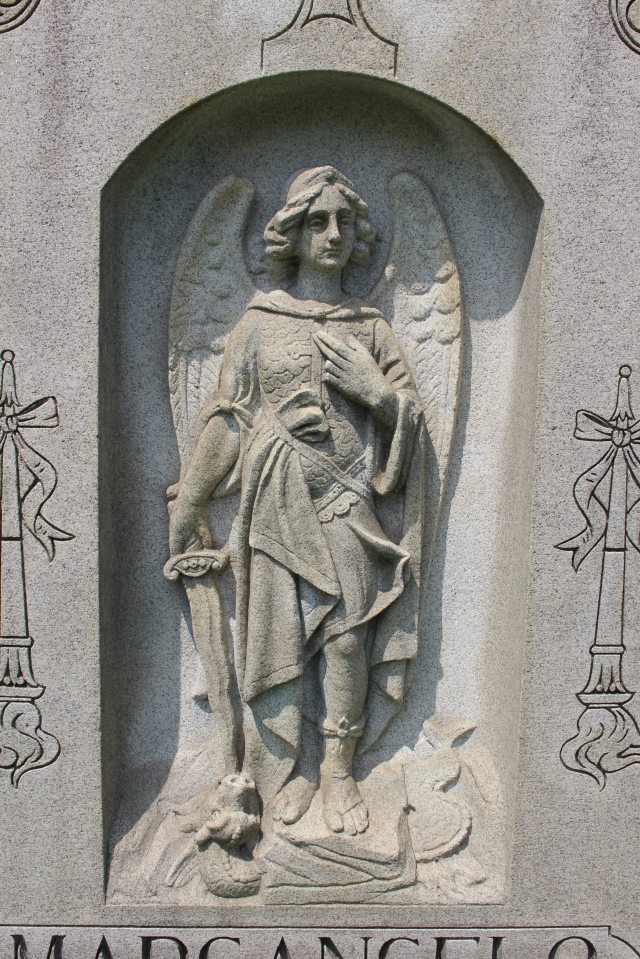 After the great battle, Satan is cast out of Heaven to Earth where he  attempts to deceive the whole world and to lead the righteous astray. The battle continues in the hearts of men and women. 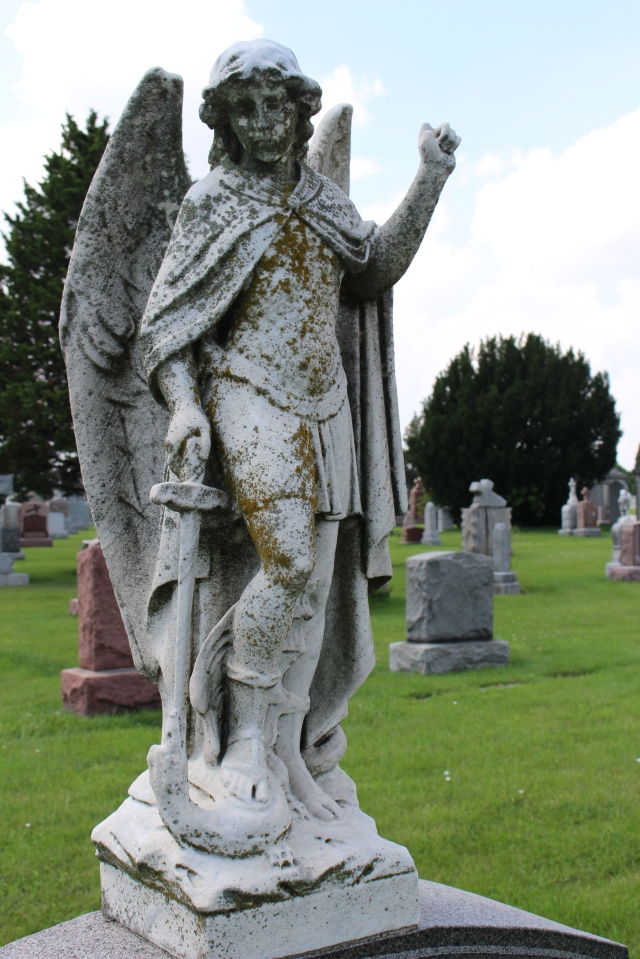