Posted on August 3, 2016 by gravelyspeaking

Michael Shea of Rochester, New York read the gravelyspeaking blogpost about Ivan Adams—the Bloomington stone carver who carved the simple and elegant depiction of the Virgin Mary to mark his own grave.

Mr. Shea has shared photos of a statue, carved by Adams, for the Holy Cross Rectory, which was blessed by Bishop James E. Kearney on May 22, 1951.

“The statue of Mary is 56 inches in height, including the base, and it rests on a 42-inch-tall pedestal, for an overall height of 8 feet 2 inches. Carved into its base is the name of its sculptor: Ivan L. Adams. Mr. Adams worked out of Monroe County, Indiana and created religious statues as well as carvings of a more secular nature. His portfolio includes carvings and columns for the Fine Arts Building in Chicago’s Grant Park in 1933 and the National Shrine of the Immaculate Conception in Washington, D.C., as well as the 21-foot tall statue of Our Lady of Lourdes which still sits atop the hospital of the same name in Camden, New Jersey.”

Many prepare for death by writing a will, saying goodbyes, buying cemetery plots, but few have the talent to go so far as to design and carve their own gravestone. But, that is exactly what Ivan Leon Adams did. He carved a spire-like figure of the Virgin Mary for his own gravestone. The simple but elegant limestone statue in the Rose Hill Cemetery at Bloomington, Indiana, marks his grave and his wife, Gladys’s grave. If you want something done right, you might as well do it yourself—which he did.

According to his obituary, which appeared on June 19, 1968, in the Daily Herald-Telephone, “Ivan L. Adams of 2921 South Rogers, one of Monroe County’s most famous stone carvers, died Tuesday at Bloomington Hospital.”

“Adams began his career in 1924 during an era when stone carving and the stone industry was at its height in Monroe County. Stone Carvers were the artisans of the industry then.”

“Ivan Adams worked on carvings and columns for the Fine Arts Building in Chicago’s Grant Park in 1933, the National Shrine of the Immaculate Conception in Washington, D.C., the 21 foot statue of Our Lady of Lourdes (hospital) at Indian Hill in Camden, N.J. and the Church of the Holy Redeemer.”

“He also worked on many of the landmarks around Bloomington and south central Indiana, such as Foster Quad at Indiana University.” 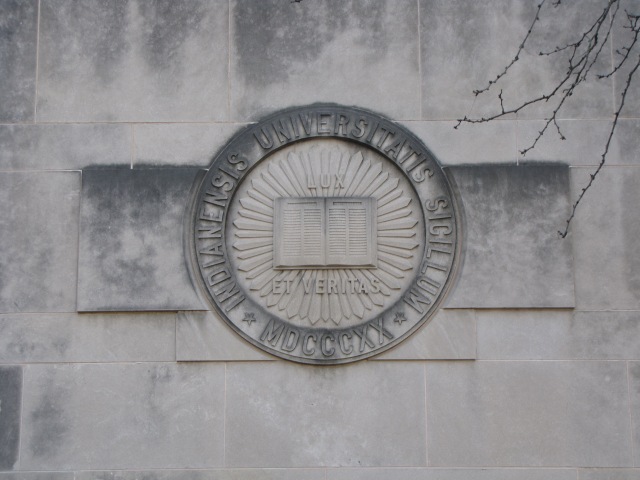 Carving above a doorway at Foster’s Quad at Indiana University

An article that appeared in the Hoosier Times, Sunday, November 21, 2004, quoted Ivan’s daughter, Norma, “One of my favorite sculptures designed and carved by my father alone is Bernadette (patterned after Jennifer Jones, the actress who played the star role in the movie “Song of Bernadette”). The statue is located in Tulsa, Oklahoma, as is his sculpture “St. Francis of Assisi.” A very charming small carving that he designed and carved on the chimney at the old OBR building, 3rd and Dunn in Bloomington, showing a boy and kissing a girl.”

In that same article, his daughter explains, that her father also worked on the sculpture of GI Joe that stands on the Monroe County Courthouse grounds. Norma explained that “it was not an unusual practice for a carver’s name not to appear on a carving.” 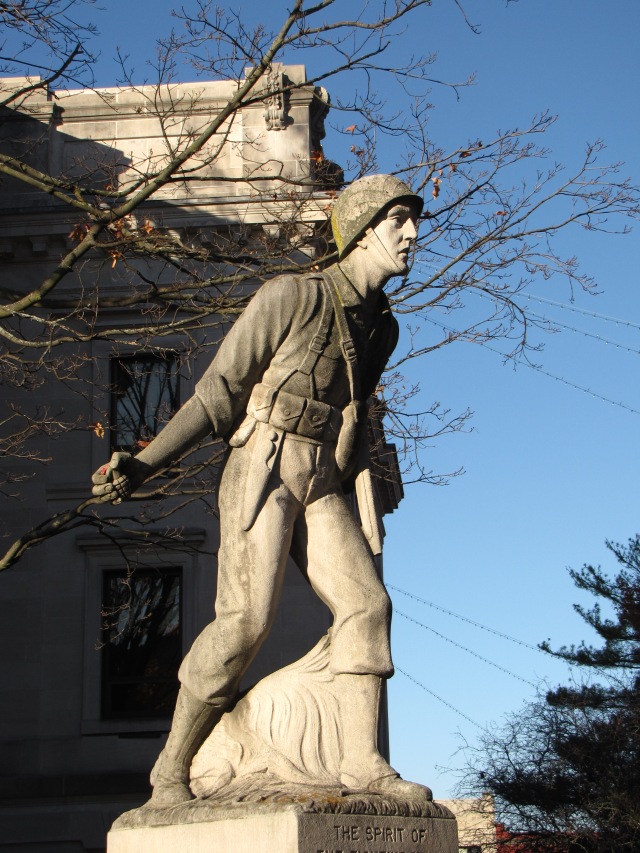 Adams’ legacy is much more than the statue that marks his grave. His work can be found in the many carvings he did, many of which are unmarked and unknown to passersby but add to the beauty of our everyday surroundings. Some of which we walk by without much notice.