Posted on January 3, 2016 by gravelyspeaking

Two monuments, one in the Rock Creek Cemetery at Washington D.C. and the other in Cave Hill Cemetery at Louisville, Kentucky, depict an opening or gateway with a rock rolled away from the opening.

The Hamilton Tomb has two Bible verses carved into the face of it that indicate that the opening of that monument is meant to portray Jesus’ entry into Heaven, “To-day shalt thou be with me in paradise.” Here Jesus leaves the Earthly realm to the Heavenly realm—this is the Resurrection of Christ. The second Bible verse, Revelation 21:21, goes on to describe the destination, “And the twelve gates were twelve pearls; every several gate was one pearl; and the street of the city was pure gold, as it were transparent glass”.

The second monument that of Zachariah Madison Sherley, a prominent riverboat fleet owner and pilot and his wife Susan Wallace Cromwell Sherley, depicts a rough-hewn rock next to an entryway also. This one, too, depicts the Resurrection of Jesus. Many places in the Bible describe the Holy event, as does John 20:1 – 2, “The first day of the week cometh Mary Magdalene early, when it was yet dark, unto the sepulcher, and seeth the stone taken away from the sepulcher. 2. Then she runneth and cometh Simon Peter, and to the other disciple, whom Jesus loved, and saith unto them. They have taken away the Lord out of the sepulcher, and we know not where they have laid him.” 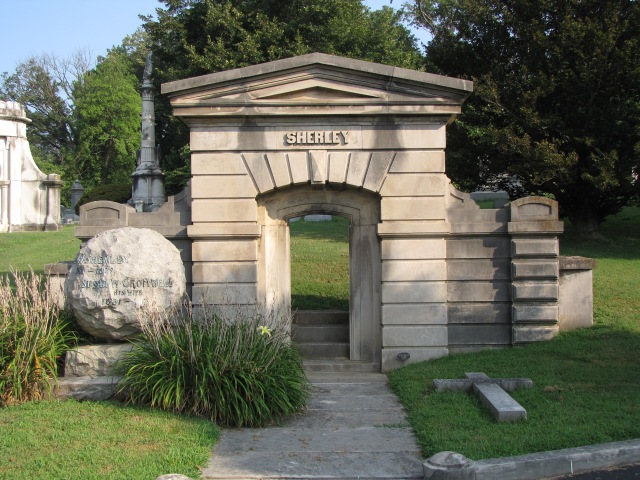