Woodmen of the World and the Tree-Stump Gravestone

Posted on November 28, 2011 by gravelyspeaking

Joseph Cullen Root, a prolific founder, founded four fraternal organizations during his lifetime, one of them being the Modern Woodmen of America (MWA).  MWA was founded on on January 5, 1883.  Root was inspired by a Sunday sermon in Lyons, Iowa. During the sermon the pastor extolled the virtues that came from “woodmen” cutting down the forest to build homes and communities. It was then that Root adopted the term Woodmen for his newly formed organization. The tools to clear those forests were adopted as symbols for the organization at the same time– axe, beetle (mallet) and wedge – symbolizing industry, power and progress.
After Root had a falling out with the Woodmen of America, he founded the Woodmen of the World organization on June 6, 1890, at Omaha, Nebraska. He had been a member of several organizations, including the Odd Fellows, but Root wanted this new organization to be beneficial.  He wanted to make sure that after the death of the breadwinner that the family would be protected through a death benefit payout.
In addition to the life insurance benefits, an early program that lasted until the late 1920s, was to provide a marker for each member upon their death. The influence of that early sermon can be seen in many of the tree-stump tombstones, fitting designs for the Woodmen of the World members, with its imagery the axe, beetle, and wedge.

The tree-stump tombstone is also a physical depiction of the cleared forest.  There are many varieties of what these gravestones look like. 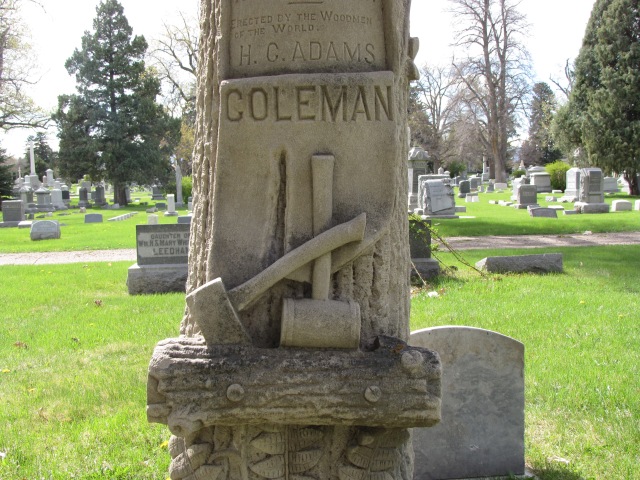