Posted on December 7, 2014 by gravelyspeaking 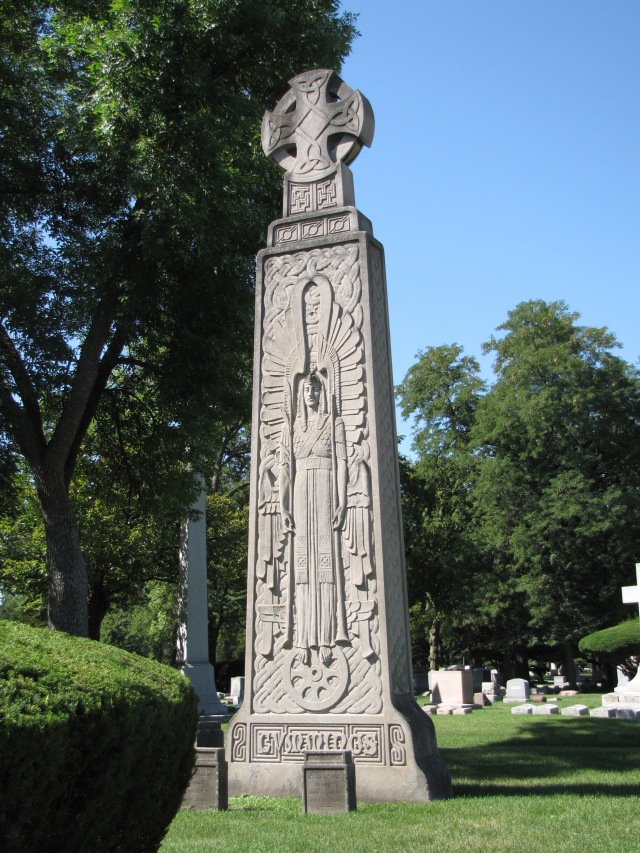 Started as a stationery and fancy goods store in New York City in 1837, Tiffany’s became known for creating high-end silverware, glassware, and, of course, jewelry. It became the premier purveyor of that special gift that comes in a light blue box often given on bended knee.

But Tiffany’s also created funerary monuments. One example of their work can be found in the Forest Home Cemetery at Forest Park, Illinois. The commission was created for Edmund and Ellen Cummings. Edmund Cummings served in the Civil War, serving under General Ulysses Grant and General William Tecumseh Sherman. After the war Cummings moved to Chicago where he founded a highly successful real estate company. In 1889, he and his brother founded an electric streetcar line, the Cicero & Proviso Street Railway Company.

The bas-relief angel carved into the soaring Celtic cross marks the graves of Edmund Cummings and his wife, Ellen. The monument is a testament to Edmund’s success as a Chicago businessman. This Art Deco design with the angel standing on a wheel may be a reference to Ezekiel’s vision described in the Bible:

And when I looked, there were four wheels by the cherubim, one wheel by one cherub and another wheel by each other cherub . . . (Ezekiel 10:9)

1 Response to Tiffany and Company