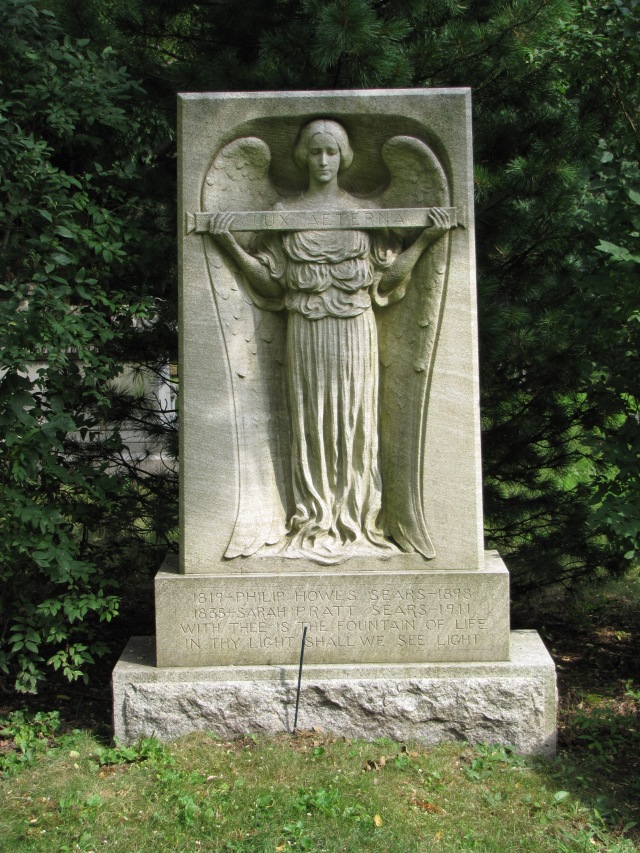 WITH THEE IS THE FOUNTAIN OF LIFE

IN THY LIGHT SHALL WE SEE LIGHT

When we see a winged figure in a cemetery, we instantly recognize it as an angel–a messenger of God.  However, Christian art did not depict angels with wings until the fourth century.  Before then, angels were represented in several different forms–sometimes in human form, but also represented as a dove, or even just as a hand reaching down to Earth from the Heavens.  Beginning with the reign of Constantine, angels began being depicted with wings, as this angel is portrayed here on the Sears monument in the Mount Auburn Cemetery at Cambridge, Massachusetts.

This angel, dressed in billowing gossamer that forms cloud-like folds on her bodice, holds a ribbon with the words, “LUX AETERNA”, Latin for “Light Eternal.” This is most likely a reference to the Biblical verse John 8:12, “Then spake Jesus again unto them, saying, I am the light of the world: he that followeth me shall not walk in darkness, but shall have the light of life.”  The reference is continued in the second line of the epitaph, “IN THY LIGHT SHALL WE SEE LIGHT“.