Tree-stump and the railroad lantern

Posted on July 8, 2012 by gravelyspeaking 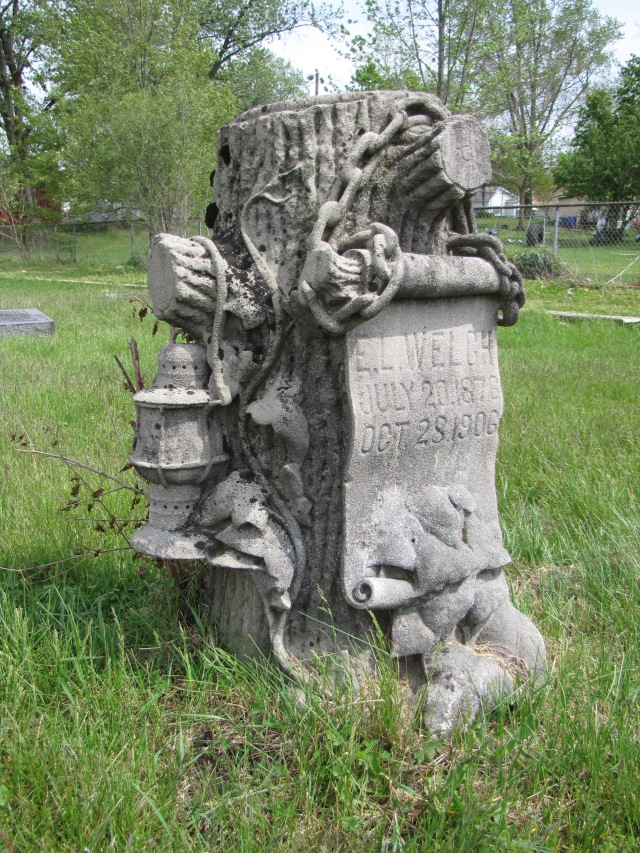 Tree stump tombstones, generally carved from limestone, were a part of the rustic movement of the mid-nineteenth century which was characterized by designs that were made to look like they were from the country. The gravestones are purposefully designed to look like trees that had been cut and left in the cemetery which was part of the movement to build cemeteries to look like parks.  In funerary art, the tree-stump tombstones were varied—the stonecutters displayed a wide variety of carving that often reflected individual tastes and interests of the persons memorialized.

The tree-stump gravestones themselves were imbued with symbolism. The short tree stump usually marks the grave of a person who died young—a life that had been “cut” short.  In this example, E.L. Welch is just 30 years.  His scroll, which can symbolize the Law or the Word of God, displays his name and birth and death dates, is chained to the tree stump. Twining up the face of the gravestone is ivy, a symbol associated with immortality and fidelity.  Hanging from a cut branch on the tree stump is a railroad lantern, which may indicate where he worked.

1 Response to Tree-stump and the railroad lantern