Posted on November 25, 2019 by gravelyspeaking 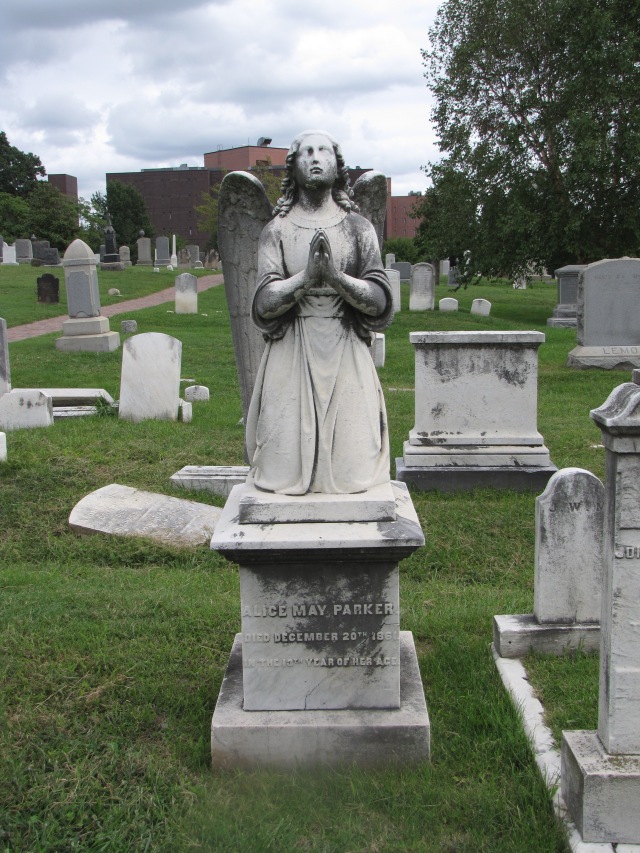 A friend of mine recently shared with me that her first husband passed away when she was 23.  Her husband was 24 and their daughter was only a year old.  It was a very tough for her emotionally, financially, and she felt alone.  She’d just lost her husband and now had to go on to raise their daughter by herself.  And, she had to attend to the funeral arrangements even as she dealt with waves of grief.

She told me that she took a long time to decide on the headstone.  While she was at the monument company, she also overheard a man picking out a headstone for his wife of 60 years.  Both experiences, like all experiences when someone is picking out a gravestone for a loved one, is deeply personal and fraught with emotion.  It is, after all, one of the last things you can do for your loved one.  Not only that, but it will be a reminder not only to you but to all who gaze upon the gravestone and think about the person buried beneath it.

So, when I saw the kneeling angel that marks the grave of 13-year old Alice May Parker, I can’t help but think of the anguish her parents had when their daughter passed away.  She died of typhoid fever and must have suffered with the fever for a few days before she died.  I am sure they were by her bedside attending to her and hoping for the best results.  Then the end came.  The grief of a parent for a child is overwhelming.

When looking at gravestones, there is always room for interpretation.  Elisabeth L. Roark wrote an article about angels titled, “Embodying Immortality: Angels in America’s Rural Garden Cemeteries, 1850—1900”, pages 56 – 111, 2007 edition of Markers, XXIV, in which she categorized the eight most commonly found types of graveyard angels—grouped by the task they performed: soul-bearing; praying; decorating and guarding; pointing; recording; trumpeting; sword-bearing (archangel Michael); and child angels.

The winged protectors served to watch over the “soul while living, removed occasions of sin and provided protection when danger threatened, interceded on their charges’ behalf, attended at death, eased the transition to the next world, conducted the soul to Heaven, and looked after the grave site and the deceased’s remains until resurrection.”

These were busy angels. In addition to those duties, the praying angels served as an intercessor conveying messages from their charges to Heaven. These angels usually are looking upward toward the Heavens, hands clasped together in prayer, sometimes coupled with emblems of faith, such as, anchors and crosses, often clad in toga-like clothing.

But when I look at Alice May Parker’s monument in the Congressional Cemetery in Washington, D.C., I wonder if her parents, George and Sofia Parker, saw their little girl in that angel, to me the angel looks to be about the same age as Alice May when she died.   I wonder if her parents made the choice to mark her grave with an angel, not as a messenger from God, but as a memorial to their little angel.

This entry was posted in Angels, Children's Graves. Bookmark the permalink.

2 Responses to Their Little Angel