Posted on October 9, 2019 by gravelyspeaking 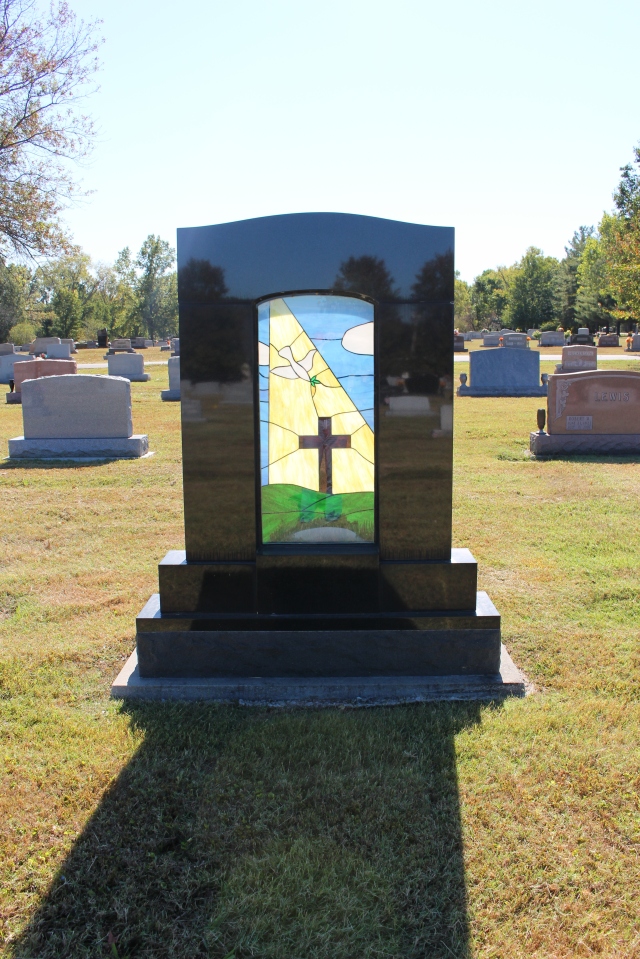 Generally, I write about older gravestones from the 17th, 18th, and 19th centuries.  I usually find them to be more interesting with symbolism that is intriguing and sometimes forgotten or obscure.  Or I write about statuary found in graveyards that are works of art often by well-known artists who did commission work including funerary sculptures.

But as I was walking through the Kraft-Graceland Memorial Park in New Albany, Indiana, I was struck by a highly polished black granite gravestone with a stained-glass window inset.  The window depicts a ray of sunlight shining down on the Cross.  The gravestone was designed, I think, to look like a free-standing church window and is a stellar example of a modern design of mixed construction materials.

Within the ray is a dove with a sprig of three leaves in its beak—the number three likely representing the Holy Trinity.  Many symbols found on gravestones have multiple meanings. The dove is one of those.

Several references in the Bible refer to the dove as a symbol of the Holy Spirit. Matthew 3:16 reads, “And Jesus, when he was baptized, went up straightway out of the water: and, lo, the heavens were opened unto him, and he saw the Spirit of God descending like a dove, and lighting upon him.” In Mark 1:10 the Bible says, “And Straightway coming up out of the water, he saw the heavens opened, and the Spirit like a dove descending upon him.”

Again, in John 1:32, the Bible reads, “And John bare record, saying, I saw the Spirit descending from heaven like a dove, and it abode upon him.”

Along with the dove symbolizing the Holy Spirit, the dove is also closely associated with peace, often depicted with a sprig of an olive in its beak. This, too, originated in the Bible. After the waters receded in the story of Noah, the dove appears. Genesis 8:11, “And the dove came into him in the evening; and, lo, in her mouth was an olive leaf pluckt off; so, Noah knew that the waters were abated from off the earth.”   It was a sign of God’s forgiveness.

Thus, the dove symbolizes the Holy Spirit, peace, and purity.