Posted on August 18, 2019 by gravelyspeaking 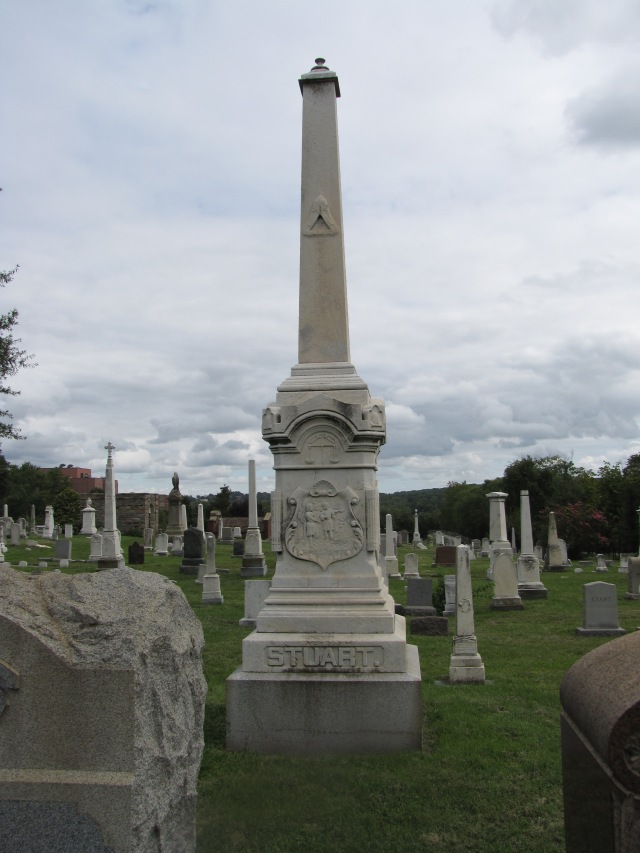 The cartouche on the face of the plinth is badly worn and eroded but is discernible: 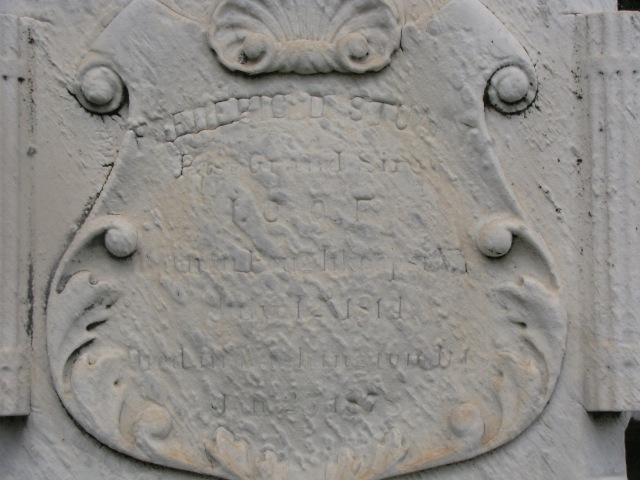 The soaring soft, white-marble obelisk in the Congressional Cemetery in Washington, D.C., is a tribute to Frederick Stuart, who was the Post Grand Sire of the Independent Order of Odd Fellows.  The Independent Order of Odd Fellows is a fraternal organization that formed in England in the 1700s as a service organization. The American association was founded in Baltimore, Maryland, on April 26, 1819. According to the I.O.O.F. Website, “Thomas Wildey and four members of the Order from England instituted Washington Lodge No. 1. This lodge received its charter from Manchester Unity of Odd Fellows in England.”

On the cartouche on the opposite side from his name, is the dedication from his compatriot Odd Fellow members who erected the gravestone in his honor: 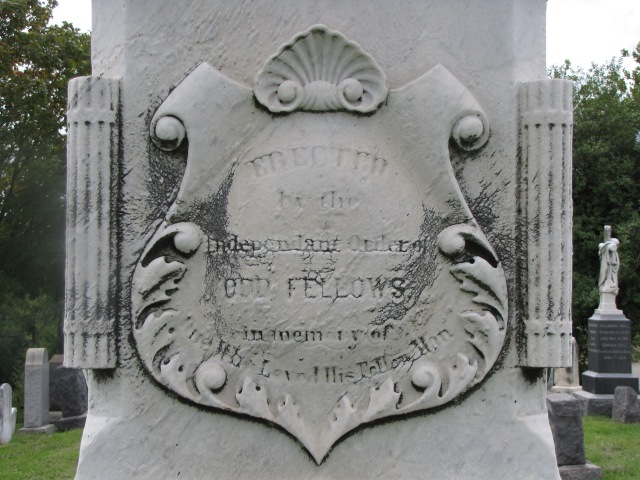 By the Independent Order of

He Who Loved His Fellow Man

The gravestone is imbued with much Odd Fellow’s symbolism.  Midway on the obelisk is the tent with two crossed crooks. 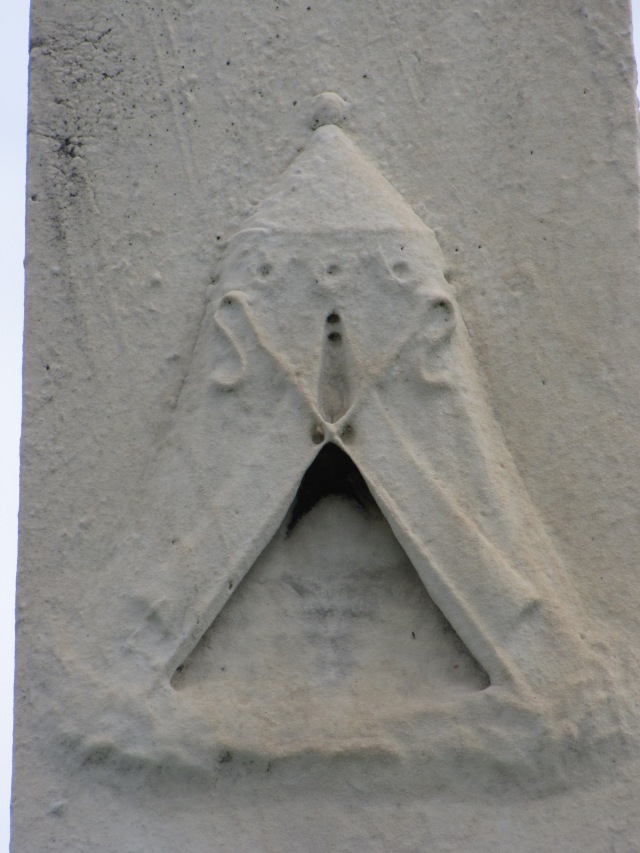 According to the Half Moon Bay Odd Fellows Ocean View Lodge website, the tent and crossed crooks represent, “A higher order of the IOOF called the Encampment uses the symbols of crossed shepherd’s hooks and/or ancient Middle Eastern-looking tents. The Encampment branch of the IOOF strives to impart the principles of Faith, Hope and Charity. The crossed shepherd’s hooks symbolize that the higher order of the IOOF are like the Israelites – shepherds, watching their flocks and keeping them safe. And the tents are the tents of the wandering Israelites, to remind us we “do not permanently abide here, as we are on a pilgrimage to the grave.”” 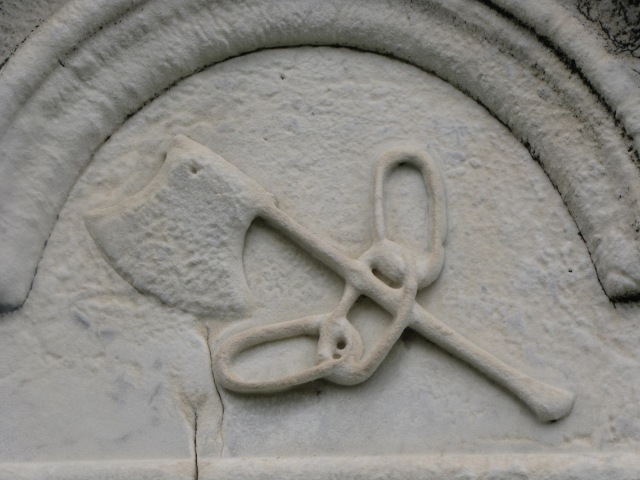 The main symbol of the IOOF is the three chain links, sometimes with the letters F, L and T inside them, which stand for Friendship, Love, and Truth.  When the three chain links are joined with an axe, the symbol means that truth must be persevered and the parts of us that “do not bear good fruit” must be cut down, as an axe fells sickly trees. 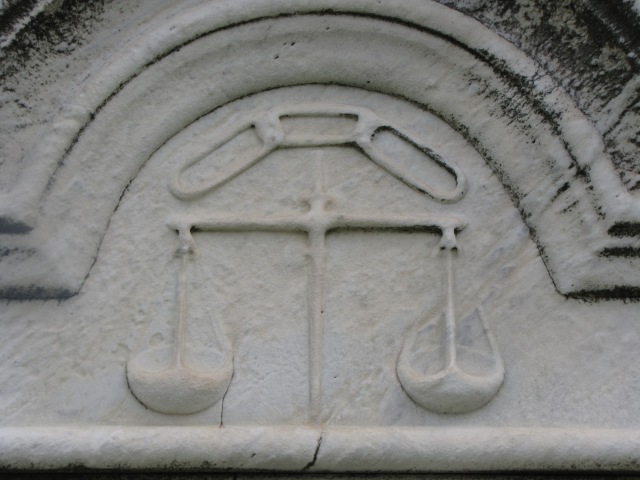 The Sword and Scales

Here is the symbol of the sword and the scales—the sword is the vertical rod holding the scales.  According to Stacy C. Hollander, “Independent Order of Odd Fellows Sword with Scales,” exhibition label for Mystery and Benevolence: Masonic and Odd Fellows Folk Art from the Kendra and Allan Daniel Collection. Stacy C. Hollander, curator. New York: American Folk Art Museum, 2016, the symbol of the sword and scales, like many of the symbols adopted in America’s early national period, derives from classical sources and came to be closely identified with the judicial system. It is used in the rituals of the Odd Fellows to signify justice.

In addition to the plethora of Odd Fellows symbols described above there are also two tableaus that are badly eroded and difficult to decipher: 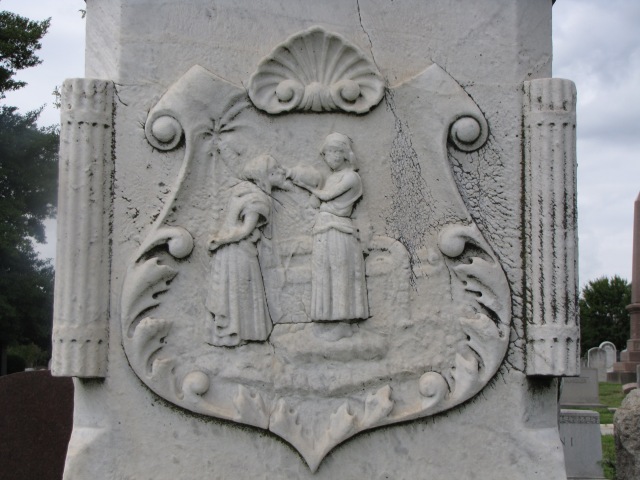 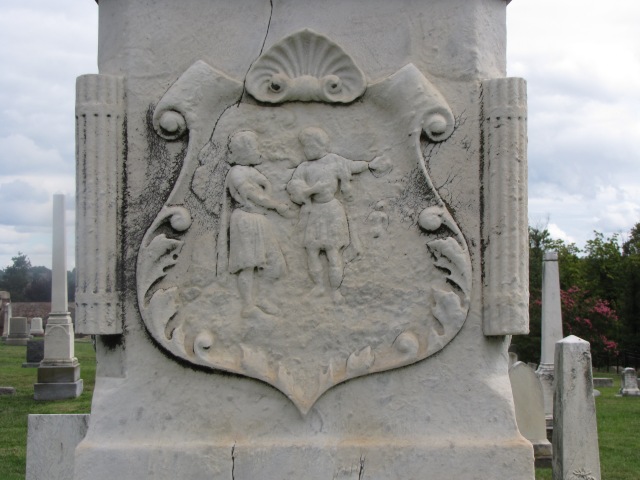