Posted on August 7, 2019 by gravelyspeaking 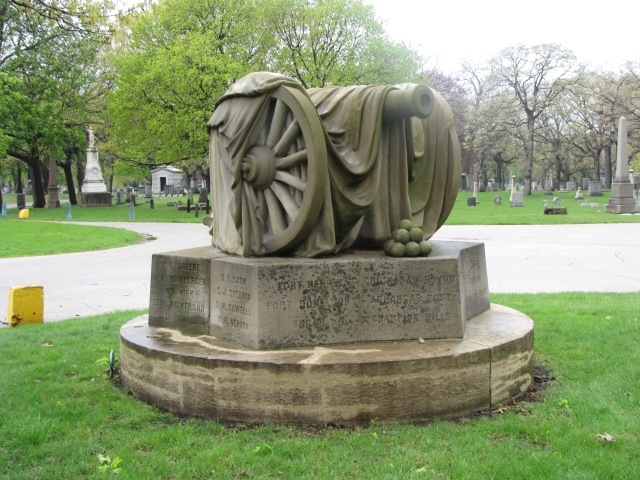 Near the entrance of the Rosehill Cemetery in the Northside of Chicago is a monument dedicated to Battery A of the Chicago Light Artillery unit.  According to a newspaper account from the time of the dedication, the monument was designed by artist Leonard Volk to commemorate the “first soldiers who left Chicago to take part in the War of the Rebellion.  The company was formed by Capt. James Smith, and left for the front on the 21st of April 1861.  In the will of the late Capt. Smith, a bequest of $2,000 was made for the purpose of erecting the monument.”

The monument of a flag-draped cannon is carved out of sandstone.  The monument lists the names of the battles in which the unit fought and lists the names of the soldiers who lost their lives in those battles.  Here the cannon is at rest, draped in the national symbol of the American flag.  The country was at peace afterwards.  Like the other cannons in cemeteries throughout the country, the cannon is a symbol of military service, of patriotism, and of sacrifice.  Like so many other symbols, however, found in the cemetery, the cannon, depending on positioning can take on other meanings. 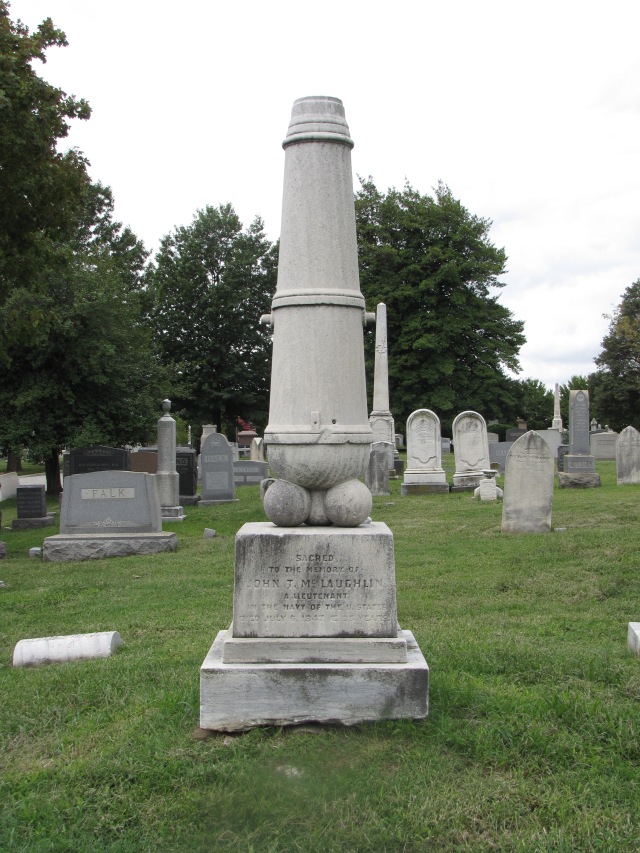 TO THE MEMORY OF

IN THE NAVY OF THE U. STATES

The John McLaughlin monument in the Congressional Cemetery in Washington, D.C. is in the shape of an upright cannon resting on a base of cannon balls.  The upright cannon symbolizes that the region is now at peace.

On the gravestone of Major Robert Low Bacon (July 23, 1884 – September 12, 1938) in Arlington National Cemetery are two crossed cannons displayed in the tympanum of the rounded-top light gray granite tombstone.  As one might expect when they happen upon a gravestone that has crossed cannons carved into the stone, it is most likely an indication of a soldier who served in an artillery unit.  In fact, Bacon served in an Army artillery unit in World War I.

Here at the Laurel Hill Cemetery in Philadelphia, Pennsylvania, is the gravestone of Lieutenant Colonel Lippien who was killed at the Battle of Chancellorsville.  He, like the cannon carved atop of his monument, was laid to rest.  The symbolism of the cannon is clear, the cannon was stilled as was the brave soldier.

HELPED TO DEFEND THE FLAG OF THE UNITED STATES IN THE FOLLOWING BATTLES:

In the Rosehill Cemetery in Bloomington, Indiana, is the commanding marker of Robert Strong, a veteran of the Civil War.  Topping off his monument is a real disabled cannon.