Posted on July 4, 2019 by gravelyspeaking

Anna Bliss was a generous benefactor to many charities including the Metropolitan Museum of Art and Museum of Natural History in New York and the Cottage Hospital in Santa Barbara, California.  Mrs. Bliss was also a supporter of the suffragette movement and donated over a half a million dollars to the League of Political Education.

When her niece, Cora Barnes, fell to her death, Anna Bliss held a secret competition to create a memorial in the Woodlawn Cemetery in the Bronx to commemorate her life.  The competition was unusual.  Most patrons or their estates chose the sculptors themselves.  Each of the six artists were given photographs of the lot on which the memorial would stand.  Robert Aitken’s design was chosen. 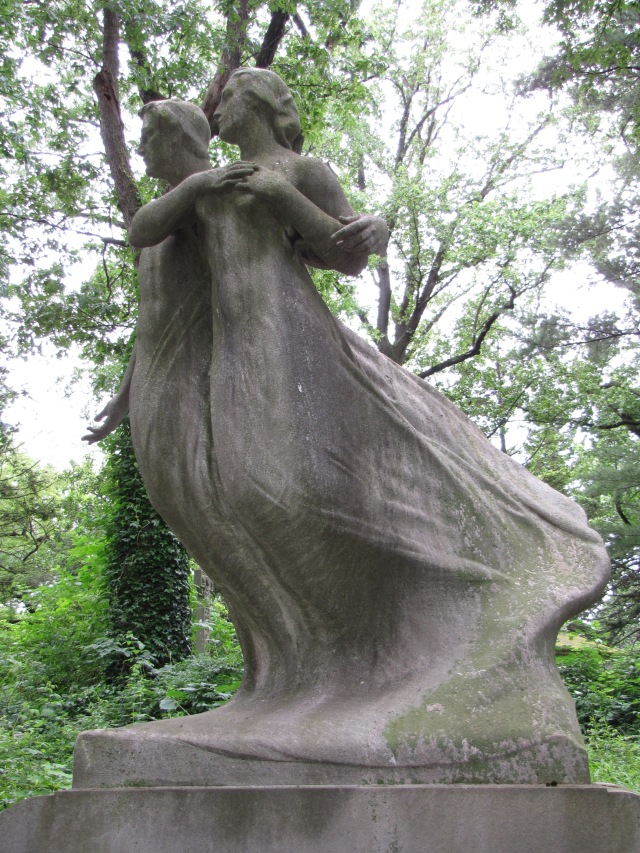 The book, Sylvan Cemetery: Architecture, Art, & Landscape at Woodlawn, described the memorial as “The two figures … of heroic size … symbolical of the soul leaving the body, the … figures are of Faith and Hope.  The spirit-forms of a man and a woman, carved by the Piccirilli Brothers from Aitken’s model, stand atop a low curving bench, with spiral forms at each end, suggestive of flowing water.  Chiseled on the bench is the quotation, “Our soul has sight of that immortal sea which brought us hither.” Which comes from William Wordsworth’s ode, Imitation of Immortality from Recollections of Early Childhood. In the poem, the lines suggest that our soul can reconnect with the formless, timeless realm from which we arrived as infants, when we were closer to the celestial before engaging the material world.”

The cinerarium in the back of the monument holds the ashes of Cora Barnes and Mrs. Bliss.