The Beginning of the Romantic Era

Posted on June 5, 2019 by gravelyspeaking 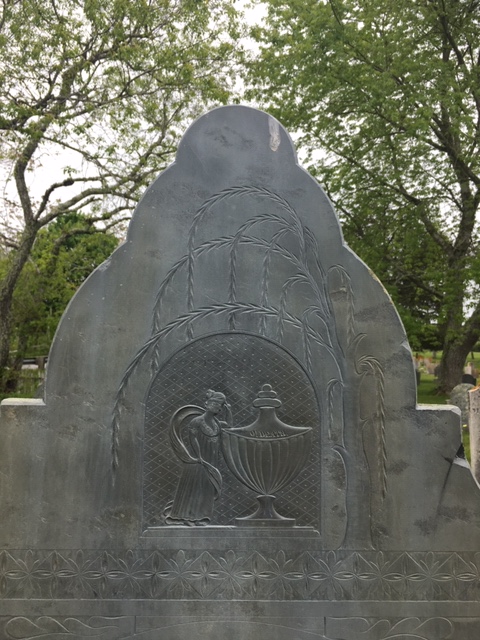 to the memory of

My friend and colleague, Tom, vacations on Martha’s Vineyard and during one of his walks he took a tour through a neighborhood cemetery on the island.  He knows my passion for gravestones and shares an interest, too, though far less obsessively.  He snapped a couple of pictures and sent them to me.

The ornamented gray slate gravestone here has a rounded-top inset that has a weeping willow bending over the scene of a woman leaning on a giant urn with the words “O! DEATH” inscribed on the neck.  The woman is dressed in an empire-style dress, which was high couture at the time and looks like a character straight out of Jane Austen’s Pride and Prejudice.  The woman could have been carved to represent Mrs. Polly Mantor symbolizes a mourning figure.

This gravestone demonstrates a softening of Puritan views about death that emerged during the Great Awakening and the beginning of the Romantic Era.  According to James Deetz and Edwin S. Dethlefsen, in their groundbreaking article, “Death’s Head, Cherub, Urn and Willow” the willow first made its appearance in cemeteries in the early 18th century.  The motif represented a break from the stark and cold reminders that death would bring that the Puritans carved into their gravestones—flying death’s heads, skulls and crossbones, and gravedigger’s equipment. In addition to the grim reminders of the inevitability of death Puritan gravestones often accompanied the haunting imagery with blunt words such as, “Here lies the body.” Nothing subtle there. The willow and the urn, however, represented a more sentimental view of death.

Often the willow and urn motif is accompanied with words like, “In memory of” or, as is the case with this gravestone, “Sacred to the memory of.” This change in language represented a softer approach.

Like many symbols found in the cemetery, they can have multiple meanings, or there can be disagreement about the meaning of the motif—the willow and urn is no exception. Christians saw the ability of the tree to live seemingly no matter how many of the branches were cut from the tree as a symbol of immortality. Others, however, suggest that the willow and urn predate Christianity to Roman times. The urn was used by Romans to store cremated remains and the willow was associated with the Persephone, the goddess of the underworld. Combined they represent the soul’s journey from the Earthly Realm to the Heavenly Realm. This design coincided with a neo-classical revival that took place mid-18th Century in America.