A Son’s Monumental Tribute to His Father

Posted on December 16, 2018 by gravelyspeaking

AT THE TAKING OF BURGOYNE.

TO THE MEMORY OF

IS GRATEFULLY AND AFFECTIONATELY ERECTED

BY THE ONLY SURVIVING SON

In 1856, Mark Hardin, the last surviving son of Colonel John Hardin, had erected a soaring monument in memory of his father in the Grove Hill Cemetery in Shelbyville, Kentucky.

An article in The Louisville Daily Courier, Jefferson County, Kentucky, Thursday, November 20, 1856, described the marble tribute made by Edgar Needham, a Louisville, Kentucky, stonecutter, as being 20 feet high and “a Doric pedestal with its capitol surmounted with a blocking course, on which is raised in Alto Relievo, four original and characteristic emblems representing the Pioneer, the Soldier, the Patriot, and the Christian.  Upon the blocking course is a column with a capitol of palm leaves, upon which is perched the glorious American eagle.”

The four-sided column has an “alto relieveo” or sculpture in high relief on each side, each highlighting a different facet of Colonel John Hardin’s noted life—pioneer, solider, patriot, and Christian.  The article described one of the bas-relief sculptures representing the PIONEER by writing, “This is unquestionably one of the finest private monuments ever built in Kentucky, and the representation of the “old Kentucky Rifle” with its old fashioned flint lock has been universally admired by all who have seen the work.”

John Hardin was born October 1, 1755 in Prince William County, Virginia.  Hardin served in the Revolutionary War.  Hardin was well known as an expert marksman.  He was mustered into Captain Zack Morgan’s Company which was fighting marauding and hostile Indians.  Hardin was badly wounded in what was known as Lord Dunmore’s War.  He carried a musket ball in his groin for the rest of his life from those battles.  His service in the Revolutionary War is noted by the word PATRIOT on the monument. 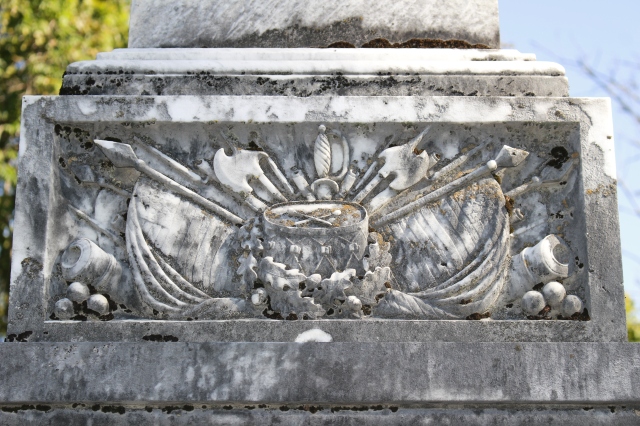 Hardin’s service as an emissary for President George Washington to the Shawnee Indian people garnered him the word SOLDIER to be carved into the monument.  It was his last official act in the service of his country and as President Washington’s friend.  The monument makes mention that he was “KILLED MAY 1792 WHILST BEARING HIS

COUNTRY’S FLAG OF PEACE TO THE INDIANS N. W. OF THE OHIO.”  The monument also states it is a cenotaph meaning his body does not lie beneath the stone but most likely somewhere in Ohio where he was struck down.

His stone also made note of him as a Christian.  He belonged to the Methodist Church of Shelbyville.