Posted on August 21, 2018 by gravelyspeaking

The elaborately designed Neo-classical sarcophagi of James B. Oliver and Frances Oliver Johnson in the Allegheny Cemetery in Pittsburgh, Pennsylvania, and the St. Paul’s Rock Creek Cemetery in Washington, D. C., respectively, are imbued with a profusion of symbolism.

The four corners are flanked with winged angels standing on pine needles and pine cones holding a palm frond in one hand and a laurel wreath in the other:

The palm frond is an ancient symbol of victory, dating back to Roman times when victors were presented with palm fronds. The palm fronds were also laid in the path of Jesus as He entered Jerusalem. So, for many Christians, the palm represents righteousness, resurrection, and martyrdom, symbolizing the spiritual victory over death associated with the Easter story.

The laurel wreath dates back to Roman times when soldiers wore them as triumphal signs of glory.  The laurel was also believed to wash away the soldier’s guilt from injuring or killing any of his opponents.  In funerary art the laurel wreath is often seen as a symbol of victory over death.

As is the case with many plants that are adopted by Christians it’s their characteristics that define what they symbolize.  Pine leaves are evergreen, which mean they stay green during the winter.  So, in this way, pine leaves came to symbolize immortality of the soul.   The pine cone carries the seed of the tree, so it symbolizes fertility.

In cemetery symbolism the poppy represents eternal sleep.  Just as it was portrayed in the movie, The Wizard of Oz, the main characters lie down in a field of poppies where they fall into a deep sleep.  That same imagery is used here.

The boughs of plenty repeat the poppies and pine cones woven through them.  Each bough on the sarcophagus is held up by turtles.  In some cases the turtle can be strictly ornamental or can represent strength, durability, and the virtue of longevity.

The ornamental post that holds the boughs is topped with an urn with a flame.   The flame, like many Christian symbols, has several different meanings—eternal life, religious fervor, and vigilance.  The flame can also represent martyrdom.  The other ornamentation on the base is a cow’s skull likely representing mortality. 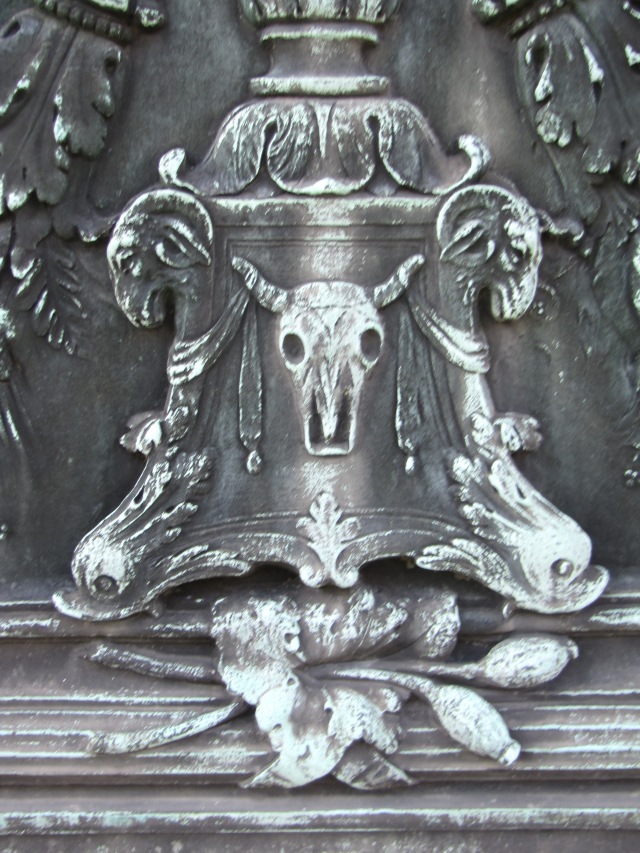 Topping off the Neo-classical design of the sarcophagus is the Neo-classical urn. The urn was used by Romans to store cremated remains and the willow was associated with the Persephone, the goddess of the underworld. Combined they represent the soul’s journey from the Earthly Realm to the Heavenly Realm. This design coincided with a Neo-classical revival that took place mid-18th Century in America. 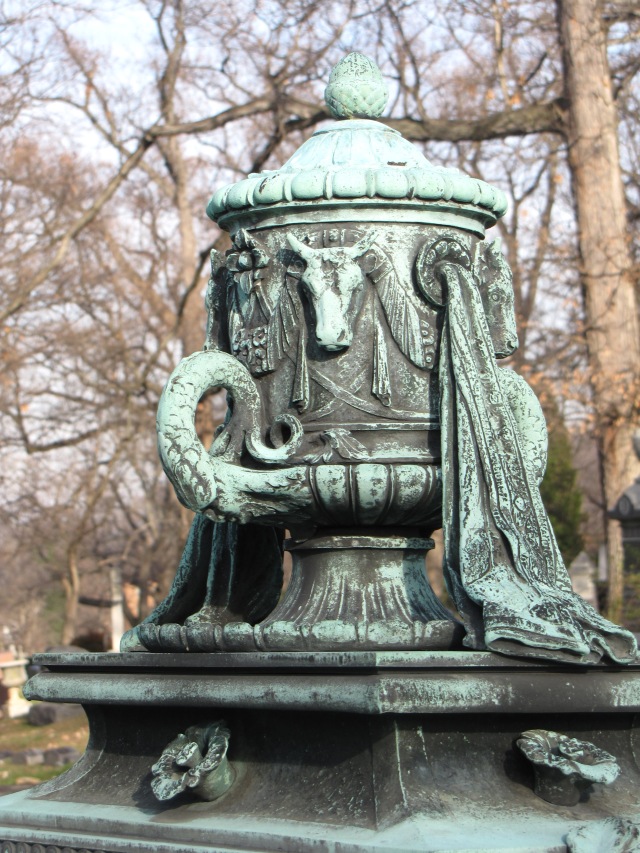