Posted on February 12, 2018 by gravelyspeaking

Two hundred and nine years ago today, Abraham Lincoln, who became the 16th president of the United States, was born, as every school child knows, in a log cabin in Kentucky.  From very modest beginnings, Lincoln rose to the highest office through wit, political cunning, and hard work.

In poll after poll, many historians and the general population rank Lincoln either as the first or second greatest president to ever have served in the office of the presidency.  He is credited, rightly, with navigating to preserve the Union with moral clarity and “malice toward none.”  And two of his speeches, the Gettysburg Address and his Second Inaugural Address, are considered to be two of the greatest speeches ever delivered in our history.

His second term, however, was cut short when an assassin’s bullet killed him.  After Lincoln took his last breath, Secretary or War Edwin Stanton reportedly said, “He now belongs to the ages.” The country wept and mourned the fallen president.  The day his death became known, leaders in Springfield began to plan for a suitable tomb to be constructed. 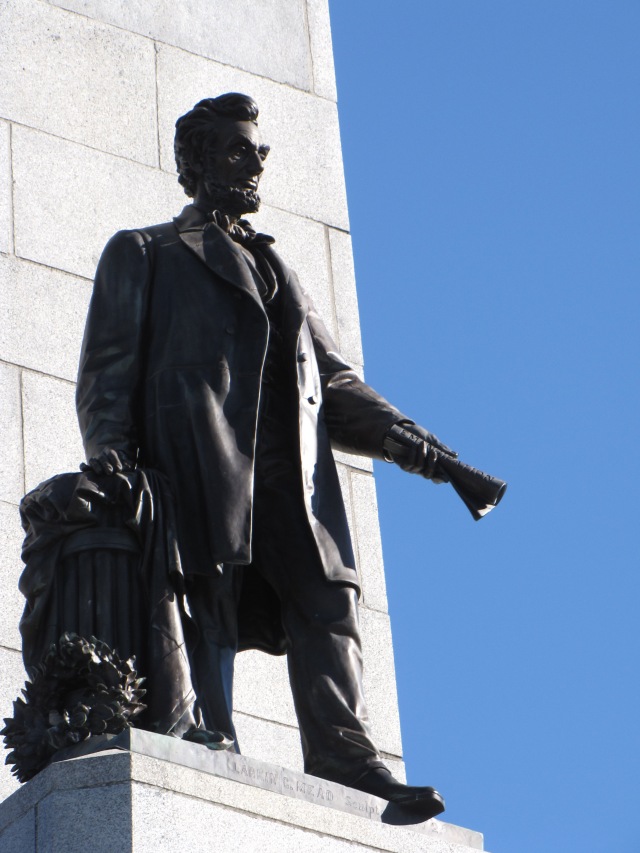 After lying in state, Lincoln’s body was transported by train to Springfield, Illinois. After his body was removed from the Statehouse, it was taken to a receiving vault in the Oak Ridge Cemetery.

The monument designed by the architectural firm of Larkin Goldsmith and Mead that now contains the mortal remains of President Lincoln, his wife, Mary Todd Lincoln and their three youngest sons, was completed in 1874.

The tomb, constructed of granite from Biddeford, Maine, has a large rectangular single story and a semi-circular entrance with a 117-foot obelisk rising from the center.  On either side of the entrance are staircases that lead to the top of the tomb’s terrace.  Four large semicircles form the base of the obelisk with bronze statues representing the infantry, navy, artillery, and cavalry that defended the Union.  On a pedestal directly in front of the obelisk is a bronze statue of President Abraham Lincoln.

In front of the tomb is a bronze sculpture of Lincoln’s by Gutzon Borglum.  Many tourists rub the sculpture’s nose for good luck leaving it shiny.

In 1876, two hapless criminals from Chicago were caught in a failed attempt to steal Lincoln’s body and hold it for ransom—for cash and the release of one of their jailed buddies.  When they enlisted a third partner to help with their scheme, they chose a Secret Service informant and were easily caught.  This caused the authorities to rebury Lincoln’s body in a more secure vault underneath the floor of the original burial chamber.  Since the death and burial of Mary Todd Lincoln, the president and their three sons, Edward, Willie, and Tad, have been moved several times within the monument.  Lincoln is secure in an underground vault—Mary Todd Lincoln rests along with her sons in crypts in the burial chamber room.