Posted on January 21, 2017 by gravelyspeaking 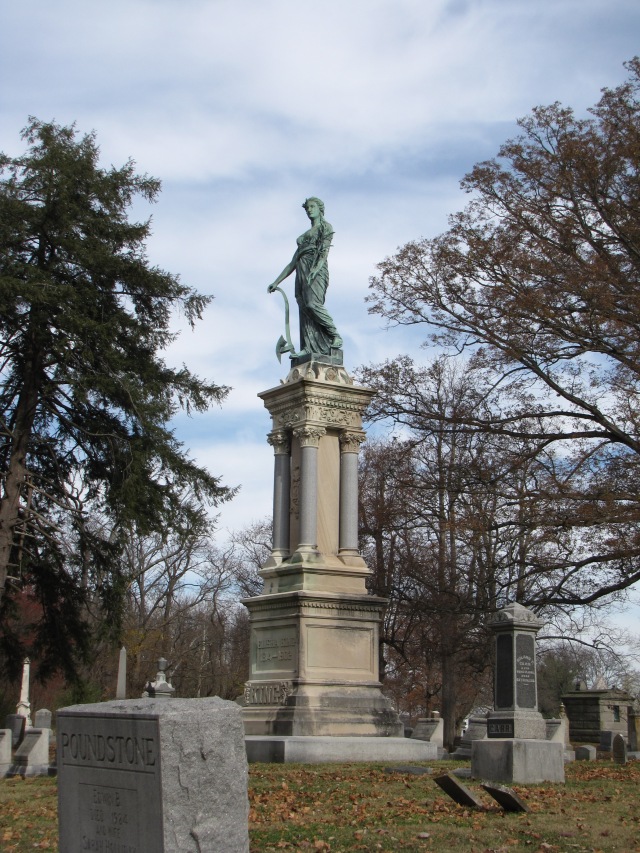 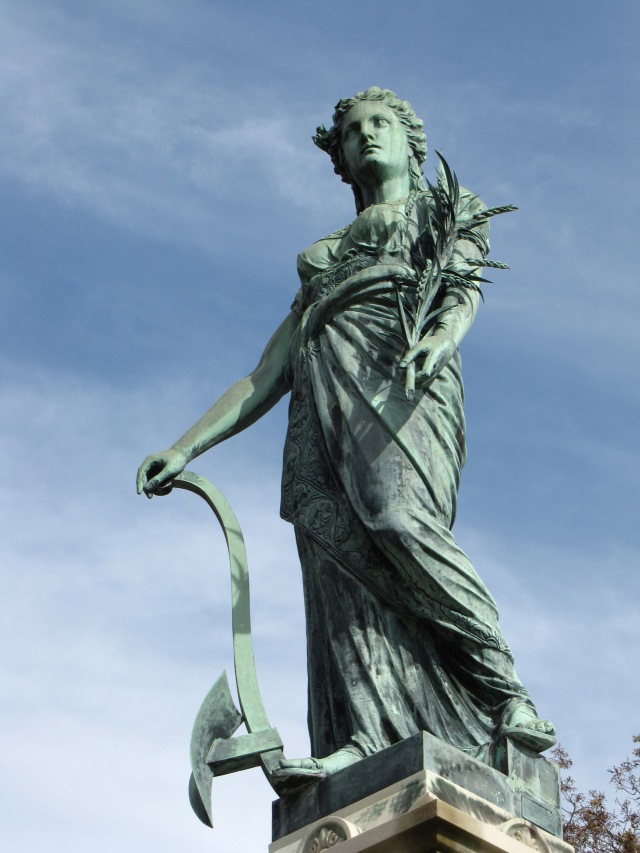 The following is part of a biographical sketch from the “Atlas of Rush County, Indiana“, published by J.H. Beers in 1879:

ELISHA KING – – Among the offspring of the early and hardy pioneers of the Western wilds, we find notable examples of men of vigorous thought and forcible character – men who would fill any station in life with fidelity and honor.  The subject of this sketch was born in Bourbon County, Ky., October 30, 1814, and is the son of Samuel King, who was born in Fauquier County, Va., in March, 1788, and Delilah (Beal) King, born in Bourbon Co., Ky. in 1791.  Tradition has it that the Kings came from Scotland, long before the war of independence, and probably as early as the Sixteenth Century settling in Virginia, where Elisha’s grandfather and father – Jesse and Samuel King – were born, this being as far back as we could trace the “family-tree”.

Jesse King moved to Kentucky when Samuel was a boy, where he grew up, and was married in 1810, to Delilah Beal, whose family were of Irish descent.  The Kings were among the first settlers in that part of Kentucky, and had to undergo all dangers and hardships related by history of “the dark and bloody ground”. In 1815, Samuel and family moved from Kentucky to Wayne County, Ind., Elisha then but 3 months old, and here his childhood days were spent.  At that time, Wayne County was a wilderness of forest, with but here and there a partially-cleared farm.  He could stand in his father’s cabin door and see the wild game disporting among the huge trunks of the primitive wood.  During his boyhood, wild deer were more plentiful than domestic cattle, and wild turkeys outnumbered the poultry of the barn-yard.  Such were the scenes amid which young King started in life.  He was the third in a family of twelve children, and the oldest son.  The family are as follows:  Cytha, Parmelia, Elisha, Ann, William, James, Archibald, John, David, Nancy, Eliza and Conwell, seven of whom are living…

Elisha being the oldest boy, much of the work on his father’s farm fell to his lot, and the advantages for attending school thereby much lessened.  In his boyhood, he went to a subscription school about three months – there being no such thing as a public school, or a dollar of school funds in the whole State at the time – therefore, when he reached his 18th year he could not tell one figure from another.  Feeling his great loss, he determined to have that knowledge seldom gained outside of the schoolroom, at the age of 22 he attended a high school five months in Centerville, Wayne Co., Ind. where he obtained a fair English education, being able today to solve any ordinary mathematical question. He was married in Wayne County, Indiana April 27, 1837, to Martha Ann Wood, daughter of David J. and Rebecca Wood, natives of Kanawha Co., Va.  Mrs. King was born in Wayne County, Indiana, April 19, 1818.  The following children were born to them: 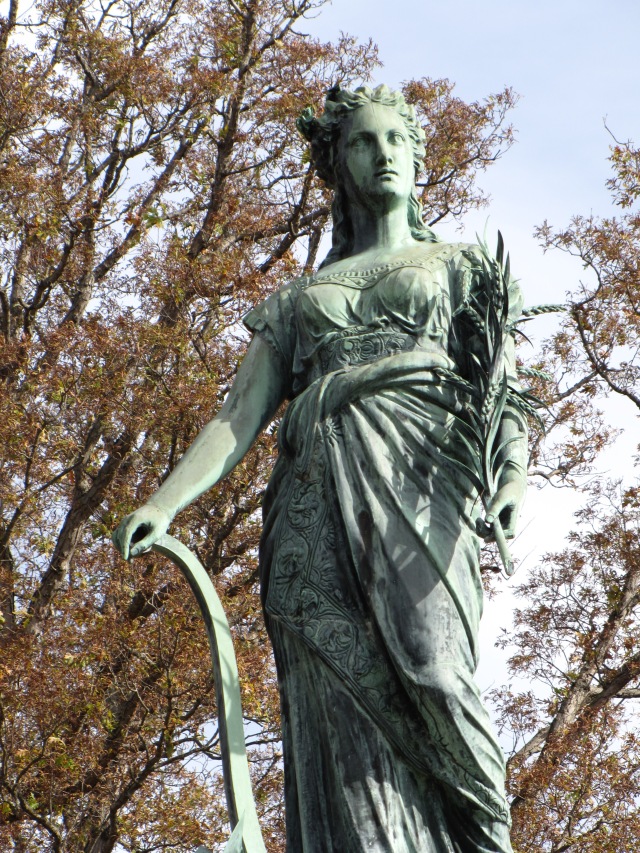 He was again married, June 15, 1858, in Rushville to Sallie B. Havens, who was born in this county May 5, 1826; she was the daughter of the Rev. James Havens, a native of Fleming County, Kentucky, and Aima (Higginbothom) Havens, born in Fayette County, Pennsylvania, who married in Fleming County, Kentucky, in 1809, moved to Highland County, Ohio, and afterward to this State, where they arrived in 1823, settling in Decatur County, moving to this county in 1825.  They died in Rushville; she March 23, 1864 and her husband, Nov. 4 following.  Mr. King has one child by this union – Fannie D. H. King, born Aug. 30, 1859.

…He came to this county in 1841, and settled on Section 24 of Rushville Twp. and has ever since lived in the same township.  He now owns 640 acres of the best land in Rush County, most of which he made by his own industry, always saving part of what he earned, and then investing those earnings judiciously.

Politically, he has belonged to the Republican party since it’s organization, before which he was a Whig, casting his first vote for William Henry Harrison, for President in 1840.  He has been Justice of the Peace, in Rushville Township four years and in 1874 was the nominee of his party for the Legislature, but through the influence of local issues, the whole of the ticket was defeated.  He has always been a zealous advocate never having used liquors or tobacco, and had done all in his power to counteract the terrible and baneful influence of whisky.  He had been a friend of religion and education all is life, and takes a lively interest in Sabbath-school work, in which he has been engaged twenty years.  He was Superintendent of Sabbath schools in Rushville and Anderson Twp. five years, and teacher of the same in Rushville nine years.  He belongs to no church, interpreting the Bible for himself but his sympathy and work has always been with Methodism.  Mrs. King being the daughter of such an eminent Methodist divine, is a strict follower of the Methodist Church and an earnest worker in the good cause.  Mr. King has taken an active part in every public enterprise of the county since his residence in it, and had devoted as much as most citizens of Rush County toward the building of turnpikes, having given $2000 for that purpose.  When J.M. & I. Railroad was built, Mr. King was a poor man, but gave $600 toward helping on that necessary enterprise, and has given $200 to the C.H. & I. Railroad.  He was one of the first members of the Rush County Agricultural Society, and has been a Director of the same several times, which position of trust and confidence he now occupies and has worked hard and earnestly for its success since its present organization.  In fact, Mr. King is a public-spirited man in every sense of the word, and has, in long years of active business enterprise and continued industry amassed an ample fortune.  His actions have ever been characterized by strict honesty and sterling integrity, and he has enjoyed a uniform and unwavering prosperity for many years.

After the death of his second wife, Sarah, Elisha King married his third wife, Alice M. Waddell, on October 21, 1885, to whom he was married until his death on February 6, 1902. King had suffered for nearly four weeks with pneumonia before he succumbed. He was buried on February 9th, 1902—in the East Hill Cemetery at Rushville, Rush County, Indiana.

The East Hill Cemetery was laid out in June of 1859 by the renowned landscape designer Leopold Weltz, who had been the landscape architect for the King of Prussia and Czar of Russia before he migrated to the United States to practice his craft in the gardens and cemeteries of Ohio and Indiana. Welz laid out the East Hill Cemetery to be a “garden cemetery” which was a movement away from ‘burial grounds” to more serene park-like cemeteries. The movement started at the famed Pere Lachaise Cemetery at Paris and spread to other parts of the world.

In June of 1903, the Elisha King monument was erected in Section 3, of the East Hill Cemetery in the King family plot. The monument was created by the W.H. Mullins Company of Salem, Ohio. Tony Schrichte designed the monument. The sculptor is listed as PELLER on the monment. 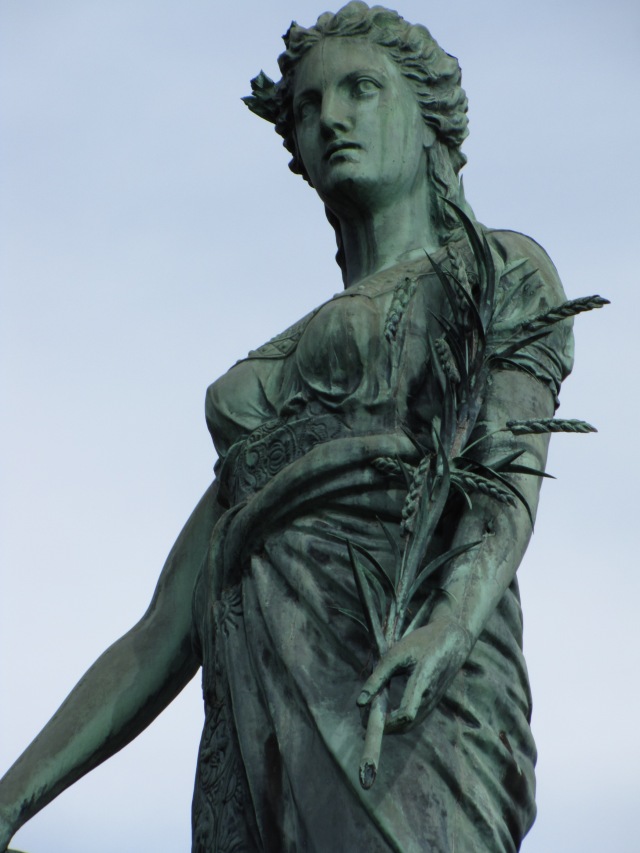 In 2012, the cemetery board applied to have the cemetery placed on the National Register of historic Places. In the application, the committee wrote this about the monument on the King plot, “By far the largest of these [monuments and gravestones within the cemetery] is that of Agriculture cast about 1903 for the grave of Elisha King, prominent farmer and community leader and early member of the cemetery board. “The tallest statue in the cemetery is…A sixteen-foot bronze statue of an allegorical figure of Agriculture stands atop an ornate granite base twenty feet high. The base resembles a small Classical temple. The plinth has large panels, one of which is carved ‘ELISHA KING/1814-1902” in raised lettering. Atop this base is a shaft surrounded by four Corinthian columns that supports a full entablature with foliate frieze, dentil, and egg-and-dart moldings. This in turn supports the heroic bronze statue, a robed female figure holding a sheaf of wheat … in her proper left hand while her right hand rests on a plow.” 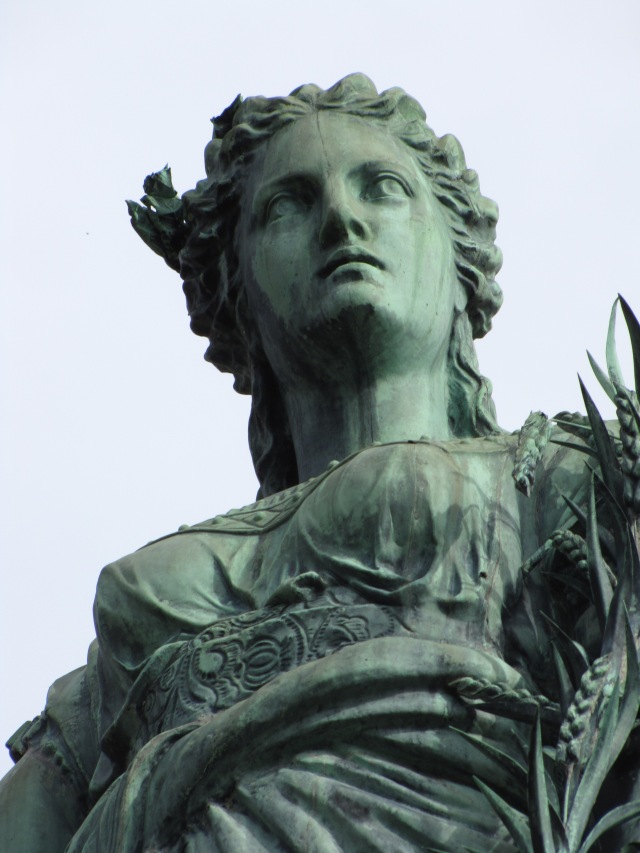 The majestic 16-foot bronze sculpture of the female figure atop the 20-foot King monument is an allegorical figure representing agriculture, for which, Elisha King owed his fortune.   Agriculture had been King’s life’s work. The monument is a proper and fitting tribute to such a successful and prosperous farmer. 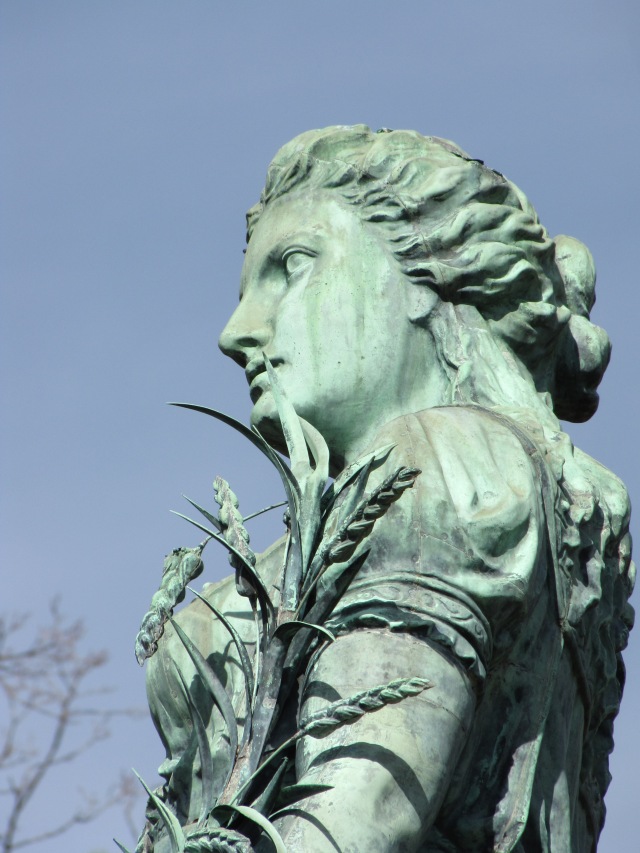