Posted on January 7, 2017 by gravelyspeaking 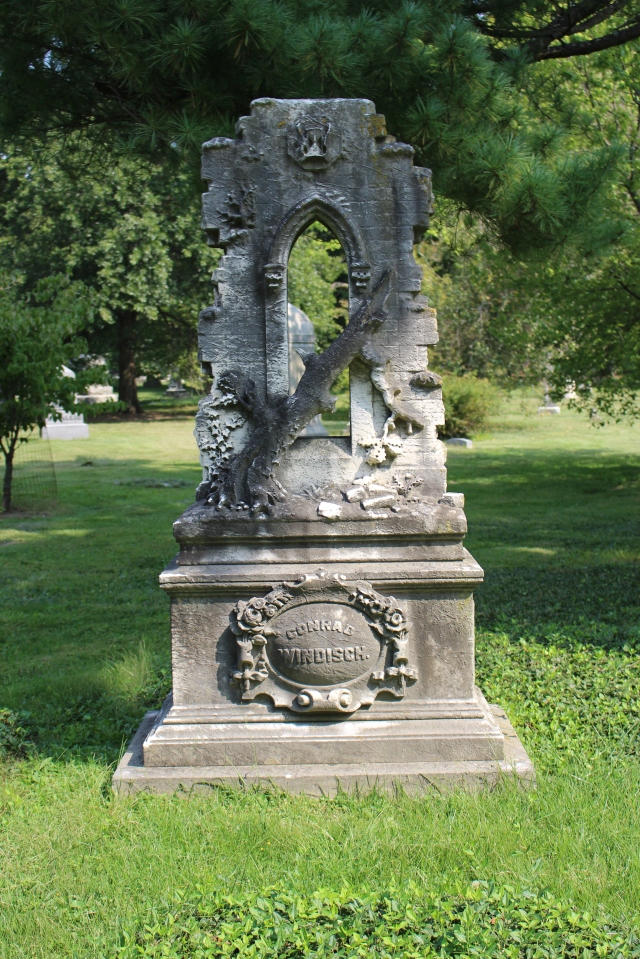 A passerby in the Spring Grove Cemetery strolling past the gravestone of Conrad Windisch might mistake it for a ruin—which was the whole idea. The white-marble marker carved to look like an English abbey ruin has a gothic pointed-arched window with a tree stump leaning across the face of the stone signifying a life cut short. Above the window is a winged hourglass. The soap opera, Days of Our Lives, has as their catchphrase, “Like sands through the hourglass, so are the days of our lives.”  The meaning of that catchphrase is clear–life passes by very quickly.  Life measured by the grains of sand slip through one side of the hourglass to the other in a flash.  The hourglass symbol on a gravestone, represents the same thought of time fleeting by quickly. All of this sits on a large base with a large oval convex cartouche with “Conrad Windisch” carved into it. 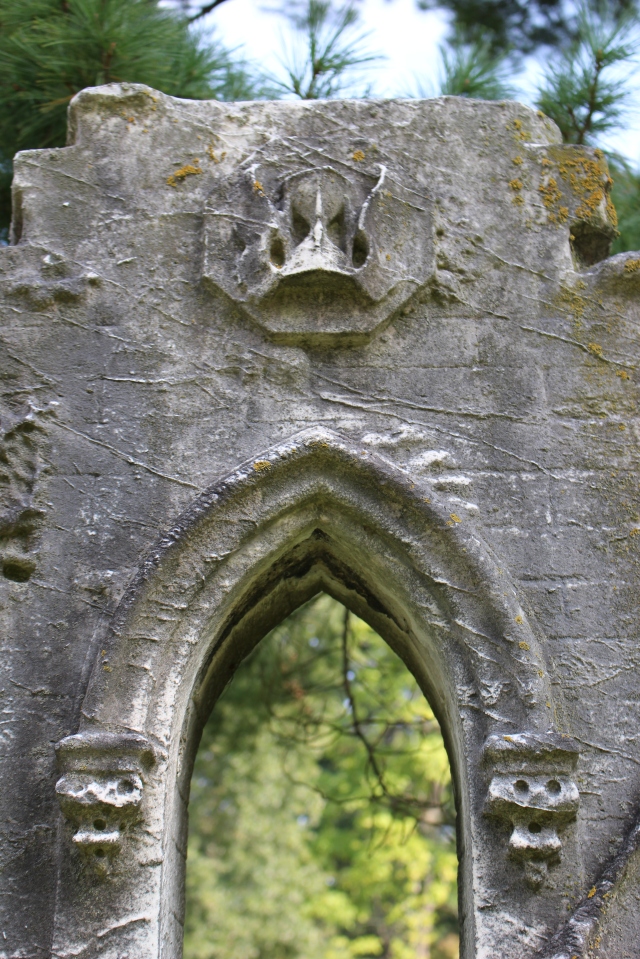 The gravestone marks the graves of Conrad and Sophie Windisch. Conrad was a German immigrant from Munich who settled in the United States in the mid-19th Century. After working for several brewers Windisch founded his own brewery with his business partner and brother-in law, Gottlieb Mulhauser. The building that housed the enormous brewery had two large stone lions in the gables on top leading to the brewery’s unofficial name—Lion Brewery. Windisch and Mulhauser were very successful and became the largest brewer in Ohio. 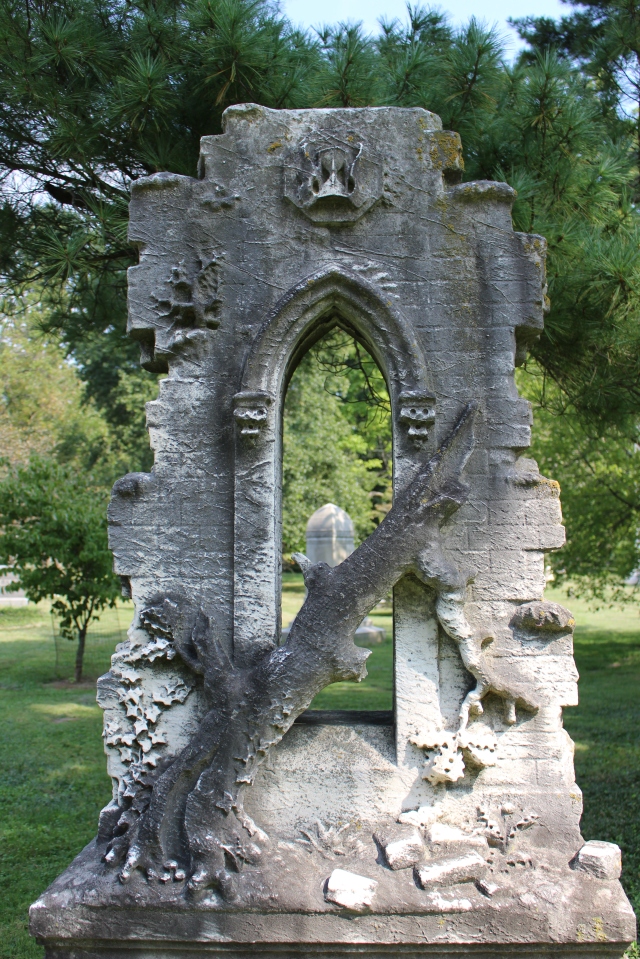 The Windisch gravestone harkens back to the 18th Century when English gardens were quite often landscaped to feature faux Roman temples and decaying English castles and abbeys. These became known as Victorian follies—that is a building or structure that was built first and foremost as decoration but suggested some other high purpose or former use. 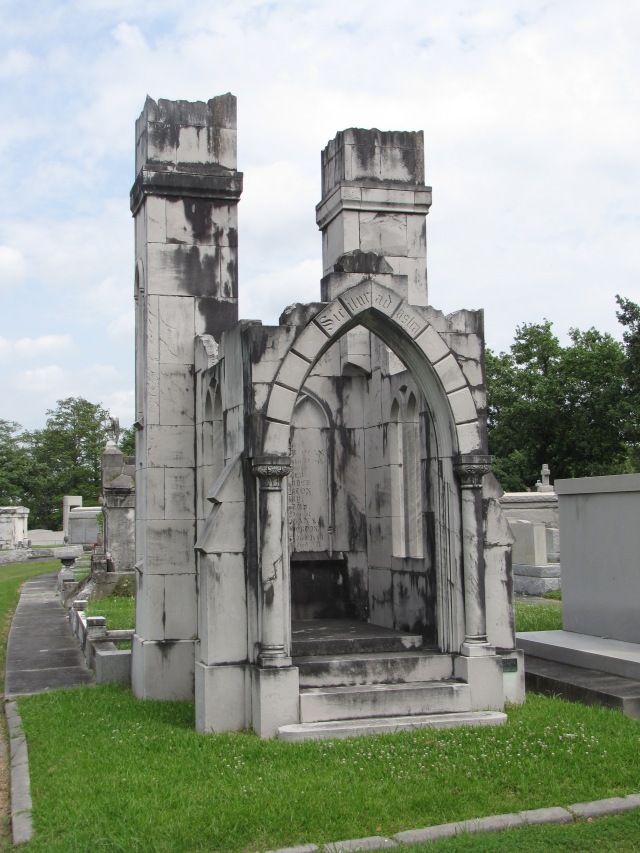 One of the most interesting monuments in the Metarie Cemetery in New Orleans, Louisiana, was built for Henry J. Egan, a Confederate Lieutenant Colonel, who was killed April 6, 1865, at Amelia Springs, Virginia, during General Robert E. Lee’s retreat. The monument was built to appear like a ramshackle Gothic Revival-style Church. It is a sham, however. The ruin was designed by Charles A. Orleans, one of the leading monument builders in New Orleans at the time, who was at the height of his fame when it was built in 1881. The Victorian folly, built to look like one thing when it is actually another, is a marble monument complete with mock cracks and crumbling stone to deceive the passerby. Carved above the arched doorway into the tomb are the words, “Sic itur ad astra” – Latin which translates to “Thus to the stars”. 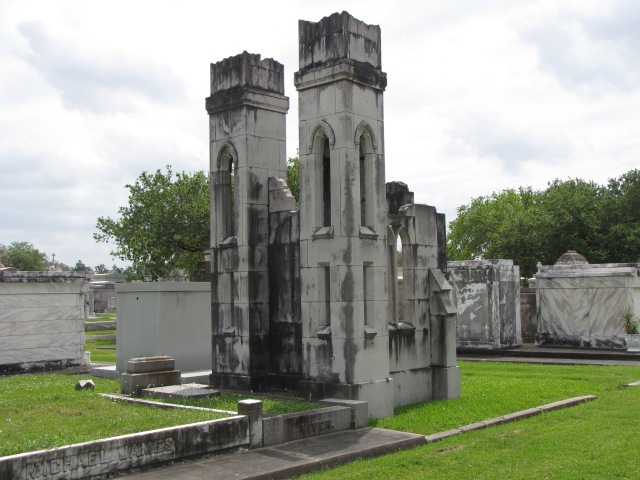 As author Phil Nuxhull writes in his book, Beauty in the Grove: Spring Grove Cemetery and Arboretum, the Windisch gravestone, like the Egan monument, conveys the “transitory nature of all earthly things.” 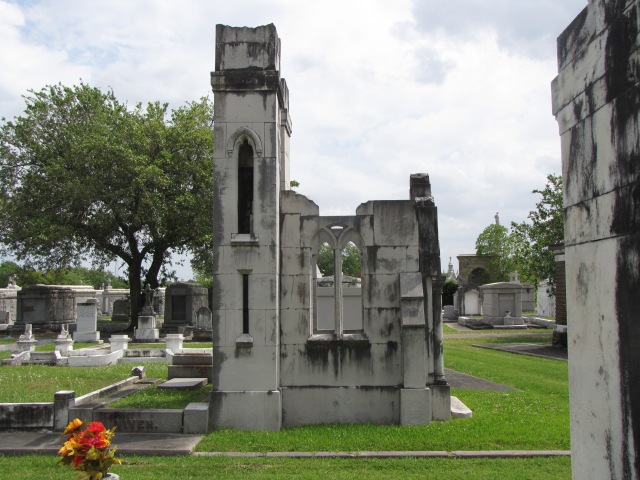 (Inscription on the back wall of the church)

The Good Sons of

While in command of

Killed at the Battle of Sharpsburg

Buried with them in

Frederick Egan and his wife

(inscription on the back of the building)