Posted on September 6, 2016 by gravelyspeaking

After the French and British occupations of Egypt, there was a renewed interest in Egyptian architecture and symbolism in America. The evidence of the influence of Egyptian design can be found in nearly every American cemetery, especially large urban cemeteries. The Highland Cemetery in Terre Haute, Indiana, the second largest cemetery in the state, has many examples that come in many different forms.

The pyramid is by far the epitome of Egyptian funerary architecture, the tomb of the pharaohs, and the quintessential example of great Egyptian architecture.  The oldest pyramid is the Pyramid of Djoser built over four thousand years ago from 2630 BC to 2612 BC.  The largest of the Egyptian pyramids is the Pyramid of Khufu at Giza built between 2589 and 2566 BC. This gray granite monument shaped as a pyramid is near the entrance to the Highland Cemetery. The monument gives one the sense of solemnity and a sense of eternity, reminiscent of the temples of the pharaohs. 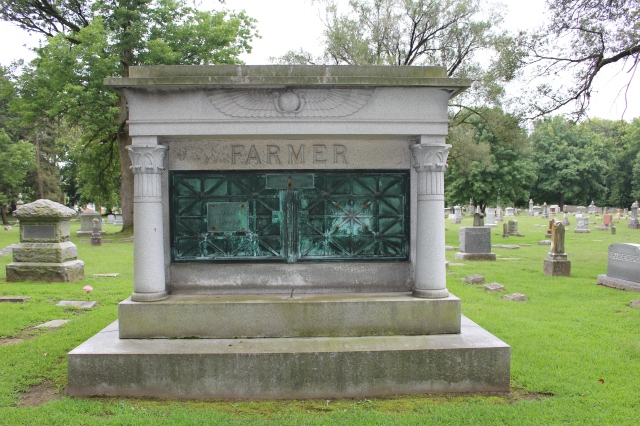 Funerary art and architecture was designed to illicit emotions, such as the finality of death and the Christian ideal of eternity. The Farmer and the Fuller mausoleums are examples of the Egyptian Revival architecture found in the Highland Cemetery.  Both mausoleums have many features of Egyptian temples–the cavetto cornice that curves into a half circle at the top of the tombs and the heavy columns that are designed to emulate long bundled plants with stylized palm leaves at the top. The G. E. Fuller mausoleum is plain and fairly without design. The Farmer mausoleum again features two winged globes with snakes waiting to strike with three sets of falcon wings symbolizing of the king, the sun, and the sky.  The globe represents the Egyptian god, Horus.

The Ayer Family Monument is an example of the influence of the Egyptian revival found in American cemeteries in the 19th century and on into the 20th century. Egyptian ornamentation can be divided into three categories—architectural, geometric, and natural.  The monument has strong and commanding architectural features. The sides of the monument tilt slightly inward forming a doorway, the cavetto cornice curves into a half circle at the top. The top of the monument features a globe with three sets of falcon wings that are a symbol of the king, the sun, and the sky. The globe represents the Egyptian god, Horus. They symbolize the king’s ability to ward off evil spirits. Two snakes face outward ready to strike. Below the opening are stylized long slender stems of the lotus flower, sacred to the Egyptian and Buddhist cultures. The Lotus represents purity and evolution. The lotus is born in the water, the primordial ooze—making it also a symbol of creation and rebirth. The urn is a popular symbol of mourning that represents mourning. The urn symbolizes the body as a vessel of the soul, originating as an ancient repository for the ashes of the dead.

The Egyptian symbol that is most commonly found in American cemeteries is the obelisk.  The Georgia Marble Company published a book (page 63) describing the obelisk, saying “The steeple of the Church symbolizes the spiritual and uplifting power of religion and the moral aspiration of man. It was evolved from the obelisks which stood before Egyptian temple—emblems of the sun god Ra and the regeneration of man. It has long been a favored form for the civic and private memorial. Towering heavenward from a slightly location, the obelisk probably ranks among the most simple and impressive of all monuments.” 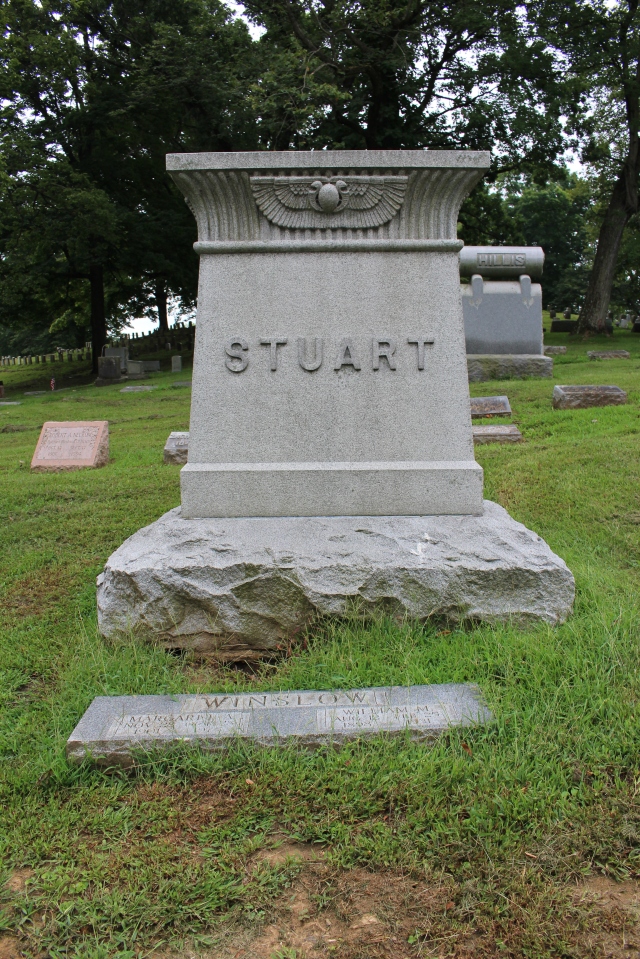 The Stuart Family gray granite monument is plain but has several distinctive features influenced by Egyptian design—such as the cavetto cornice that curves into a half circle at the top and a highly stylized globe with snakes waiting to strike with three sets of falcon wings symbolizing of the king, the sun, and the sky.  The globe represents the Egyptian god, Horus.

The Helmer Family gray granite monument is plain but has several distinctive features influenced by Egyptian design. The mock cavetto cornice curves into a half circle at the sides replicating the traditional cornice. The highly stylized globe and snakes waiting to strike feature two sets of falcon wings incised into the face of the stone.  On each side of the face of the monument are stylized lotus leaves carved into the granite.

This entry was posted in Symbolism, Tombs. Bookmark the permalink.