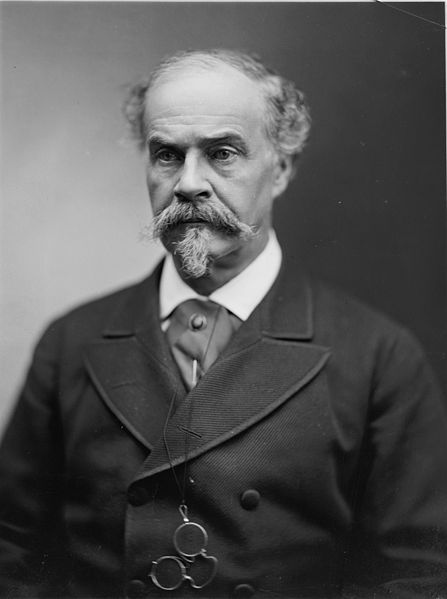 William Wetmore Story (February 12, 1819 – October 7, 1895), the son of Joseph Story—Supreme Court Justice from 1811—1845, was a multitalented Renaissance man. Story was an editor, poet, art critic, and an incredible sculptor. Though trained as a lawyer at the Harvard Law School, he abandoned the legal profession to follow the arts.

His body of art work includes among others, a sculpture of his father, Joseph Story, fittingly at the Harvard Law School and a statue of another famous jurist and judicial colleague of his father’s, Chief Justice John Marshall. But the sculpture that has become replicated and imitated in cemeteries in Europe and America is the monument that he carved for his wife’s grave in the Protestant Cemetery in Rome, Italy.

An article written in the Sept. 1896, issue of Cosmopolitan Magazine stated:

“The loss of the wife of his youth whom he survived but a year, was a bitter blow; and with her passed his interest in affairs. It was only when his children suggested that he should make a monument to her memory that he consented to resume work; the design he chose was the “Angel of Grief”, and it is wrought to exquisite finish…When this was done he left the studio never to return.”

The statue marking Emelyn and William Wetmore Story’s grave depicts an angel collapsed and distraught in grief. The statue is dramatic and evokes the solemn loss of a loved one. The statue is known, aptly as the Angel of Grief perhaps because of its ability to capture devastating grief from departure due to death.

The statue’s imitators can be found in many cemeteries including the ones below:

Perhaps one of the most elegant examples can be found in the Metarie Cemetery at New Orleans in the Chapman H. Hyams mausoleum. The blue light from the stained glass showers the statue in a calming hue.

This example is in the Mount Hope Cemetery at San Diego, California, and marks the grave of Marjorie Marie Pierce.

Marking the grave of the Hill Family in the Glenwood Cemetery at Houston, Texas, is a replica of nearly exacting quality.

Irene Bagby’s marker in the Serbian Cemetery at Colma, California.

Jennifer Roosevelt Pool’s monument in the Cypress Lawn Cemetery at Colma, California. Pool was the cousin of President Theodore Roosevelt. 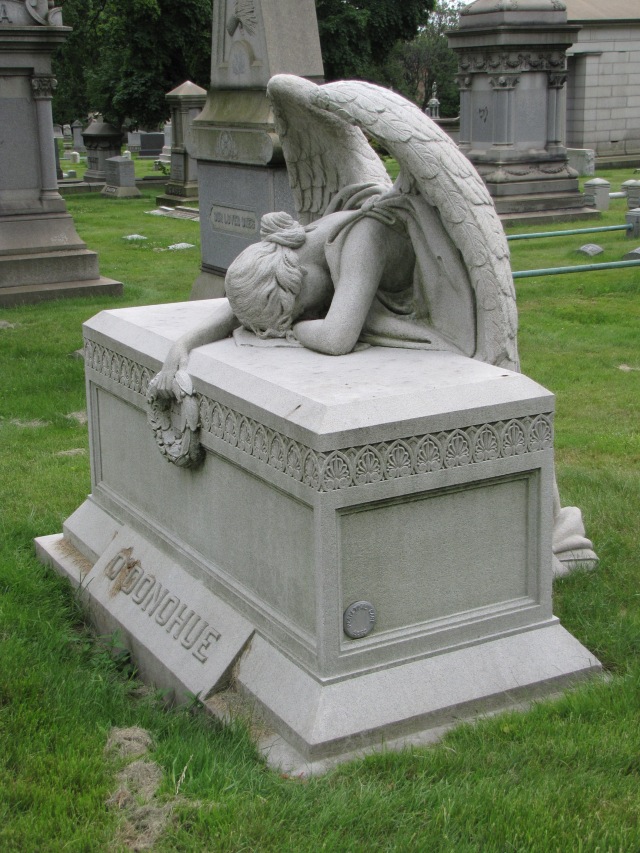 Two examples in the Green-wood Cemetery at Brooklyn, New York, have a slightly deviated design. In this version for the O’Donohue Family has the angel holding a wreath. The laurel wreath dates back to Roman times when soldiers wore them as triumphal signs of glory.  The laurel was also believed to wash away the soldier’s guilt from injuring or killing any of his opponents.  In funerary art the laurel wreath is often seen as a symbol of victory over death.

This example is also found in the Green-Wood Cemetery at Brooklyn. It marks the grave of Michael and Shamsi Kaydouh.

This example is found in the St. Luke Cemetery at Chicago. It is a small version and does not mark a grave but is used as a piece of artwork for the cemetery.  On the front of the monument is the poem:

The bud was spread, To show the rose

Our Savior smiled, The bud was closed.