KILLED IN BATTLE BEFORE PETERSBURG VA

DIED IN A MILITARY HOSPITAL AT

IN MEMORY OF THREE BROTHERS BORN IN CONCORD

WHO AS PRIVATE SOLDIERS GAVE THEIR LIVES

IN THE WAT TO SAVE THE COUNTRY

THIS MEMORIAL IS PLACED HERE BY THEIR SURVIVING

BROTHER HIMSELF A PRIVATE SOLDIER IN THE SAME WAR

“I WITH UNCOVERED HEAD

WHO WENT AND WHO RETURN NOT”

When James Melvin came back from the Civil War after serving in the 6th Massachusetts Infantry, he was not joined by his brothers, Asa, John, and Samuel. They had all served in the 1st Massachusetts Heavy Artillery unit which took heavy losses throughout the war. John was the first to perish—he at a military hospital in Fort Albany, Virginia. Asa died on the battlefield during an assault on Petersburg, and Samuel, who had been captured, died at the infamous and reviled Andersonville prison.

James, the fourth and youngest brother, later became a successful businessman and commissioned Daniel Chester French to design a memorial to his three fallen brothers. Daniel Chester French was arguably the most noted sculptor of his day, creating such monumental works as Minute Man at Concord, Massachusetts, the Marshall Field Memorial in Graceland Cemetery at Chicago, and his most famous work—the Seated Lincoln in the Lincoln Memorial at Washington, D.C.

To create what he titled, Mourning Victory, French hired Audrey Munson to model for the sculpture. Though, Munson, is not a household name like Cindy Crawford, Gisele Bundchen, or Christy Brinkley, some say, Munson was America’s first supermodel. Her likeness can be found today in statues in New York, Wisconsin, California, and as far away as the Netherlands. Audrey became the model of choice for acclaimed artists, such as, Alexander Stirling Calder, Karl Bitter, Sherry Edmundson Fry, Adolph Alexander Weinman, and of course, Daniel Chester French.

Not only was she a model to be found on statues from coast to coast, but she posed for the Walking Liberty dollar designed by Adolph Alexander Weinman. It is believed, she is the model for the Liberty Dime, too, which he also designed.

Her likeness can be found on magazine covers of the time and she also worked in the fledgling movie industry appearing in four silent movies—Inspiration in 1915, Purity in 1916, The Girl o’ Dreams in 1916, and Heedless Moths in 1921. Audrey Munson was the first actress to appear fully nude in a film—Inspiration.

Sunset magazine, (October 1915) her image in a sculpture by Alexander Weinman

The sculpture by French for the Melvin Brothers Memorial is titled Mourning Victory. It features a woman as the allegorical figure of victory. The Metropolitan Museum of Art in New York City, which has a replica of the statue in marble in their collection, describes the statue, “The massive figure of Mourning victory emerges from the block of stone projecting two moods: melancholy, in her downcast eyes and somber expression, and triumph, in the American flag and laurel she holds high. French captured the sense of calm after the storm of battle, which must have referred to the pride, after the sorrow of grieving, felt by the surviving brother.”

The monument is a tribute not only to the Melvin Brothers and to the soaring talent of French, but to Audrey Munson, who was the muse for so many artists of her day. 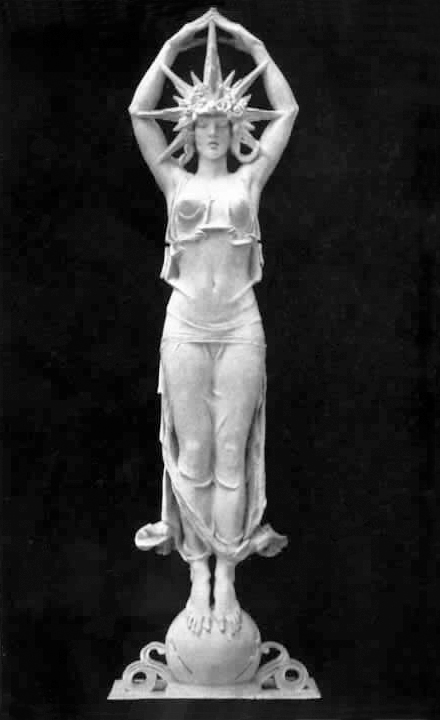 In 1922, Munson attempted suicide. Nearly ten years later, her Mother petitioned to have Munson committed to an insane asylum, which is where she spent the last 65 years of her life—dying at the St. Lawrence State Hospital in Ogdensburg at the age of 104 years old. Munson is buried in the New Haven Cemetery at new Haven, New York, in an unmarked grave. Her image, however, lives on.