Lorado Zadoc Taft (April 29, 1860 – October 30, 1936) one of the great American sculptors of the late 19th and early 20th Century, was born at Elmwood, Illinois. His parents, a homemaker and a professor of geology, homeschooled young Lorado before he went on to the Illinois Industrial University (which later became the University of Illinois at Urbana—Champaign), where he received a bachelor’s and master’s degree. He then studied abroad at the famed École nationale supérieure des Beaux-Arts from 1880 to 1883, in Paris where he was widely recognized for his talent. He returned to the United States and settled in Chicago where he took up a career as an artist and a teacher. Lorado Taft was one of the premier sculptors of his day.  He was a widely published scholar on the topic and his work was highly sought after.  He was commissioned to produce many public works including The Soldier’s Monument in Oregon, Illinois, The Solitude of the Soul Sculpture at the Art Institute of Chicago, and The Fountain of Time in Chicago.

His works also include funeral or cemetery monuments such as the Victor Lawson monument in the Graceland Cemetery at Chicago. Only a master carver could sculpt this magnificent statue from stone as hard as granite. The celebrated Lorado Taft created the monument in 1931, for newspaperman Victor Lawson (1850-1925).   Lawson had inherited SKANDINAVEN, a Norwegian-language newspaper, but met Melville E. Stone, Chicago Daily News founder and purchased the Daily News in 1878. 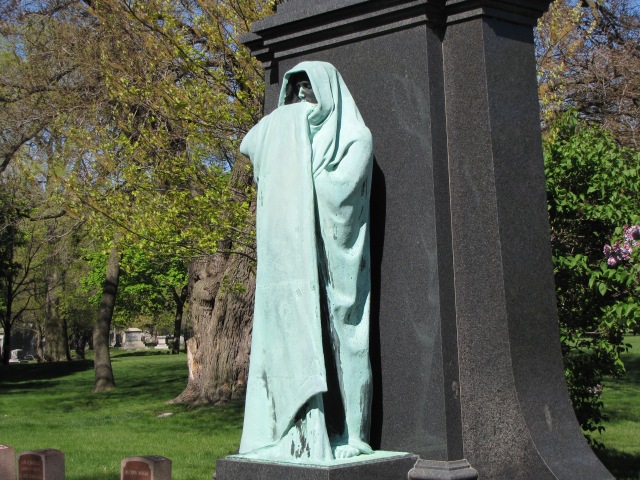 Taft was also commissioned in 1909 by Henry Graves, of Chicago, to create a monument for his father, Dexter Graves [1789-1844].  The Graves family had long been in America, their first ancestor, Thomas Graves, crossed the Atlantic and settled in Connecticut in 1645.  Dexter Graves himself was a pioneer and was one of the earliest settlers in Chicago who, according to the inscription on the back of the monument, “brought the first colony to Chicago, consisting of 13 families, arriving here July 15, 1831 from Ashtabula, Ohio, on the schooner Telegraph.” 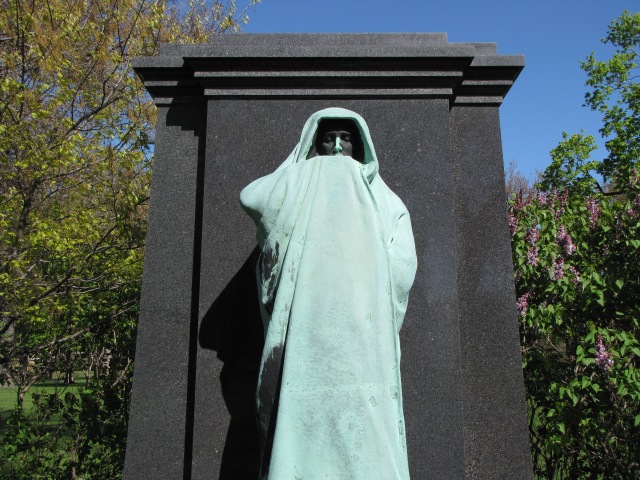 The bronze figure that Taft created is named Eternal Silence, an obvious metaphor for death.  The foreboding cloaked figure stands against solid black granite–black being the traditional color representing mourning and death.  The figure has his eyes closed and gathers the shroud to his lips preventing him from speaking. The bronze has an eerie feel to it, in part, because of the way the patina has formed on the statue.  The shroud has a greenish blue unnatural color.  Except for a highlight on the nose, most of the face has remained dark and recedes from the hood, making it appear more menacing and mysterious.

Taft is noted as a ground breaker of sorts. He was working on several projects for the World’s Columbian Exposition in Chicago that was to open in 1893. The chief architect of the project was Daniel Burnham. Burnham approached Taft saying that he was worried that Taft would not be able to complete all of the sculptures for the exposition. Taft asked if he might hire some of the women students who were studying art from him at the time. Burnham’s off-the-cuff remark was supposedly, “Hire anyone, even white rabbits if they’ll do the work.” From that grew a group of artisans who became known as the White Rabbits, many who went on to become noted sculptors at a time when it was not socially acceptable for women to be in the profession. Nellie Walker, though, not a White Rabbit, also worked with Lorado Taft, became a noted sculptor, as well. She studied with Taft and worked as an assistant in his studio in Chicago. In fact, when Taft died in 1936, Walker was hired to help complete the public sculpture Taft was working on at the time of his death.

As noted, Taft sculpted monumental public works, such as “The Pioneers” which stands in the city park in Elmwood, Illinois. The plaque has the following inscription: 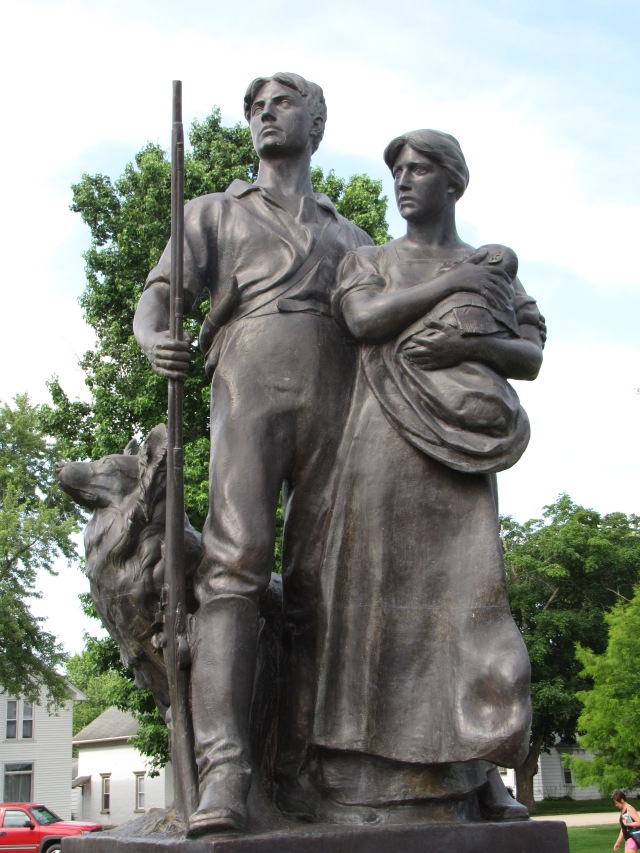 The works: Lorado Taft’s heroic-sized bronze work…a tribute to the pioneers…captures the essence of bravery, determination, and faith of the men and women who “bridged the streams, subdued the soil and founded a state.”

Taft created the sculpture as a gift to honor the place of his birth. The community launched an ambitious campaign to raise over $15,000 for casting and mounting. Donations included school children’s dime-collection rulers and contributions from townspeople and former residents.

The statue serves as a reminder of the past and as an inspiration to the pioneering spirit in those who view it.

The artist, Lorado Taft…”Who has done most for the development of sculpture in the West”…was born in Elmwood at 207 East Cypress, April 29, 1860 to Don Carlos Taft, Headmaster of Elmwood Academy and Mary Lucy Foster Taft.

When Lorado was 11, his father joined the faculty of the University of Illinois. Young Lorado enrolled at the university at the age of 15 and at 19 received his master degree. After years of study at the Ecole Des Beaux Arts in Paris, he opened a studio in Chicago.

Taft’s works include the Fountain of the Great Lakes and Fountain of Time in Chicago, Blackhawk on the Rock River near Oregon, Illinois and the Alma Mater and others at the University of Illinois in Urbana.

Lorado Taft died at his Chicago Home October 30, 1936. After cremation, he ashes were scattered in the Elmwood Cemetery near family and friends.

As the plaque above states, Taft’s ashes were scattered in the Elmwood Cemetery at Elmwood. A monument to him was erected with a small replica of one of his own favorite sculptures mounted on top of a rose-colored granite base.

The plaque in front of his memorial states:

“MEMORY” IS A SMALL ORIGINAL REPLICA OF AN

IN WOODLAND CEMETERY IN JACKSON, MICHIGAN,

WAS A FAVORITE OF TAFT’S WIFE.

“MEMORY” WAS DEDICATED IN HIS HONOR AT THIS