Posted on November 20, 2015 by gravelyspeaking

There is a story about “the girl in the shadow box”. It is an ancient story told and re-told of unrequited love that is also told about this statue. According to local St. Louis lore, the Herman Luyties’ (1871-1921) Monument in the famed Bellefontaine Cemetery displays the bodacious beauty sculpted marble likeness of an Italian model. As the story goes, Herman met her around the turn of the 20th Century while he was touring Italy.

Luyties was a highly successful St. Louis businessman who toured Europe.  While there, he fell in love with the voluptuous Italian and asked for her hand in marriage.  She declined.  He left the country broken hearted and without the love of his life.

But, before Luyties left Italy he commissioned a sculptor to replicate his true love in stone.  The statue that now adorns his grave, first graced the entryway of his home–a constant reminder of unrequited love.  The sculpture, weighing several tons, was moved from his home to the cemetery.  When the sculpture started to weather, Luyties had the monument front glassed in which is how the monument gained the moniker, “the girl in the shadow box.” 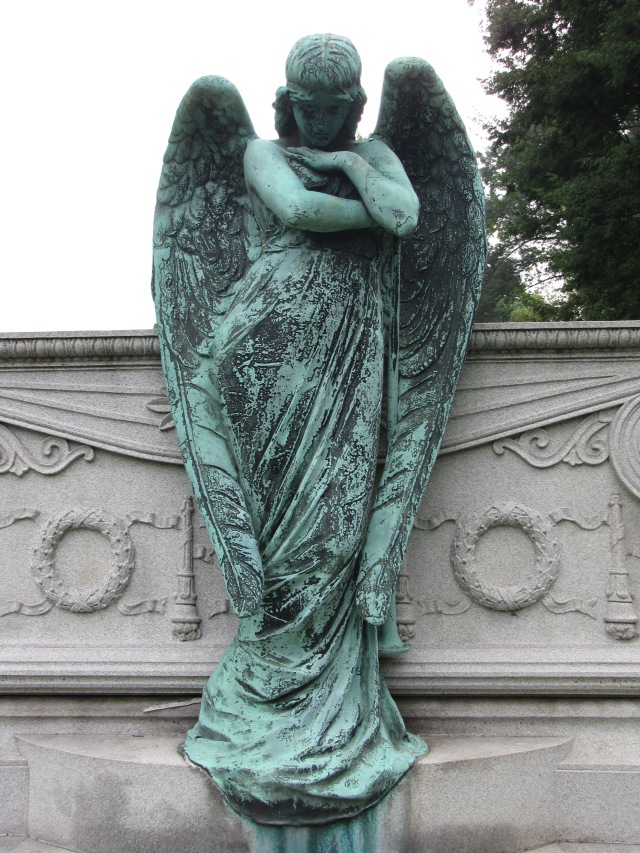 The image of the woman at the center of this story can also be found only a short distance from Luyties monument in the very same cemetery. The Christopher Edward Hilts (November 16, 1842 – November 16, 1928, he died on his birthday) and Elizabeth Mary Hilts (December 12, 1840 – November 30, 1899) family monument features a bronze statue of an angel with all of the same physical characteristics of Luyties’ supposed lover.

Virtually the same image can be found in the Green-Wood Cemetery at Brooklyn, New York, in the form of an angel–the hair, that body, even the drapery falls in the same way.  The statue that is strikingly similar marks the graves of John Campbell Maben (1837-1924) and Virginia Maben (died 1912) which raises the question about the Luyties story from St. Louis—was she real? Or is this figure the 1920s archetype graveyard female? Head tilted downward in sorrow, bobbed hair with a headband, and a pose of false modesty partially covering up her full body.