For single Parisian women who are yearning to get married or married women who are wanting a better sex life there is one monument in Le Père Lachaise that can help, or so the legend goes….

Yvan Salmon was born July 27, 1848 in Attigny, Vosges, France. Yvan adopted the pen name of Victor Noir and moved to Paris to work as a journalist for the La Marseillaise newspaper. La Revanche and L’Avenir de la Corse, two newspapers on the tiny island of Corsica became embroiled in a duel of words which eventually spilled out into the streets of Paris. The Paris newspaper that Victor worked for La Marseillaise sided with La Revanche which had printed incendiary criticisms of Napoleon I. Prince Bonaparte wrote to the offending editor of the newspaper and called them cowards. The imbroglio eventually involved Parschal Grousset who was challenged to a duel by Prince Bonaparte. Grousset sent Victor Noir and Ulrich de Fonvielle as his seconds to work out the details of the duel—time, place, etc. But instead of working it out with the Prince’s seconds as custom would have dictated, the two men went to the Prince’s home to speak to him directly. Something happened at the Prince’s home, the details are disputed, but Victor Noir ended up dead, shot by the Prince. Those against King Napoleon III’s unpopular regime were outraged and saw the Prince’s actions and acquittal as royal privilege. 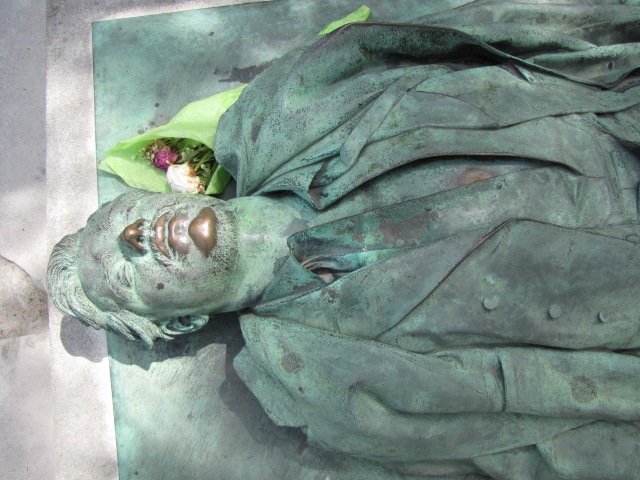 January 11, 1870 in Paris, this little known newspaperman became a cause celeb—thousands of Republicans followed his casket to his first grave in a cemetery in Neuilly, France.

That September the King was overthrown and eventually France established a Republican government. In 1891, Noir, not forgotten by the Republicans, commissioned Jules Dalou, the great French sculptor, to create a bronze statue to honor the fallen journalist and his body was moved to Le Père Lachaise.

The monument to the fallen hero is that of a fallen man. Victor Noir is depicted laid out flat, top hat next to him. Dalou sculpted Noir, as was his practice, very realistically. But the folds in Victor’s trousers make it appear as if he has an erection or at the very least, is a very well-endowed man. A myth grew up around the statue that if a woman kissed his lips and rubbed his “talisman” they would be rewarded with fertility and a better sex life. Some versions of the myth promise single women marriage within a year if the women also leave a flower in his hat.

The myth became so popular that for a time the cemetery officials fenced Victor’s statue to preserve it. But the outcry was so great the fence was removed and women once again made the pilgrimage to Victor’s grave. It is clear from the burnished parts of the monument where the patina has been rubbed off that the myth is alive and well.