Public Enemy #1 betrayed by the Lady in Red or was it Orange?

Posted on January 17, 2015 by gravelyspeaking 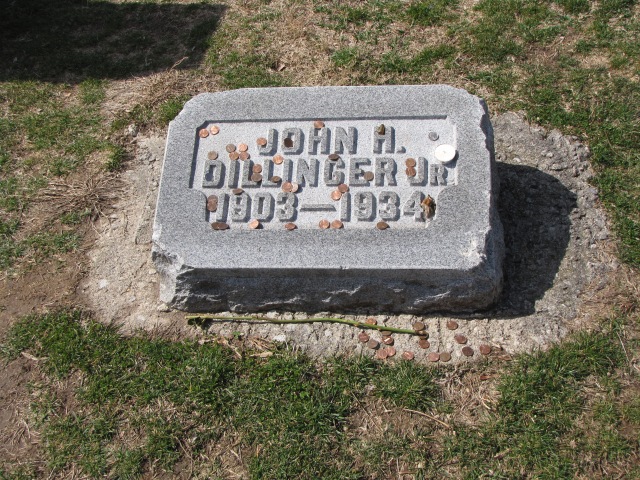 The most notorious Hoosier is undoubtedly John Dillinger, infamous for a year-long crime spree from 1933 to 1934.  Dillinger was born at Oak Hill, an Indianapolis neighborhood but mostly raised in neighboring and rural Mooresville.

At age 31, John Dillinger was wanted by the Division of Investigation, the precursor of the FBI, and was given the moniker Public Enemy #1 by none other than J. Edgar Hoover.  Others had dubbed him “jackrabbit” because of his ability to pull off fast escapes, leaving the pursuing cops in his dust.   In a spree that eluded the police in 4 states, Dillinger and a gang of criminals robbed a number of banks netting over $300,000 in withdrawals.  Many people at that time, the peak of the Depression, sympathized with Dillinger because banks had gone bust and millions of people lost their life savings.  Stories of Dillinger’s exploits fed the newspapers with headlines of daring escapes and robberies.

Dillinger had been jailed in Indiana for a grocery store robbery when he was only 24.  He spent the next 9 years in prison—getting to know many of the hardened criminals who were  serving sentences at the same time.  Within a few months of his release Dillinger and his accomplices had robbed 5 Indiana banks and 4 in Ohio.  Dillinger was captured in Ohio but his gang sprung him loose.  He was captured again in Arizona and sent back to Crown Point, Indiana, to be tried and sentenced.  Dillinger, on March 3, 1934, however, escaped by using a “gun” that he had carved out of a piece of wood and stained black with shoe polish.  To the chagrin and embarrassment of the local sheriff, Lillian Holley, Dillinger used her new Ford as his getaway car!

On July 22, 1934, after more close calls and robberies, Dillinger, was laying low and staying with his girlfriend, Polly Hamilton at Chicago.  Her landlady was Romanian-born Anna Cumpanas Sage.  Sage had been running a brothel and had deportation proceedings started against her.  When she realized that Polly was dating Dillinger she contacted her boyfriend, a Chicago policeman, to see if she could cut a deal for the reward and a promise that the she would not be sent back to Romania.  To escape the stifling July heat, Dillinger planned to go to the air conditioned Biograph Theater to see the latest Clark Gable movie, Manhattan Melodrama.  Sage tipped off the police and they laid in wait for the threesome to leave the theater after the movie ended.  When they left the theater at 10:30 the police were lying in wait.  Anna was wearing an orange dress, which in the glint of the theater lighting looked red.  The police began the chase and when Dillinger drew his gun he was shot—four times.

The Dillinger Family had a plot in the Crown Hill Cemetery at Indianapolis and made arrangements to have their son’s body interred at the cemetery.  Many people who had family members buried at Crown Hill Cemetery, objected to John Dillinger being buried there.  But the cemetery officials stated that the Dillinger family had a right to bury their son with the other family members and the cemetery must “do its duty”.  The day of the funeral, July 25, Crown Point Cemetery closed the gates to onlookers but the family plot was close to the fence and nearly 5,000 gawkers gathered to see the burial.  As Dillinger’s wooden casket was being lowered into the ground a summer squall darkened the skies and rained on the small family funeral huddled underneath the funeral tent.

Rumors circulated that Dillinger had pulled off the hoax of a lifetime—that he was not actually dead after all and someone else was buried in the Crown Hill plot.  In addition to that, the Dillinger family had been offered a great sum of money for John Dillinger’s body which was wanted for a traveling exhibit in a sideshow.  Fearing grave robbery, John Dillinger Sr. arranged to have scrap metal and concrete poured over his son’s casket, as well as, four reinforced cement slabs.  The family also delayed marking the grave for over two years for fear of discretion.

The small gray granite gravestone has been chipped away by souvenir seekers and the stone has been replaced several times.  And even though a president and several vice presidents and many other notables are buried at Crown Hill Cemetery, Dillinger’s grave is one of the most visited.

In fact, the day I visited the grave to snap the picture of his grave a very young couple was there ahead of me.  Out of curiosity, I asked them why they came to the grave.  The young man said that his grandfather had owned the same model car as Dillinger and was about the same age and build when after one of his Indiana bank robberies, the police pulled his grandfather.  After a couple of hours of detention they realized Dillinger had given them the slip and they had the wrong man.

2 Responses to Public Enemy #1 betrayed by the Lady in Red or was it Orange?