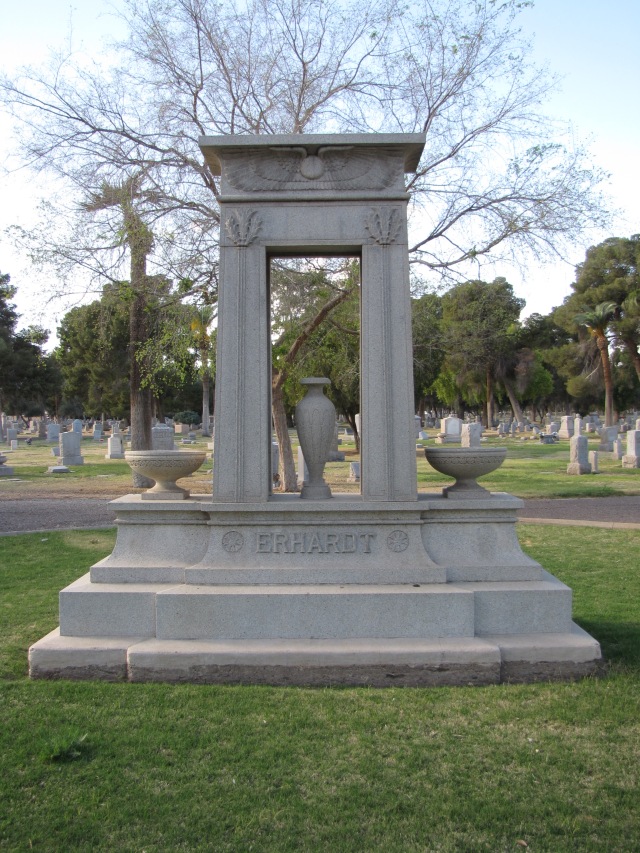 The Erhardt Family Monument in the Greenwood Cemetery at Phoenix, Arizona, is an example of the influence of the Egyptian revival found in American cemeteries in the 19th century and on into the 20th century. Egyptian ornamentation can be divided into three categories—architectural, geometric, and natural.  The monument has a strong and commanding architectural features. The sides of the monument tilt slightly inward forming a doorway, the cavetto cornice curves into a half circle at the top. The monument is geometrically balanced—two urns on each flank and one in the center.

The natural elements of the monument features two winged globes with uroei above the doorway and on the cornice. In this example, there are three sets of falcon wings that are a symbol of the king, the sun, and the sky. The globe represents the Egyptian god, Horus. The uroei, snakes, are waiting to strike. They symbolize the king’s ability to ward off evil spirits.

Along the sides of the doorway are the long slender stems of the lotus flower, sacred to the Egyptian and Buddhist cultures. The Lotus represents purity and evolution. The lotus is born in the water, the primordial ooze—making it also a symbol of creation and rebirth.

The monument gives one the sense of solemnity and a sense of eternity, reminiscent of the temples of the pharaohs.