Posted on January 25, 2014 by gravelyspeaking

The Mars family seems to have had chocolate running through generations of their blood.  The founder of the Mars candy empire was Frank Clarence Mars (September 24, 1883 – April 8, 1934), whose mother taught him how to hand dip chocolate when he was a young man.  He founded the famous Mars Candy Company, the largest candy company in the world which sells some of the best-selling candies of all time.

The Mars Company created famous candy bars such as the Milky Way.  The famous candy bar was not named for the celestial body in which the planet Mars exists.  No, it was named for a milkshake and advertised as a “chocolate malted milkshake in a candy bar.”  They also created the Snickers bar which was named after one the Mars family’s favorite horses.  This candy bar is reported to be the best-selling candy bar of all time!  Today it is still the 4th best-selling candy in the United States, bringing in over $440 million dollars in 2013!

For a time, Forrest Edward Mars (March 21, 1904 – July 1, 1999), son of Franklin, worked in the family business with his father.  A dispute caused a break in their working relationship.  Forrest founded his own company and partnered with Bruce Murrie, the son of a Hershey’s Chocolate Company executive.  In the early 1940s, Forrest and Bruce created tasty little chocolate candies wrapped in multi-colored candy coatings they called M&Ms—Mars and Murrie.  Today, M&Ms are the number ONE selling candy in the United States.  In 2013, $673 Million dollars’ worth of those tasty little chocolate bites was sold in the United States garnering first place in the candy wars.

Forrest returned to run the family business after his father’s death and ran it until his retirement.  Father and son, creators of the largest candy empire in the world, with sales topping 16 billion dollars annually, are both buried in the Gothic-style Mars Family Mausoleum in the Lakewood Cemetery at Minneapolis, Minnesota. 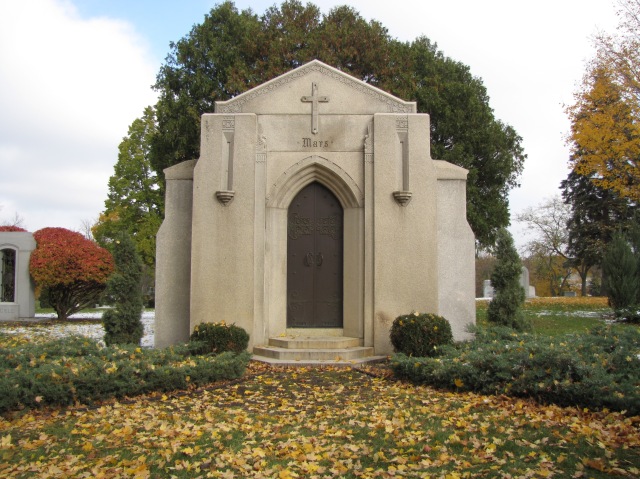 The Mars Family Mausoleum in the Lakewood Cemetery at Minneapolis, Minnesota