Posted on November 14, 2013 by gravelyspeaking 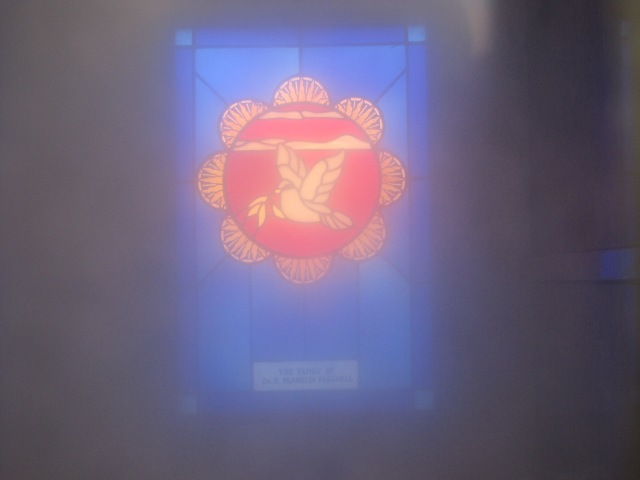 Through the hazy blue dim light of the interior of a mausoleum the dove carrying an olive sprig appears in the stained-glass window.

Many symbols found on gravestones have multiple meanings. The dove is one of those.

Several references in the Bible refer to the dove as a symbol of the Holy Spirit. Matthew 3:16 reads, “And Jesus, when he was baptized, went up straightway out of the water: and, lo, the heavens were opened unto him, and he saw the Spirit of God descending like a dove, and lighting upon him.” In Mark 1:10 the Bible says, “And Straightway coming up out of the water, he saw the heavens opened, and the Spirit like a dove descending upon him.” Again in John 1:32, the Bible reads, “And John bare record, saying, I saw the Spirit descending from heaven like a dove, and it abode upon him.”

Along with the dove symbolizing the Holy Spirit, the dove is also closely associated with peace, often depicted with a sprig of an olive in its beak. This, too, originated in the Bible. After the waters receded in the story of Noah, the dove appears. Genesis 8:11, “And the dove came in to him in the evening; and, lo, in her mouth was an olive leaf pluckt off; so Noah knew that the waters were abated from off the earth.”   It was a sign of God’s forgiveness.

Thus the dove symbolizes the Holy Spirit, peace, and purity.