The Knights of Pythias in Clay

Posted on September 25, 2013 by gravelyspeaking

The Knights of Pythias, a society based on the Greek story of friendship from 400 B. C. between Damon and Pythias, became the very first fraternal organization to receive a charter under an Act of the United States Congress.  The KP symbolism can be found in many cemeteries with their fraternal symbols that come in many forms.

In the small town of Uhrichsville, Ohio, at the Union Cemetery are many gravestones made of red clay.  The town had a tile company and as the story goes a craftsperson in the tile company began fashioning markers out of the clay.  These unique markers are made in the rustic tradition–to look like tree stumps.  The clay certainly helps with that look especially when sprigs of saplings are growing from the tops!  Just as in traditional markers, the clay markers are were created with much diversity in design. 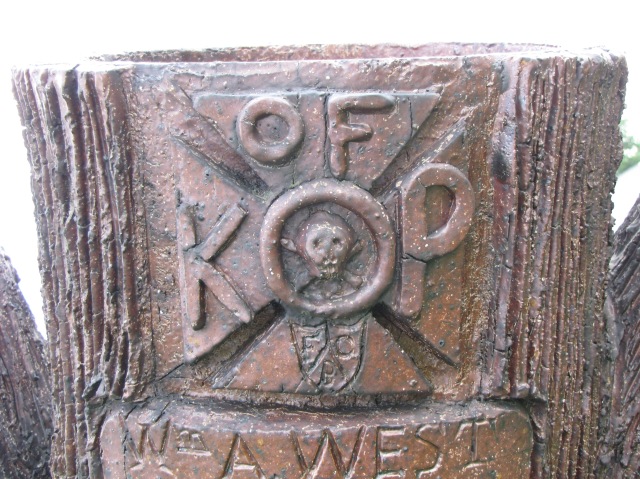 The symbol in the marker above features many of the symbols that are significant to the Knights of Pythias.  In the shield are three letters, “F”, “C”, and “B”, which stand for their motto, FRIENDSHIP, CHARITY, and BENEVOLENCE.  The circle inside the cross displays the skull and cross bones.

Note: I first saw the gravestones above at the Union Cemetery on the Website: www.graveaddiction.com.  Beth Santore, the Webmaster, has photographed hundreds of cemeteries in Ohio, as well as, making photo forays into neighboring states.  I highly recommend her Website, especially for those tramping around Ohio graveyards!

1 Response to The Knights of Pythias in Clay