Posted on April 8, 2013 by gravelyspeaking 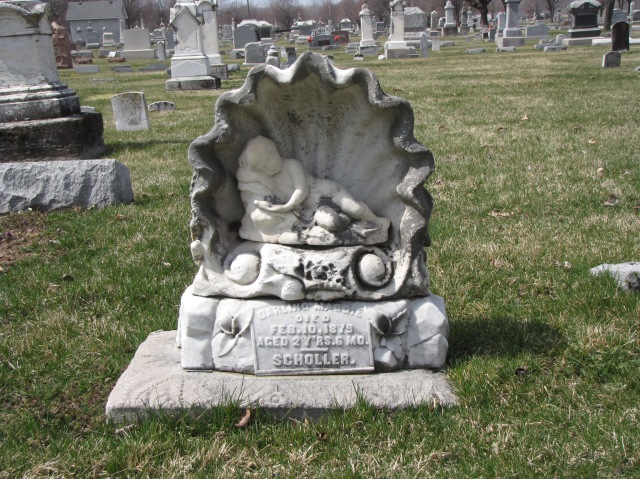 This monument in the Rest Haven Cemetery at Edinburgh, Indiana, shows a sleeping Maggie Scholler, aged 2 years and 6 months, nestled into a pillow tucked into a sea shell.  This gravestone very well could be a metaphor for the shell that contains a pearl, the shell that opens and reveals a precious jewel, in this case, this tiny baby girl.  The shell is also a symbol of baptism because of its obvious association to water.  In fact, a shell is often used to scoop up and sprinkle water during the baptismal ceremony.

The sea shell is also associated with Saint James, somtimes referred to as James the Greater, was one of the Twelve Apostles.  In some church traditions, James’ mother is reported to be the sister to Jesus’ mother, Mary, making Jesus and James first cousins.  Tradition also has it that the remains of the Saint were taken to the Cathedral of Santiago de Compostela in Galacia, which is in the north of Spain.

Saint James became the patron saint of Spain during the reconquest of the country from the Moors and the Cathedral of Santiago de Compostela became a popular site for Christian pilgrims.  Galacia, noted for delicious seafood, including scallops, drew thousands of Christians pilgrims who often carried a scallop shell back with them as a souvenir of the trip.  Before long, the sea shell became a symbol of Christian pilgrimage.

This entry was posted in Children's Graves. Bookmark the permalink.