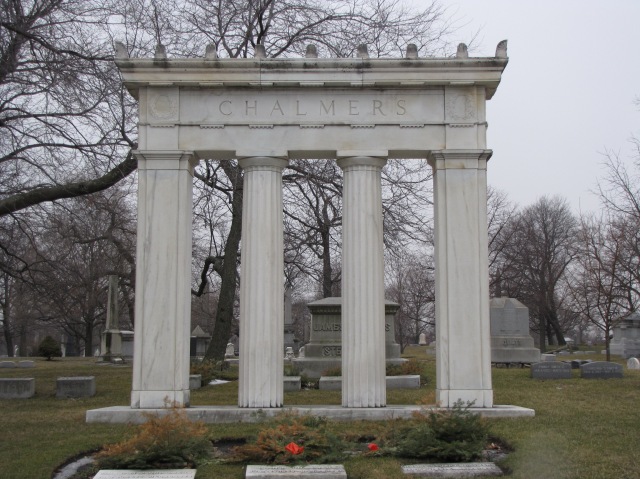 The Chicago-based Graham, Anderson, Probst, & White Architectural Firm, at one time the largest in the United States, took many types of commissions including design work for cemetery monuments.  The Chalmers Monument, in 1924, in the Graceland Cemetery at Chicago, Illinois, is an example of the neo-classical designs that helped make the firm famous.

Many recognize the name Chalmers from the orange tractors that bore the name—Allis-Chalmers.  The Allis-Chalmers tractors came about when Fraser and Chalmers, a manufacturing company that produced mining equipment, merged with Allis Engine Works to produce farm equipment.

The four-column white marble monument is of the Doric order—characterized by the two fluted central columns with no base resting directly on the stylobate, slightly curved and unadorned capital. The architrave (stone panel that traces around the monument just above the column) is truncated and plain, as is the frieze which is generally enhanced with triglyphs and bas-reliefs. The frieze in the Chalmer’s monument is adorned with a wreath on either side. The laurel wreath dates back to Roman times when soldiers wore them as triumphal signs of glory. The laurel was also believed to wash away the soldier’s guilt from injuring or killing any of his opponents. In funerary art the laurel wreath is often seen as a symbol of victory over death.

The monument’s cornice is topped with acanthus stone work called acroterion–a stylized palm leaf motif that can be found on classical Roman and Greek architecture. This motif has its origins in Egyptian art and architecture.

The monument was constructed for William and Joan Chalmers after the death of their son, Thomas.  William was the son of Thomas and Janet Tesler Chalmers, two Scottish-born immigrants to the United States.  Joan was the daughter of the famed private detective Allan Pinkerton and his wife, Joan Carfrae Pinkerton, also Scottish immigrants.

The story, nearly as old as humankind, goes that Joan’s father Allan did not want William and his only daughter, Joan, to get married and vehemently opposed their marriage.  William was described as a dashing and handsome young man and Joan was reported to be a striking brunette, both of them loved music and the arts.  And, as happens in many of these stories—the union between the two young people proceeded in spite of the objections of Joan’s father, October 21, 1878, two years after they had been introduced. The wedding took place at the Third Presbyterian Church with Dr. A. E. Kittredge officiating.

Allan Pinkerton’s prediction that William wouldn’t amount to much was wildly incorrect.  The super sleuth may have been a fine detective but he misjudged the character and drive of William Chalmers, the man who became his son-in-law, who inherited and grew his father’s company, Fraser & Chalmers, was President of the Commercial National Safe Deposit Company, was elected to the Chicago Board of Education, and had a long list of other accomplishments including: Director of World’s Columbian Exposition; President of the Commercial Club of Chicago; Director of the Field Museum of Natural History; Member of the Union League Club, Chicago Athletic Club, Lake Geneva Country Club, Saddle and Cycle Club, and the Engineers Club of New York.