Posted on December 21, 2012 by gravelyspeaking 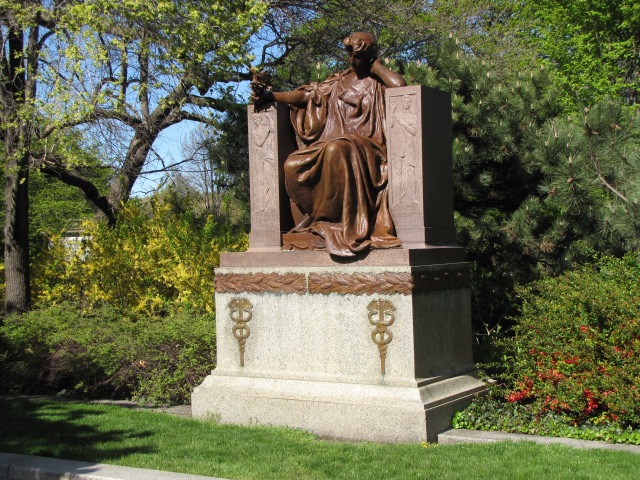 In a rags-to-riches story suitable for Horatio Alger, Marshall Field, who started as a clerk in a dry goods store, ended up buying the store in which he worked in 1865.  By the time Field died in 1906, he was the wealthiest man in Chicago.

The Field Family Monument in the Graceland Cemetery at Chicago, Illinois, is suitable for a man of Field’s station.  The dramatic 7 foot tall seated bronze figure, Memory, has her bowed, in her right hand she is holding a sprig of oak leaves—a symbol of strength and courage.  The fronts of the arms on the large granite chair have carved upon them the statues of Integrity and Equity.  The base of the monument has a bronze band adorned with pine and pine cones signifying immortality or everlasting life. Also displayed on the base are a pair of caduceus, traditionally recognized as the symbol of medicine.  However, the staff of Mercury is also an ancient symbol of commerce, a nod to the Field’s success as a merchant.

The monument was designed by Henry Bacon, a prominent New York architect, and famed sculptor Daniel Chester French.  It is not difficult to look at the seated figure as a precursor to the most famous sculpture of French’s career—another seated figure—Abraham Lincoln showcased in the Lincoln Memorial.

The Lincoln Memorial, like the Marshall Field Family Monument, was also a partnership between Bacon and French, with architect Henry Bacon designing the Memorial and French carving the iconic statue of Lincoln. 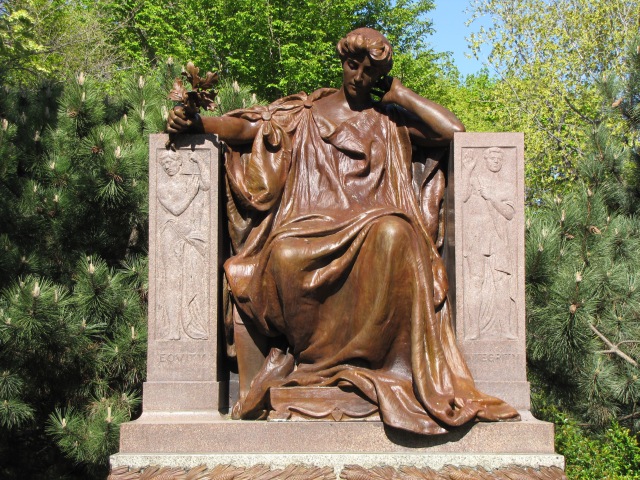