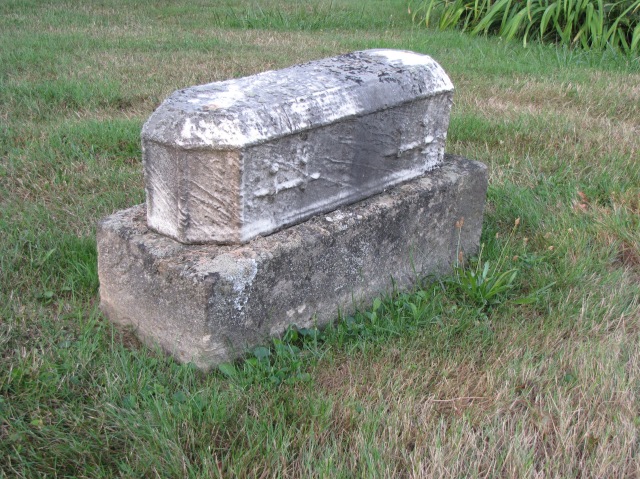 This white marble coffin-shaped gravestone found in the Union Cemetery at Morristown, Ohio, is intricately carved to look like a coffin.  The gravestone has handles on the side and the exact shape and dimensions of a coffin that are so real it looks as if a coffin was actually set atop the concrete base.  The gravestone is most likely the marker for a small child.  Though the tombstone looks fairly good sized in the photo, it is actually quite small.  Because of the aging and erosion of the soft marble and the lichens on the gravestone, it is not possible to read the inscription.

Note: I enjoy tramping around old graveyards and also Websites dedicated to cemeteries and gravestones.  I first saw the gravestone above on the Website: www.graveaddiction.com.  I asked the Webmaster, Beth Santore, about the gravestone and she gave me great directions to find it.  I was just in Ohio yesterday and snapped some pictures of the gravestone for myself.  I highly recommend her Website, especially for those trapsing around Ohio graveyards!

This entry was posted in Symbolism, Tombs, Uncategorized. Bookmark the permalink.