Posted on January 14, 2012 by gravelyspeaking

Ordinarily I don’t write about graves, tombs, or funerary symbolism outside of North America, but this is a brief interlude into the world outside my regular “beat”.  I took these photos when my family and I were on vacation in Seville, Spain, and touring the awe-inspiring Seville Cathedral, the largest Gothic Cathedral, and the third largest church in the world.  I was struck by the magnificance of the Columbus Tomb designed in the romantic-style by artist Arturo Melida.  The four mace bearers carrying the mortal remains of Christopher Columbus represent the four kingdoms–Castile, Leon, Aragon, and Navarra–that were under Spanish rule when Columbus left on his 1492 voyage of discovery.  Then I was struck by the mystery and contraversy of who might actually be in the tomb since there has long been a lingering doubt.
Christopher Columbus, famous for his voyages to the New World, traveled more after he died than most people do during their lifetimes.   He died in Spain in 1509, and was originally buried at Valladolid, Spain.  After his will was read, the remains of Christopher Columbus and those of his son, Diego, were shipped to the Caribbean island of Hispanola (modern-day Dominican Republic and Haiti) in 1537 making what was thought to be his last trans-Atlantic passage. Christopher Columbus and Diego Columbus were buried along side the remains of Christopher’s brother, Bartholomew, in the Cathedral of Santa Maria in Santo Domingo.  They rested there underneath the altar of the church for over two and a half centuries.
But France won dominion over the Spanish territory in 1795.  To protect the remains of Columbus the Spaniards shipped an unmarked casket and the remains within to the island of Cuba, to be reburied in Havana.
The Dominican Republic, however, claimed that Columbus’s dust and bones remained in Hispanola. To bolster their claims, they shared the discovery of a box that had been uncovered in the Santo Domingo cathedral, in 1877,  with an inscription “C.C.A” on the outside of the lead box.  Inside the box the inscription read, “The illustrious and excellent man, Don Colon Admiral of the Ocean Sea.”  The title of the Admiral of the Ocean Sea had been conferred on both Christorpher and his son, Diego.  Also, both were referred to as Don Colon.  The authorities in Santa Domingo declared that they held the remains of Christopher Columbus because the lead box they had in had the intials C. C. A.–Cristobal Colon, Admiral. The Spanish rejected that claim, with the theory that the majority of Christopher Columbus’s remains were in their possession, while some may have been left behind.
After the Spanish-American War and the defeat of the Spanish, Columbus was on the move again and the unmarked casket made its last ocean voyage in 1898 to Seville, Spain, to finally dock in the tomb in the Seville Cathedral.
However, DNA analysis of bone fragments from the Tomb in Seville were compared to the bone fragments and dust from the Seville tomb of Christopher’s brother Diego Colon which happen to be a perfect match. Researchers announced the results in 2006, hoping to put an end to the contraversy. But one aspect of the case was left unturned–the DNA from the Dominican Republic was not not analyzed, the contraversy remains to this day. 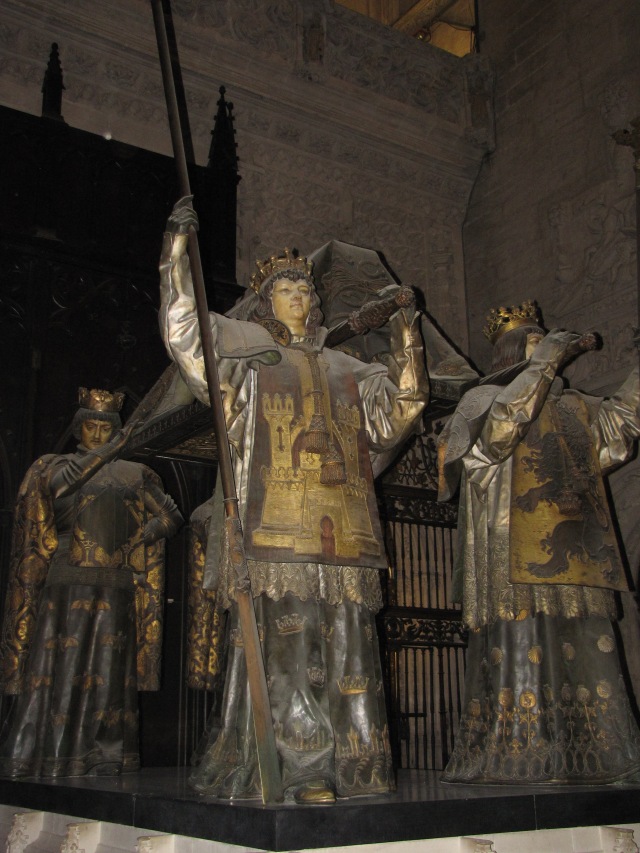 2 Responses to The last two ocean voyages by Columbus