Posted on January 2, 2012 by gravelyspeaking 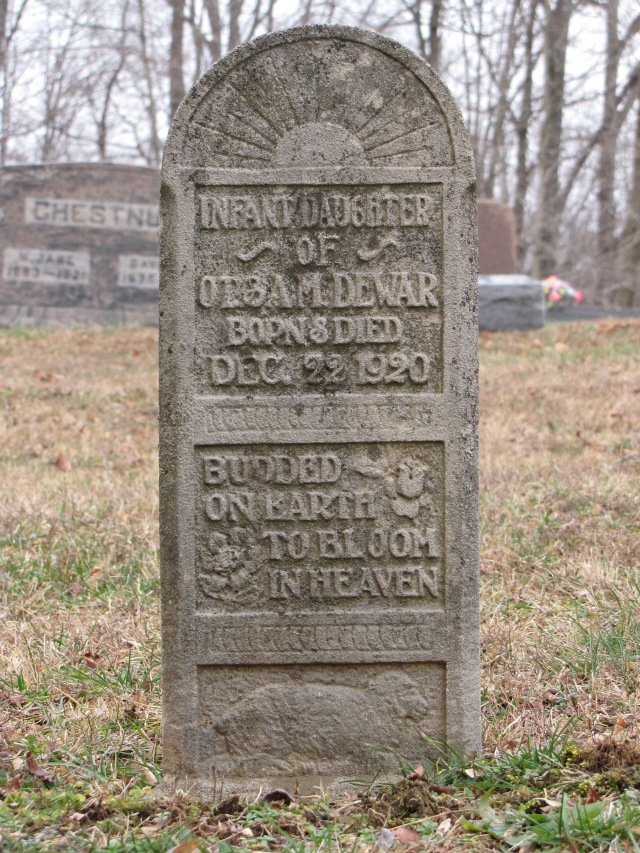 For me, the hardest gravestones to look at are the ones for children.  They speak to the father in me.  I can look at them and understand the grief and the sorrow that the parents felt at the loss of a child, though, I cannot not personally bear the thought of what it must be like to endure.  I am often reminded of the feelings expressed by President Grover Cleveland, when he buried his daughter, “Baby Ruth”.  He could not quite get over the feeling that as his 12-year daughter lay in the coffin, that she was cold.  It haunted him.  It is those kind of irrational feelings and thoughts that people have during funerals.  I remember when my father died, my Uncle Fred asked me if I had taken shoes up to the funeral home for my Dad.  He said with a tear in his eye, “Brother Wilbur has always had cold feet.”

The bottom of this gravestone for a one-day old infant girl, who was born and died three days before Christmas in 1920, displays the iconic lamb motif–found almost exclusively on children’s gravestones.  The lamb is the symbol of the Lord, the Good Shepherd.  It also represents innocence, likely the reason why this motif usually adorns the tombstones of infants and young children.  Most often the lamb is lying down, often asleep, a euphemism for death.

This gravestone also has carved on it, one of the epitaphs associated with children, “BUDDEN ON EARTH TO BLOOM IN HEAVEN.”  What is unusual about this treatment is that the carving of the two flowers on the gravestone illustrate the epitaph by displaying a bud and then a flower in full bloom.

In the half-circle of the top of the rounded-top tablet is a rising sun.  Often it is difficult to discern whether the sun is setting or rising.  That has long been a problem to know which is which.  In fact, Benjamin Franklin had the same difficulty at the Constitutional Convention of 1787 upon looking at the picture of the sun painted on the back of the President’s Chair.  Franklin said, “I have often looked at that picture behind the president without being able to tell whether it was a rising or setting sun. Now at length I have the happiness to know that it is indeed a rising, not a setting sun.”

Franklin was making a statement about the work that had been completed by the delegates to the convention and his view of what it meant for the United States.  In funerary art, however, it is less about commentary and more about what the carving looks like.  In this motif, the rays eminating from the sun usually indicate that it is a rising sun.  The rising sun motif represents resurection and a renewed life.

This entry was posted in Epitaphs, Symbolism. Bookmark the permalink.