Posted on January 25, 2020 by gravelyspeaking 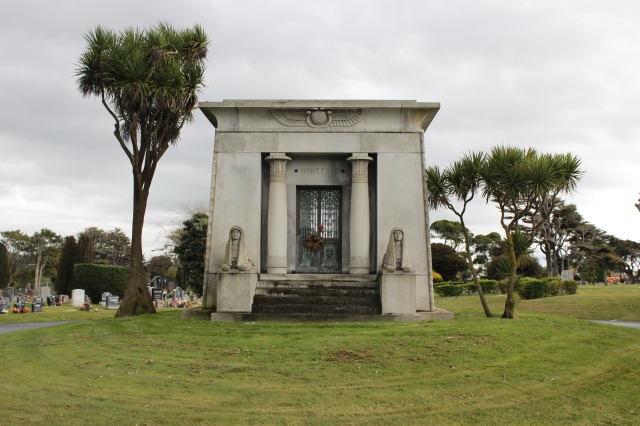 George Whittell, Jr. was born rich—very rich.  His grandfather invested in real estate during the California Gold Rush and made a fortune.  Whittell made the decision not to enter the family business but to follow a life of leisure.  He had two failed marriages, both brief and to chorus girls.  His third marriage was to Elia Pascal, the nurse he met while wounded and serving in France as an ambulance driver.

Whittell pursued the life suitable to a multimillionaire, building a home near Lake Tahoe he named Thunderbird Lodge, and adding to his growing collection of Duesenbergs.  He was prescient about the Stock Market—taking out 50 million dollars of his investments out of the market only months before the crash which insulated him from the Great Depression.  Though, Whittell was considered a relatively private person, he did throw lavish parties in his home and on his 55-foot mahogany yacht, also bearing the name Thunderbird.  His lavish mausoleum in the Cypress Lawn Cemetery in Colma, California, is a testament to his fortune. 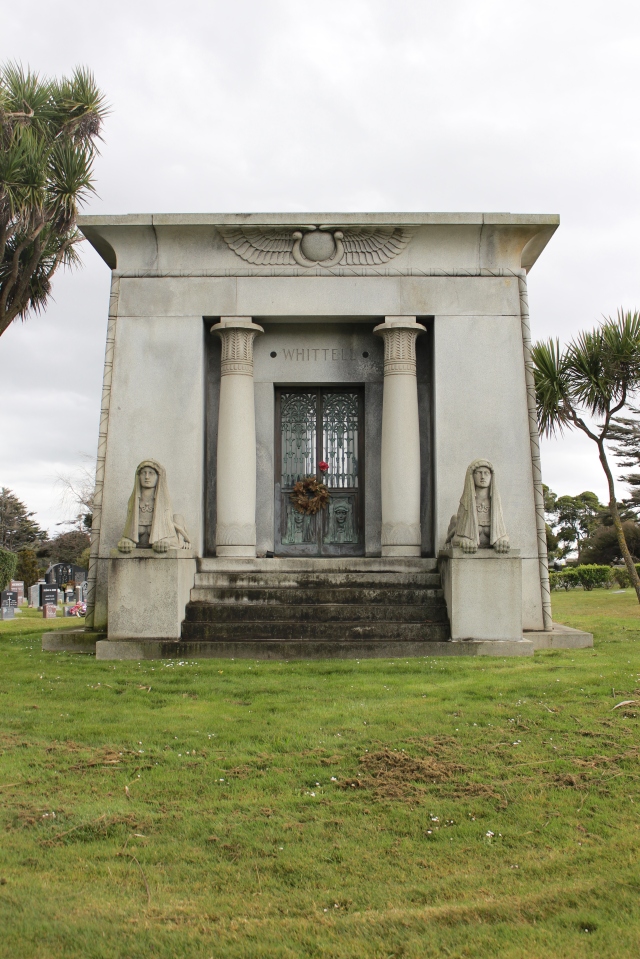 The Whittell Mausoleum is an example of the Egyptian Revival architecture found in many large urban cemeteries.  The Egyptian Revival was an architectural movement that swept the United States and Europe.  The movement in America was influenced by three separate events—the first was Napoleon’s defeat of Egypt in the 1790s.  Later Napoleon published the results of his scientific expedition, which was printed in serial form, the last released in 1826.  The second event was when the so-called “Cleopatra’s Needle” was erected in Central Park in New York on February 22, 1881.  Lastly, “Egypto-mania,” as some called it, reached fever pitch in November 1922 when King Tut’s tomb was discovered, and the news flashed around the world. The influence of the Egyptian Revival was reflected in buildings in the United States as early as the 1820s.  The revival was also found in American cemeteries in the 19th century and on into the 20th century. The obelisk, and ancient Egyptian form, is ubiquitous in cemeteries across the North American continent.

The mausoleum has many features of Egyptian temples such as the cavetto cornice that curves into a half circle at the top of the tomb.  Also, the torus molding at the bottom of the cornice and around the corners of the mausoleum are designed to emulate long bundled plants.   Another feature of Egyptian architecture are the heavy columns that flank the doorway with palm leaves at the top. 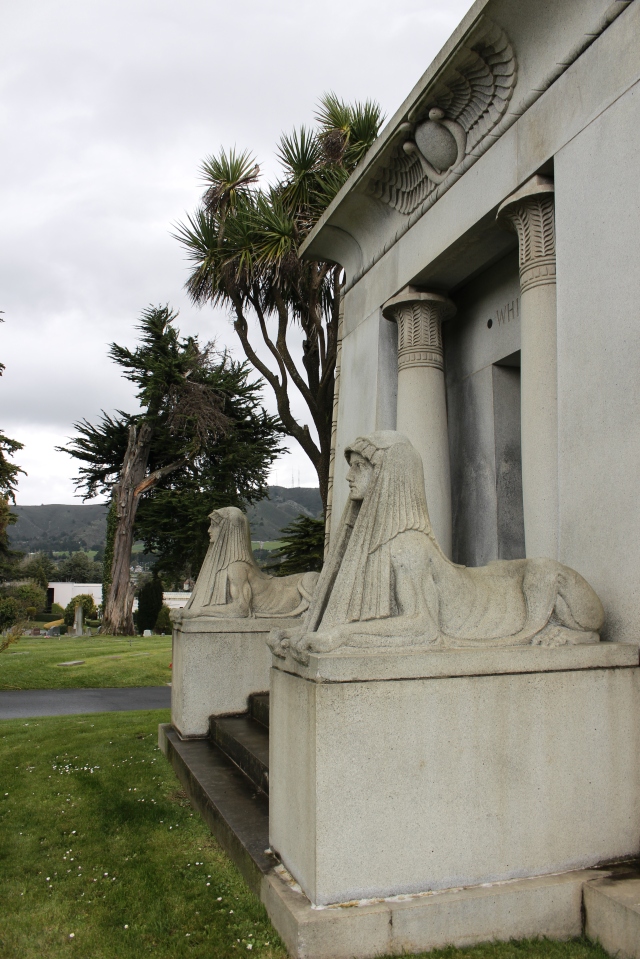 The Whittell Tomb also features a winged globe with uroei cavetto cornice above the doorway.  In this example, there are three sets of falcon wings that symbolize the king, the sun, and the sky.  The globe represents the Egyptian god, Horus.  The uroei, snakes, are waiting to strike.  They symbolize the king’s ability to ward off evil spirits.

The globe and uroei symbolism is repeated in the amulets around the necks of the sphinxes on the panels on the lower third of the bronze doors leading into the mausoleum.  The steps lead up to a pair of bronze doors that feature lotus flowers and buds.

The entryway is guarded by two large couchant sphinxes.  The most famous sculpture of a sphinx is the Great Sphinx of Giza outside of Cairo, Egypt.  In the Egyptian tradition the benevolent mythological creature has the head of a man and the body of a lion.  However, In the Greek tradition the sphinx is usually depicted as a woman, sometimes with wings.  This example is in the Greek tradition.  In addition to the gender difference, the Greek sphinx is considered a malevolent being.

The massive tomb gives one the sense of solemnity and a sense of eternity, just as the temples of the pharaohs.