Posted on September 22, 2019 by gravelyspeaking 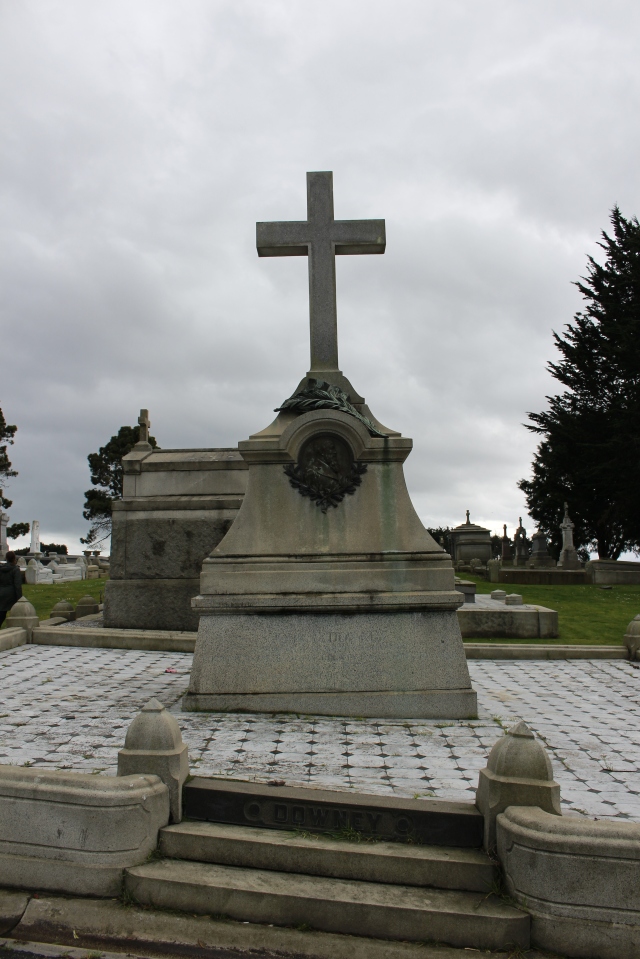 John Downey was the 7th Governor of California—the youngest to hold the office and only the second to be born outside the United States—he shares that distinction with Arnold Schwarzenegger.  He immigrated to the U. S. in 1842 at a young age.  He began work as an apothecary and was a successful businessman plying his trade first in Washington, D.C., then Ohio, and finally in San Francisco.  It was after he moved to Los Angeles that he became involved in Democratic politics.  He served for as Governor for two years at the outbreak of the Civil War.  Upon leaving politics he turned to business interests in banking.

In 1883 on a train trip, Downey, along with his wife, Maria, were involved in a violent train accident at Tehachapi Pass in Tehachapi, California, when their train jumped the tracks and plunged into a ravine. Governor Downey was pulled out of a railcar window by a porter, injured but alive, but Mrs. Downey was dead. She was pinned in the fiery wreckage and could not be saved.  Some reports indicate her body was never found while others indicate that her body was at first misidentified.  Whatever the facts, it is clear that the Governor never quite recovered from the accident.  Downey suffered for the rest of his life from what was described as “nervous shock.”  He did go on to remarry Rose Vincentcia Kelly some years later but she died a year and some months before the Governor.

Governor Downey died, March 2, 1894.  The Los Angeles Herald headline read, “JOHN G. DOWNEY DEAD. The Old Pioneer Passes Quietly Away. His Death Occurred Shortly After Noon, Yesterday.  His Demise Due to Pulmonary Apoplexy—…Ex-Gov. John Q. Downey died shortly after 12 o’clock yesterday noon at his residence, No. 345 South Main street. His death was a great surprise to the majority of people, many of whom had seen him but recently in perfect health. His fatal sickness dates from last Sunday. On that day, in company with an old-time friend, Maj. J. 11. Coleman, he took a carriage drive through East Los Angeles. The governor had a slight cold and it was thought the ride would benefit him. On the return Major Coleman remarked to the governor that his ride seemed to have helped him, to which the governor replied in the affirmative. In the evening while seated on the edge of his bed be was seized with an apoplectic fit and fell to the floor, hurting his head. For a time that night (Sunday) the governor wandered about the house, but was finally quieted and put to bed. On Monday Dr. K. D. Wise, bis family physician, was called. He found that Governor Downey was affected with both pulmonary and cerebral apoplexy. By repeated applications of ice the latter was reduced, but it soon became apparent to Dr. Wise that Governor Downey would be soon die. On Tuesday Father Fitzgerald told the’ governor to prepare for the worst, at which he expressed the desire to confess to Father Hartnett, the pastor of the Church of the Sacred Heart of East Los Angeles, and who has been bis favorite confessor. Accordingly, on the same day the sick man was beard by the priest. On Wednesday Governor Downey became very low and it was known that he had but a few hours to live. Up to the time of his death, however, he was rational and did not appear to be in a serious condition.

“Yesterday morning; when it was positively known that he would die then the members of the house gathered by the bedside. There were present Bernard Downey, his relative, Miss McElroy, the housekeeper, Mrs. Fallon, his sister-in-law, Peter Martin, his nephew, and Major Coleman, hit friend. A few minutes after the noon hour the governor fell into a quiet sleep from which he never rallied, passing away at 12:20. The remains were taken into the parlor where a few friends viewed them preparatory to embalmment. Dr. Wise stated yesterday that death was due to pulmonary apoplexy and that there might also have been a touch of pneumonia. The sisters of the deceased. Mrs. Donohue of San Francisco and Mrs. Martin of San Jose were at once notified of the death, and the burial will not be determined until their arrival here.”

The monument erected in the Holy Cross Catholic Cemetery in Colma is a cross built on a raised platform of black and white tile.  Just below the cross is a bronze medallion profile portrait of the Governor.  Above the medallion is an open book with two symbols—the Chi-Rho (XP), one of the oldest Christian symbols and form the first two letters of Christ’s name from the Greek alphabet.  The other Greek letters appear on the opposing page—alpha and omega between an anchor.  Alpha is the first letter of the Greek alphabet and Omega is the last.   These letters refer to the Biblical passages (Revelation 21:6, 22:13) where Christ is quoted as saying, “I am the beginning and the end.”  The anchor has long been a Christian symbol representing the Messianic hope that Christ will return.  All three Christian symbols are a nod to Governor Downey’s deep Catholic faith.  The Laurel leaves underneath the medallion portrait symbolize victory over death.

The sculpture was executed by Rupert Schmid who was a bit of a cause celeb as an artist of his day.  Schmid was born in Egg, Germany, and immigrated to the United States after art training at the Royal Academy in Munich.  He fast became a well-known sculptor completing well-publicized commissions for many private busts and sculptures of the well-healed of San Francisco.  Like many great artist’s works can be found in North American cemeteries, including those sculpted by Daniel Chester French, Augustus Saint-Gaudens, Aldabert Volck, Felix Weihs de Weldon, Karl Bitter, Martin Milmore, Alexander Milne Calder, T. M. Brady, Albin Polasek, Harriet Whitney Frishmuth, William Wetmore Story, Edward V. Valentine, Nellie Walker, Lorado Taft, Sally James Farnham, Adolph Alexander Weinman, Solon and John Gutzon Borglum, and Robert Aitken, among others—a veritable who’s who in the art world.  These artists were able to earn a living creating sculptures, public and private—thus the medallion portrait of Governor Downey’s for his funerary monument.

However, what brought Schmid his greatest fame was the contest he held to find the most beautiful woman in California—which he then sculpted for the World’s Exposition in Chicago in 1893.  The statue became known as the “California Venus.”  This not only brought a certain amount of fame to Schmid but also to 16-year Marian Nolan, the model for the sculpture.  That fame also brought admirers, including those who stalked her.

The article went on to describe the tragic incident, “MADDENED by jealousy and disappointment in his love, Edward Marshuts, formerly a stenographer, last evening shot and fatally wounded Marian Nolan, who for years was acknowledged to have been on of California’s most beautiful women. After wreaking vengeance on the woman, Marshuts turned the weapon on himself and fired a bullet into his own brain, killing himself instantly.  The double tragedy occurred on O’Farrelll street, between Jones and Leavenworth, and produced one of the most frightful scenes ever witnessed on the streets of this city.  A number of residents on O’Farrell street witnessed the shooting and rushed immediately to Miss Nolan’s assistance.  An Ambulance speedily summoned, but Marshut’s aim had been true and death ensued before she could be taken to the Central Emergency Hospital.

“…Miss Marian Nolan was formerly the wife of Senor Santiago Cabrara, a wealthy Mexican planter.  She was famed for her beautiful figure all over the United States.  During the World’s Fair in Chicago, Marian Nolan’s figure was sculptured by Rupert Schmid and exhibited in the White City as the “California Venus.”  She also acted as the model for the statue of liberty that crowns the dome of the San Francisco City Hall.” Yesterday afternoon Miss Nolan was returning to her home at 736 O’Farrell street when Marshuts met her and demanded that he be allowed to accompany her. She evidently did not desire his company, as the people who saw them walking up O’Farrell street heard them quarreling. After they passed Jones street Miss Nolan was seen to strike Marshuts on the head with her umbrella and to strike him with her fists. She was obviously in a great rage and did not want him with her. He followed her with his entreaties until they reached the middle of the block. At that point she broke her umbrella handle on his head.”

He then pulled his revolver from his hip pocket and shot her. The first shot, which he fired evidently without aim, went wild, but the second struck the unfortunate woman in front of the right ear, passed completely through her head and came out in front of the left ear. The man then turned his weapon on himself. The bullet struck him above the left ear and passed into his brain, bringing death instantly. So quickly did he wield his deadly pistol that it seemed to the witnesses that both the man and the woman were shot at the same instant, as both fell to the ground together.

Fame is a double-edged sword.