General Stonewall Jackson and His Arm

This photo taken by Paul Breda

The statue commemorates the grave of the Confederate Lieutenant General Stonewall Jackson, considered one of the greatest military tacticians during the Civil War.  Jackson was shot by “friendly fire” during a reconnaissance trip after a successful flanking maneuver at the Battle of Chancellorsville.  He and eight aides were returning to camp late at night on May 2, 1863.  A skirmish broke out and gun fire was exchanged.  Four of Jackson’s aides were killed and Jackson was mortally wounded.  In the darkness and the confusion of war, the 18th North Carolina Infantry had mistakenly fired upon General Jackson.

The next morning, at the makeshift field hospital at Wilderness Tavern, General Jackson’s left arm was amputated.  Upon hearing the report of General Jackson’s death, General Robert E. Lee sent word to Jackson through Reverend Beverly Lacy, “Give General Jackson my affectionate regards, and say to him: he has lost his left arm but I my right.”

Jackson’s chaplain, Reverend Lacy went to visit him as he lay in a tent convalescing.  Upon leaving, Lacy saw Jackson’s amputated arm outside the tent.  Lacy gathered up the arm in a blanket and walked across a field to his brother’s farm, Ellwood Manor, where he buried the severed arm.

(Years later, Reverend James Power Smith, who served on Jackson’s staff, erected a gray granite gravestone to mark the spot where the arm was buried.)

Jackson was removed to Guinea Station where he died on May 10 of infection and pneumonia.  His remains were buried in a family plot in the Presbyterian Cemetery in Lexington, which was later renamed for him.  Though his white-marble gravestone still remains in its original place in the family plot, his remains were removed along with other family members to repose underneath the statue erected in his honor.  Though Jackson was reunited with his family members under the great statue, he was not reunited with his left arm which rests miles away in a cemetery on Ellwood Manor.

The plaque in front of his original gravestone reads:

HAVE BEEN REMOVED FROM THIS SPOT

AND NOW REPOSE UNDER THE MONUMENT

IN THIS CEMETERY ERECTED TO HIS

MEMORY BY HIS LOVING COUNTRYMEN. 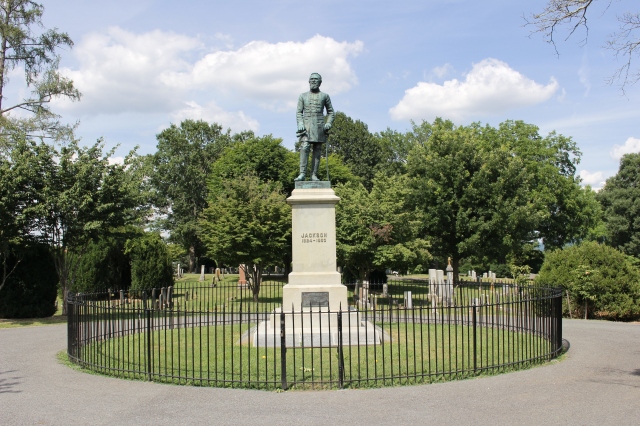 Those graves marked underneath the statue:

2 Responses to General Stonewall Jackson and His Arm